Stephen Glain has been a journalist for more than 25 years, beginning in Hong Kong where he worked for local South China Morning Post and the International Herald Tribune before settling at the Wall Street Journal. For the next ten years, as a Journal correspondent, Glain covered Asia and the Middle East from bureaus in Seoul, Tokyo, Tel Aviv and Amman. Now based in Paris, he has reported and interpreted global affairs for The New York Times, The Washington Post, Foreign Policy, Newsweek, Salon, The Nation, Institutional Investor and other publications. He has appeared on such television and radio programs as Hardball with Chris Matthews, Joe Scarborough's Morning Joe, NPR’s Talk of the Nation, WNYC’s The Leonard Lopate Show, and PRI’s The World. Glain’s most recent book, State vs. Defense: The Battle to Define America’s Empire, is a forensic account of America's foreign policy militarization since the end of World War II. The book was praised by The Atlantic for its “much-needed insight into how ... we really are a nation of soldiers.” Both The Progressive and Small Wars Journal named State vs. Defense one of the top books of 2011. Kirkus Reviews lauded the book for its "smoldering focus and marshaled evidence” while Reuters called it “a smart guide to a major behind-the-scenes Washington story [which]…will rise in magnitude.” The Council on Foreign Relations recommended State vs. Defense for its “deft prose” and “first-rate historical research.” Glain’s first book, Mullahs, Merchants, and Militants: The Economic Collapse of the Arab World, heralded a dark future for the Middle East a decade before the Arab Spring and its aftermath convulsed the region. Published in 2004, the book warned that a generation of autocracy and joblessness would lead to regional collapse “with consequences both terrible and sustained." Like Mullahs, Glain’s articles and reportage have aged well. His reporting from South Korea in the mid-1990s presaged that country’s economic collapse amid the Asian currency crisis a half-decade later. Two years before the coarsening of U.S.-China relations, Glain blogged from Newsweek’s Beijing bureau in 2007 that with the passing of the Bush administration and its anti-terror war, Washington and Beijing "will get on with the serious business of bludgeoning each other.” In spring 2008, Glain forecast in an article for Newsweek the economic convergence of China and the Middle East as a “New Silk Road” that would help China survive the global economic crisis and spare the world an even deeper recession. Long before the ousting of Egyptian dictator Hosni Mubarak, Glain anticipated revolution in Egypt and the coming to power of the Muslim Brotherhood. Mubarak, he wrote for The National Interest in fall 2005, "is unwittingly plotting his regime's demise" by refusing to neutralize rising discontent with political reform. A year later, in a blog post for The Nation, Glain warned that Washington's policy of sidelining the Brotherhood "will only raise the price of dealing with its leaders when there is no one else in Cairo to talk to." In 2009, Glain wrote in The Nation that Mubarak’s autocracy and corruption would lead to “general chaos” and “the army … in the streets.” In an August 2011 report for The Nation, he provided an in-depth look at the fracturing of the Muslim Brotherhood – a prospect he foretold in a February 8 blog post for the magazine. Last updated July 2017

Evidence emerges of the Muslim Brotherhood’s cooperation with the Egyptian military — sparking tensions between the Brotherhood’s old guard and new. 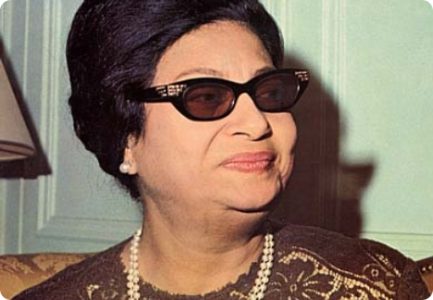 Sheik Mohammed Farahat was waiting patiently for me when we met for dinner recently in downtown Cairo. He is a prominent Salafi cleric, which means he and his followers interpret Islam with a rather antique set of reference points… 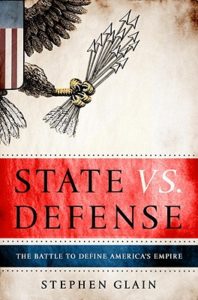 How sixty years of American militarism created the Cold War, fanned decades of unnecessary conflict, fueled Islamist terror, and could bankrupt the country. 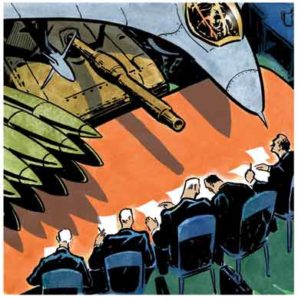 How the Pentagon is asserting new control over US foreign policy with its own vast programs of foreign aid and “military operations other than war.”