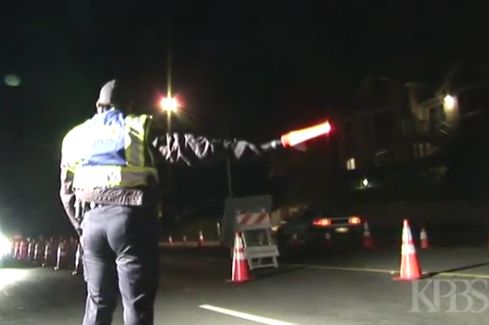 Escondido police at a DUI checkpoint

On a spring morning in 2010, Leticia dropped two of her children at their Escondido school and continued on to run errands with her 4-year-old daughter. Before long, she was stopped at a police checkpoint.

According to retired San Diego police officer Carlos Ronquillo, who witnessed the incident, Escondido Police were conducting a DUI checkpoint at 9:30 in the morning.

Because she did not have a driver’s license, Leticia (not her real name) was suspected of being an undocumented immigrant and officials with U.S. Immigration and Customs Enforcement (ICE) were notified.

Ronquillo watched as Leticia was handcuffed and separated from her 4 year old, a U.S. citizen. Within hours, the 34-year-old mother of four was taken to an immigration holding facility, processed, and deported to Tijuana. After living in Escondido for more than 10 years, Leticia was separated from her four children for the first time.

Escondido has a population of 145,000, 49 percent of whom are Latino. In the past several years, the city council has enacted ordinances and legislation directly targeting the growing Latino and undocumented-immigrant population.

In 2006, landlords were banned from renting to anyone without proof of legal residency — a restriction quickly struck down by the courts as unconstitutional. Soon after, restrictions on food carts and parking in Latino neighborhoods were proposed. Tension between the city and the Latino and immigrant population escalated.

Then in 2010, Escondido police joined efforts with ICE in an exclusive agreement known as “Operation Joint Effort.” This close association helped Escondido police use ICE during DUI checkpoints to check for immigration status.

In the past three years, Escondido and tow companies with city contracts have pulled in $11 million in fees, citations and auctioned vehicles from checkpoints.

According to ICE, Escondido is the only city in the country to have a special agreement to notify ICE agents about illegal immigrant suspects. ICE agents have an office at the Escondido Police Department and are on standby during sobriety checkpoints.

The State of California’s Office of Traffic Safety (OTS) provides grants to fund DUI checkpoints throughout California. Escondido Police insist that checking a driver’s license at DUI checkpoints is mandatory in order to qualify for state grants. But an OTS spokesman said that they “do not penalize a grantee for not checking (a driver’s license).”

“It is a way for the police department to make it so hard for them to live here that they will move somewhere else,” he said.

No one from the Escondido mayor’s office, nor from police headquarters, responded to a request for an additional interview or comment on this story.

One of the conditions of the OTS grant program, which awards $350,000 per year to Escondido, is that profits cannot be generated from checkpoints. Also, by law the state of California does not allow police agencies to make a profit from towing cars; only to recoup expenses.

Yet an extensive review of city and police documents reveals that Escondido has been profiting immensely from both state-funded DUI checkpoints and towing of cars.

There’s a reason that tow companies are willing to pay so much to be included. During the past eight years of state-funded DUI checkpoints, they made millions of dollars.

On average, 5,000 vehicles were towed each year from 2004 to 2011. Unlicensed drivers in Escondido were being caught by the thousands and each one represented an impound fee, a tow hitch fee, and a 30-day impound storage fee totaling about $2,000 per vehicle.

In 2007, according to Escondido Police documents, the department considered starting their own city-run tow yard so that they could keep most of the revenue. Escondido abandoned the venture, but it was clear that the city was interested in increasing profits from state-funded checkpoints and the towing of cars – profits that are illegal.

A 2011 city report lists as towing expenses items such as bulletproof vests, weapons and wear and tear on police radios, cell phones and vehicles. These line items represent at least 60 percent of expenses for the towing program.

To justify raising tow-contract fees, the Escondido Police Department has also reported that the amount of labor involved in a tow has substantially increased. According to 2004 and 2007 tow-program reports, the department said it would take a total of 33 minutes of labor to tow a vehicle, including paperwork. But by 2011, the police department claimed it took 187.5 minutes.

“There is no need to bill for so much time to tow a vehicle,” said Ramirez. “Either Escondido is looking to pad their books, or they don’t know how to tow a car. If it took my officers that long to tow a vehicle, they would be fired.”

Yet, the state grant for DUI checkpoints is all-inclusive, intended to cover officer labor time and equipment. It would appear therefore that Escondido is making an illegal profit off of every checkpoint tow.

This past year, Escondido reduced its impound fees from $180 to $100 for cars that were towed from OTS checkpoints. Repeated requests were made for documents justifying the reduction in fees. But Escondido officials say the documents do not exist.

Research support for this story was provided by The Investigative Fund of The Nation Institute.