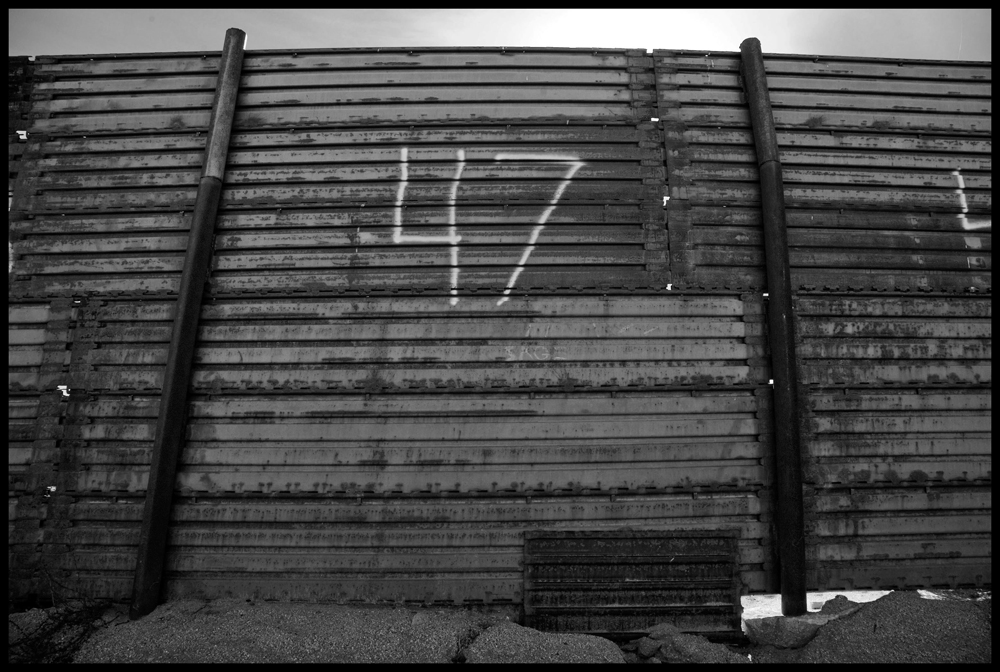 DAVID BACON
The border wall in the mountains west of Mexicali.

In 2007, the Bush administration set out to double the size of the U.S. Border Patrol. It was a tall order and called for some creativity, with the Border Patrol even sponsoring its own racing vehicle at NASCAR events as a recruitment tool. Because recruits were hard to find, Border Patrol — part of the Department of Homeland Security — also lowered its standards and training regimens were relaxed. Individuals without a high school diploma could already join the force, but background checks were also deferred. For the vast majority of applicants, lie detector tests, which were previously common practice, were similarly omitted.

In less than two years, 8,000 new agents were hired. The Border Patrol force was 11,000 strong in 2007 and now numbers more than 21,000 agents. So by my calculations, nearly half of the Border Patrol force today consists of people with just a couple of years of experience or less. This rookie force is armed with batons, pepper spray, Tasers, rifles and handguns. At their disposal is an array of technology, from ground and night sensors to unmanned drones and Black Hawk helicopters. And because border officials are part of the Department of Homeland Security, they are not subject to the same public scrutiny as police officers.

By policy, border officials do not make their use-of-force protocol public. When they can fire a weapon and why is kept secret. With insufficient training and little public oversight, perhaps it's no surprise that since May 2010, there have been at least eight documented cases of extreme use of force against unarmed and non-combative migrants resulting in death. Families and advocates of the victims seeking answers have been met with silence. The cases, some more than 2 years old, remain under investigation and therefore the Justice Department is not forthcoming with details.

The story of Anastacio Hernandez Rojas, 42, an undocumented immigrant who came to the United States at the age of 16, is just one example of a law enforcement agency using deadly force without repercussion. I learned of his case while researching and reporting a television segment about the Border Patrol and its use of excessive force.

Hernandez lived and worked in San Diego for more than 25 years, raising his five U.S.-born children. In May 2010, in the process of being deported for being undocumented, Hernandez was severely beaten and shocked with a Taser and killed. The segment features new video from witnesses who watched as Hernandez, handcuffed and lying on the ground, was surrounded by about 20 border officials.

One witness on the Mexico side of the border said the agents were hitting Hernandez with their batons over and over again while other agents punched and kicked him. A Border Patrol supervisor arrived on the scene, but instead of intervening, he permitted the agents to continue. Another official yelled at the officers to clear away from Hernandez's body before shooting Hernandez with his Taser. Before he fired, the agent yelled “Quit resisting!” despite the fact that Hernandez lay handcuffed on the ground.

The command was likely intended for the ears of the gathering crowd of witnesses. In the video, you can hear Hernandez cry, “Ayudame, por favor, ayudame” (Help me, please, help me). People began to shout at the officers, asking them to stop. At one point, an officer tied Hernandez's ankles before the beating continued. All told, witnesses say, the attack lasted nearly 30 minutes.

The same witnesses told me Hernandez offered little or no resistance. One said she felt like she was watching someone being murdered — a conclusion later confirmed by the San Diego coroner's office, which classified the death as a homicide. As a result of the brutal beating, Hernandez suffered a heart attack. An autopsy also revealed several loose teeth; bruising to his chest, stomach, hips, knees, back, lips, head and eyelids; five broken ribs; and a damaged spine.

Carlos La Madrid, 19, a U.S. citizen, was shot three times in the back. According to the Border Patrol, La Madrid had bales of marijuana in his car and evaded pursuit by trying to jump over the border fence into Mexico. The Border Patrol shot him because he was throwing rocks — a difficult feat for someone climbing a fence.

Of the eight recent killings, none has proceeded to trial and no agents have been disciplined. The victims' families have sought answers and explanations from the U.S. government but have received no comments in return.

The violence against Hernandez and others, and the lack of any accountability in the wake of this violence, point to a disturbing trend. There are 21,000 Border Patrol agents who are trained to use deadly weapons. And without proper oversight and open investigations, the number of migrant killings and incidents of extreme and unwarranted violence continue to rise.

John Carlos Frey reported on the death of Anastacio Hernandez Rojas for PBS Need to Know in partnership with The Investigative Fund at The Nation Institute, now known as Type Investigations.

More from our series Abuse of Force at the Border