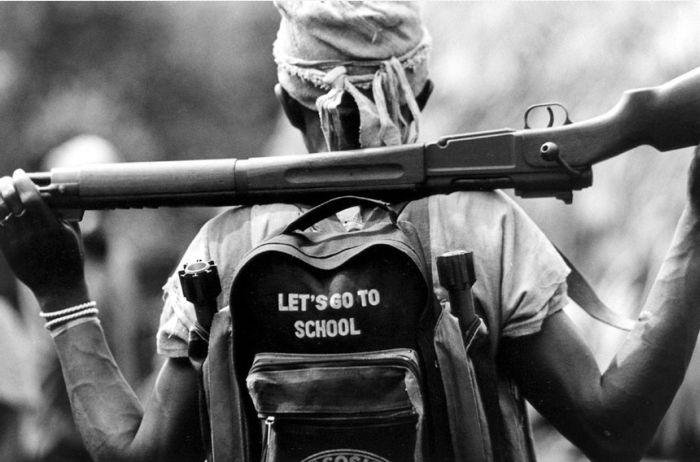 The border raids raise new fears that Liberian militias are back to using child soldiers, a practice thought to have ended with the cessation of the country's civil war in 2003. | Credit: COURTESY AMNESTY INTERNATIONAL

Issa Gnonkonte woke up early one Wednesday in April in this village near the Liberian border to find 15 men at his front door armed with machetes and Kalashnikov rifles.

Along with the 10 other people in the house, Gnonkonte, 32, was taken outside and stripped naked while the attackers began to loot.

Later, the attackers — a mix of Ivorians and Liberians believed to have crossed the border from Liberia — threatened Gnonkonte and his relatives.

“They said that they would kill everybody,” he recalled. “But at a certain point there was a dispute between the mercenaries. Some were asking to kill us all, and some were saying they would kidnap us and bring us all back to Liberia.”

In the end, the men crossed back over the border, leaving Gnonkonte’s family to sort through the remains of their house and possessions, which had been set aflame.

Not everyone in Sakre was spared, however. Local officials and residents reported that seven men were killed in the attack: five were shot to death, one was beheaded with a machete, and one was beaten to death with a rifle.

The attack was the fourth of its kind reported over 10 months in western Ivory Coast, which was a flashpoint of the post-election crisis that erupted in late 2010 after incumbent president Laurent Gbagbo refused to concede electoral defeat to his rival, Alassane Ouattara. (The violence killed at least 3,000 people, according to the UN. Gbagbo was detained in April 2011, allowing Ouattara to take office.)

On July 18, dozens of armed men raided camps near the village of Ponan, killing eight, according to Human Rights Watch. One man was found with his throat slit, while another had the barrel of a gun shoved in his mouth before being shot.

A similar attack in February killed six, including one woman, according to Ivorian media reports.

The recent attacks, which have claimed more than 40 lives and displaced thousands, highlight continued insecurity along the border of two countries that are widely hailed as post-conflict success stories. They could also compromise efforts by Ouattara to promote reconciliation in a region of Ivory Coast that largely opposed his election.

The attacks could also revive one of the ugliest features of Liberia’s 14-year civil conflict, which ended in 2003 and claimed 250,000 lives: A report released Wednesday by Human Rights Watch documents the recruitment of an untold number of child soldiers by militiamen operating in the border region.

A 17-year-old fighter interviewed by the rights group said he was part of a unit that included boys as young as 14. “I am a Liberian and I never fought the Liberian wars, but I am going to Ivory Coast to help my friends, whatever they want us to do for them,” he said.

Lingering political tensions in Ivory Coast are believed to be a key source of the instability: Witnesses to three of the attacks have said they recognized some of the perpetrators as Ivorian supporters of Gbagbo who fled to Liberia once Ouattara’s forces assumed control of the area in April 2011.

The Sakre attack came just days after Ouattara made his first visit to the west since taking office, during which he stressed the need for balanced justice and national reconciliation while decrying the area’s instability.

An official with the UN mission in Ivory Coast, who declined to be identified because he was not authorized to speak for the mission, said the timing was likely no accident.

“This Sakre event is trying to send a message,” the official said. “They have shown that security is not under the government’s control.”

Matt Wells, West Africa researcher for Human Rights Watch, said there was every reason to believe future attacks would be attempted.

“The long border and dense vegetation makes the region notoriously difficult to monitor, but Liberian security forces could do far more to proactively investigate areas from which these attacks have been launched,” he said.

Liberia watchers have long raised concerns about the country’s eastern region, which borders Ivory Coast and from which the recent attacks originated. The final report from the UN Panel of Experts on Liberia, submitted in November, said eastern Liberia “remains fertile ground for potential mercenary recruitment,” and noted “few mercenary commanders have been detained by the Liberian authorities.”

Given Liberia’s weak judicial system, there is no guarantee that cases will be aggressively pursued against the few mercenaries who are detained. Liberian authorities disclosed in April that Isaac Chegbo, a notorious mercenary leader suspected of orchestrating massacres in western Ivory Coast during the post-election violence, had been released on bail in February. The government attorney responsible for trying the case had not been informed of Chegbo’s release and did not know of his whereabouts.

Wells said the failure to prosecute Liberian mercenaries and Ivorian militiamen who crossed into Liberia had left the border area “rife with these same militants.” In addition to Chegbo, the new Human Rights Watch report highlights the release of one of his deputies, a fighter known as A. Vleyee, or “Bush Dog,” who former combatants have said helped organize the recent cross-border attacks. According to the report, UN officials in Liberia are concerned that Chegbo may have played a similar role.

Both Liberia and Ivory Coast are home to UN peacekeeping missions. A spokesperson for the Liberia mission said its main objective was ensuring peace and security in Liberia, but added that security was “primarily the responsibility of Liberian security agencies, who are more and more in the front line of response in terms of security.” The Ivory Coast mission, she said, is responsible for promoting security in that country.

Officials from the Ivory Coast mission did not respond to requests for comment. In a statement after the Sakre attack, a deputy spokesperson appealed to Ivorian authorities “to confront this problem within the context of human rights and impartiality.”

Liberian and Ivorian officials met in Abidjan, Ivory Coast, to discuss the attacks in early May. A joint statement issued afterward acknowledged that only “limited progress” had been made in securing the region so far, but said officials had proposed carrying out a large-scale joint security operation along the border. No timeline for the operation was given.

Meanwhile, Ivorians living in the region affected by the attacks say the violence has heightened tensions between Gbagbo and Ouattara supporters, prompting fears of reprisal killings against those suspected of being in league with — or even just sympathetic to — the attackers.

An internal UN email dated April 29, a few days after the Sakre attack, said 3,000 displaced people had fled to the nearby town of Tai and were seeking shelter at a park near the mayor’s house. The mayor, Tere Tehe, said the majority of those who fled belonged to ethnic groups that largely supported Gbagbo.

“The Gbagbo supporters expect that the Ouattara supporters will carry out reprisal attacks, so we expect the whole region will be in trouble,” Tehe said. “That is the agenda (the attackers) are trying to establish.”

In Sakre, one reprisal attack has already occurred. On the morning after the late-April raid, the son of a pro-Ouattara fighter who had been killed the night before shot Sylvie Djire, a niece of Issa Gnonkonte. Relatives of the shooter claim Djire, 24, had been taunting him, while Gnonkonte and other relatives deny that. In any case, she died from her injuries.

Gnonkonte said the incident only exacerbated a sense of lawlessness in the region.

“There’s no security,” he said. “Whenever the situation is calming down there is another attack.”

Robbie Corey-Boulet is an associate editor at World Politics Review, focusing primarily on news from sub-Saharan Africa as well as LGBT rights.