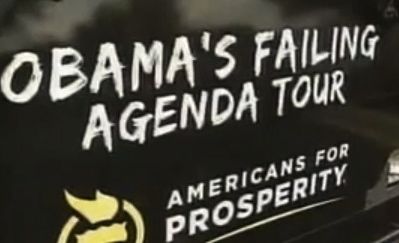 They’re gathering in new offices in swing states. Some of the locations have a tinge of irony for a supposedly grassroots organization: in Saddlebrooke, Arizona, they’ll be meeting in a country club; in Clearwater, Florida, the local AFP field director rented space from an outsourcing company called TAC Worldwide. In fact, the AFP network has a sophisticated targeting system, as well as an army of experienced Republican campaign hands to guide it. Volunteers even receive Samsung Galaxy tablets to log information quickly and move on to the next potential Romney voter.

It’s the beginning of an extremely well-planned get-out-the-vote effort that resembles what an entire national party would attempt. And it’s been four years in the making.

In 2009, the Koch network created a model called the Wisconsin Prosperity Network to move the state to the far right. After witnessing the Democrats’ stunning 2008 ground game, operatives in Wisconsin determined to out-organize liberals. They hired Tea Party organizers, invested heavily in front groups (like the MacIver Institute), ran constant advertising and coordinated with employers to hold propaganda meetings with workers. Tea Party bus tours in the state, fully financed by AFP, were designed to help elect Republicans.

And in the 2010 midterms, Wisconsin turned harder to the right than almost any other state in the nation. At least from the Koch perspective, the investments worked. The Koch theory of change was also reinforced by the savvy Scott Walker anti-recall campaign, in which Koch operatives bused seventy-five canvassers to the state to battle the unions.

The Kochs’ unique, outside-the-GOP voter mobilizing system is called Themis, named after the Greek goddess of divine order. Themis is a master database built with information purchased by the Koch brothers, as well as survey data gathered by paid organizers. Tim Phillips, a Koch political deputy, explained Themis this way to USA Today: “Our geo-targeting looks at everything from voting data to Census data to consumer-purchasing information.” Phillips also said, “We know their magazine subscriptions. In some cases, we know the websites they prefer to surf.”

The Kochs are financing more than 200 organizers and paid political staff in thirty-one states. It’s likely that much of the money the Kochs donate to the NRA and groups like the Faith and Freedom Coalition (run by Phillips’s longtime business partner, Ralph Reed) will also be spent on organizers on the ground. Using the Wisconsin model, the Kochs hope to partner with local conservative groups to build a rapid mobilization system that can compete on election day, in every critical state.

Too much attention is paid to television ads. The Koch network, which is training Tea Partiers via a partnership with True the Vote to harass and intimidate voters, may play a bigger role in this election. And you won’t see the Kochs’ work through FEC disclosures (they refuse to register their grassroots electioneering as independent expenditures). While Democratic groups like America Votes have their own sophisticated voter targeting operations, the Koch groups are better at flying under the radar. As in Wisconsin, liberals might see the ground shifting beneath them in November and wonder what happened.

Read this article in Spanish.