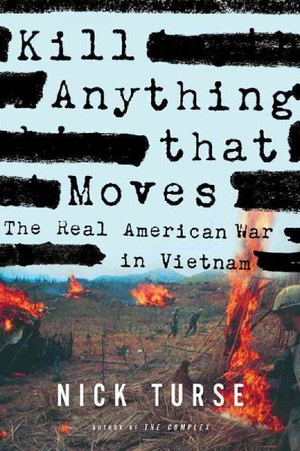 Kill Anything That Moves: The Real American War in Vietnam by Nick Turse, 2013

Americans have long been taught that events such as the notorious My Lai massacre were isolated incidents in the Vietnam War, carried out by “a few bad apples.” But as award-winning journalist and historian Nick Turse demonstrates in this groundbreaking investigation, violence against Vietnamese noncombatants was not at all exceptional during the conflict. Rather, it was pervasive and systematic, the predictable consequence of orders to “kill anything that moves.”

Drawing on more than a decade of research in secret Pentagon files and extensive interviews with American veterans and Vietnamese survivors, Turse reveals for the first time how official policies resulted in millions of innocent civilians killed and wounded. In shocking detail, he lays out the workings of a military machine that made crimes in almost every major American combat unit all but inevitable. Kill Anything That Moves takes us from archives filled with Washington’s long-suppressed war crime investigations to the rural Vietnamese hamlets that bore the brunt of the war; from boot camps where young American soldiers learned to hate all Vietnamese to bloodthirsty campaigns like Operation Speedy Express, in which a general obsessed with body counts led soldiers to commit what one participant called “a My Lai a month.”

Thousands of Vietnam books later, Kill Anything That Moves, devastating and definitive, finally brings us face-to-face with the truth of a war that haunts Americans to this day.

“A tour de force of reporting and research: the first time comprehensive portrait, written with dignity and skill, of what American forces actually were doing in Vietnam. The findings, hidden behind a screen of official lies and cover-ups all these years, are shocking almost beyond words.… Some thirty thousand books have been written about the Vietnam War. Many more will now be needed, and they must begin with Kill Anything That Moves.”
—Jonathan Schell, author of The Real War: The Classic Reporting on the Vietnam War

“This deeply disturbing book provides the fullest documentation yet of the brutality and ugliness that marked America’s war in Vietnam. No doubt some will charge Nick Turse with exaggeration or overstatement. Yet the evidence he has assembled is irrefutable. With the publication of Kill Anything That Moves, the claim that My Lai was a one-off event becomes utterly unsustainable.”
—Andrew J. Bacevich, author of Washington Rules: America‘s Path To Permanent War

“This book is an overdue and powerfully detailed account of widespread war crimes — homicide and torture and mutilation and rape — committed by American soldiers over the course of our military engagement in Vietnam. Nick Turse’s research and reportage is based in part on the U.S. military’s own records, reports, and transcripts, many of them long hidden from public scrutiny. Kill Anything That Moves is not only a compendium of pervasive and illegal and sickening savagery toward Vietnamese civilians, but it is also a record of repetitive deceit and cover-ups on the part of high ranking officers and officials. In the end, I hope, Turse’s book will become a hard-to-avoid, hard-to-dismiss corrective to the very common belief that war crimes and tolerance for war crimes were mere anomalies during our country’s military involvement in Vietnam.”
—Tim O’Brien, author of The Things They Carried

“American patriots will appreciate Nick Turse’s meticulously documented book, which for the first time reveals the real war in Vietnam and explains why it has taken so long to learn the whole truth.”
—James Bradley, coauthor of Flags of Our Fathers

“Nick Turse reminds us again, in this painful and important book, why war should always be a last resort, and especially wars that have little to do with American national security. We failed, as Turse makes clear, to deal after the Vietnam War with the murders that took place, and today — four decades later — the lessons have yet to be learned. We still prefer kicking down doors to talking.”
—Seymour Hersh, staff writer, the New Yorker

“No book I have read in decades has so shaken me, as an American. Turse lays open the ground-level reality of a war that was far more atrocious than Americans at home have ever been allowed to know. He exposes official policies that encouraged ordinary American soldiers and airmen to inflict almost unimaginable horror and suffering on ordinary Vietnamese, followed by official cover-ups as tenacious as Turse’s own decade of investigative effort against them. Kill Anything That Moves is obligatory reading for Americans, because its implications for the likely scale of atrocities and civilian casualties inflicted and covered up in our latest wars are inescapable and staggering.”
—Daniel Ellsberg, author of Secrets: A Memoir of Vietnam and the Pentagon Papers

“Meticulously researched, Kill Anything That Moves is the most comprehensive account to date of the war crimes committed by U.S. forces in Vietnam and the efforts made at the highest levels of the military to cover them up. It’s an important piece of history.”
—Frances FitzGerald, author of Fire in the Lake: The Vietnamese and the Americans in Vietnam