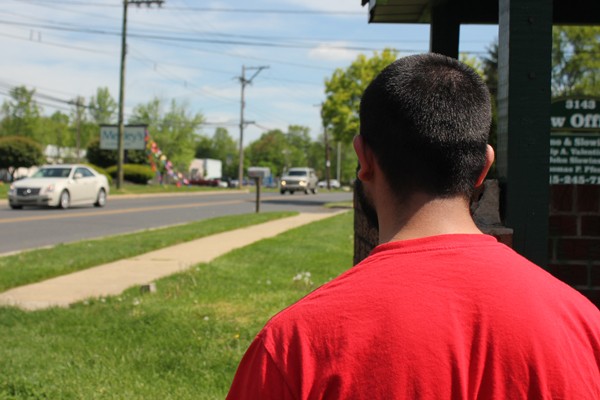 EDWARD BARRENECHEA/WHYY
This driver, who asked that his name not be used as he fights to stay in the United States, was arrested after a traffic stop in Bensalem last fall. A police officer and an immigration officer were riding in the same...

On a morning last June, Benjamin married his longtime girlfriend. She wore a white dress in a simple ceremony before a justice of the peace in Norristown, Pennsylvania. Their three kids, all American citizens like his wife, were their audience.

Later that same day, their eldest daughter, still a toddler, was with Benjamin in his car as he rolled up to a traffic checkpoint in Norristown.

Benjamin can't get a driver's license because he arrived in the country illegally eleven years ago. A state trooper marked an “X” on his windshield and directed him to a parking lot where Norristown police were writing tickets.

After the Norristown officer finished with Benjamin, he told him to go speak with officers from U.S. Immigration and Customs Enforcement who were waiting nearby. Benjamin says the officer's tone was threatening, telling him he'd be sent back to Mexico. His daughter started to cry.

Listen to the report.

According to citation records obtained by a public records request, 60 percent of the nearly 100 drivers ticketed by the Norristown Police Department during two checkpoints conducted jointly with ICE last summer had Hispanic surnames. These figures are particularly striking given that Hispanic residents make up only 30 percent of Norristown's population, according to the 2010 Census.

Recently retired Norristown Police Chief Russell Bono, who oversaw the department during the traffic stops, says that immigration officers approached all ticketed drivers in their cars, regardless of national origin.

He says he had a general ban in place on asking about immigration status and that his officers took no part in the immigration enforcement. They simply enforced traffic laws, he says.

“We were not involved in that at all,” he insists. “That was strictly ICE agents.”

But drivers who went through the two checkpoints ICE attended in Norristown last summer had different recollections.

Benjamin, one of a dozen motorists contacted by WHYY, said ICE agents approached vehicles selectively and Norristown police officers determined who would go on to speak with immigration. Even ICE's own records indicate that Norristown police told immigration officers who arrested a passenger in one vehicle that he was a Mexican national. ICE decided this man was a priority case because of his tattoos, which suggested he belonged to a street gang. The man told them he is not in a gang is fighting deportation. An ICE official said that it was Norristown police officers who noticed the subject's tattoos and indicated that they “may have been gang-related.”

Bono maintains that the federal agency made its own decisions about whom to take and whom to let go.

“I could tell you there were probably 50 or more people who walked away who I know for a fact were not legal residents,” the chief said.

Bono also told WHYY that ICE officers promised him they would not speak with passengers, but only with cited drivers.

“I did not want the checkpoints to be a pretense stop for immigration checks,” he said. “They're safety compliance checkpoints, but if another agency a federal agency, ICE or anyone else, asks to participate in it and they didn't make it a pretense stop, then I didn't see anything wrong with that.”

An ICE official said that ICE participated in the checkpoints at the invitation of Norristown police.

When WHYY requested more records on the checkpoints from the Pennsylvania State Police, who provided additional manpower for the checkpoints at the borough's request, state officials responded that the records were off limits because they relate to an investigation. WHYY submitted a Freedom of Information Act request to ICE in February requesting its records on the two checkpoints. To date, the agency has not delivered them.

The lucky and the unlucky

Benjamin was one of the lucky ones.

An ICE officer fingerprinted him, twice, and asked questions about his personal history. Eventually, another immigration agent said Benjamin and his daughter could go.

Another driver from Brazil, who asked that his name not be used because he's currently fighting deportation in immigration court, was not so fortunate. He describes being held in the police garage, where ICE agents were fingerprinting, with a group of Hispanic men, including one man who'd been taken out of a truck used by his employer, a landscaping business.

“[His] wife went to get her three girls ... six, eight, ten years old, to bring to him just to say bye and because, she says, they just want to give him a hug. [ICE officers] say, 'You have nothing to do here.' He was in chains. He start[ed] to cry. It was so sad,” recalls the Brazilian driver.

The men spent the night in the Montgomery County jail.

“All night I was thinking thousands of things in the jail. I come to achieve my goals ... [When] I wake up I hoped it was a nightmare.”

The Brazilian motorist says he has no criminal record and had never been deported.

ICE points to cases such as that of Benjamin, the man who was let go, to show they exercised “prosecutorial discretion” in the field, a policy announced in 2011. A way of prioritizing its resources, prosecutorial discretion allows ICE to focus on threats to public safety and individuals that repeatedly violated immigration law.

Thomas Decker, the head of ICE's regional enforcement and removal operations, said that during operations such as those in Norristown, immigration officials exercise independent judgment in each case.

“Once we determine alienage, then is it somebody that falls into a priority. And if they fall into a priority then we can take enforcement action,” Decker said.

However, the very nature of the traffic checkpoints leads to immigration officers encountering and detaining people they wouldn't otherwise prioritize for public safety reasons.

A Bensalem resident, who also requested his name not be used while he is still in immigration court, was pulled over immediately after turning out of his apartment building's parking lot.

As a teen, he'd crossed the Arizona desert to find work in the U.S. and now works in landscaping. He doesn't have a driver's license.

The Bensalem police officer wrote him a ticket for driving without a license. The driver says he asked whether he could leave and was told to wait. Another officer who had been sitting in the same patrol car came up and knocked on the window. He was an ICE officer doing a “ride-along.”

“They just come and take you,” said the Bensalem man. “They don't tell you anything. There are a lot of people who are here illegally ... but what I simply don't know is, why me?”

The ICE officer took him into custody for illegal entry.

“This is when you come to questions of racial profiling,” he notes, pointing out that his client had barely been on the road and was never told why he was stopped.

But Weisz also alleges that the ICE ride-alongs seem like an effort to get around federal and state laws. Immigration officers can't normally pull over anyone outside of border regions, and certainly not for a traffic violation. Police are normally prohibited from making immigration arrests.

“Well, then they bring along an immigration officer to ride along with them who then, all of a sudden, lo and behold, encounters someone who is undocumented,” Weisz observes.

Fred Harran, Bensalem's director of public safety, said that the utilization of both set of laws is the point of the collaboration between local and federal law enforcement.

“If you get people in the country illegally involved in negative activity, then it's a great tool to use,” he argues. “Why not use every tool that is at our disposal?”

There are a few reasons Harran could have hesitated. Congress created special programs that allow police to get involved in immigration enforcement efforts, if they are first trained on immigration protocols and how to avoid profiling. Bensalem applied for such a program but the federal government rejected the request, saying it did not expect the benefits to outweigh the workload and resources required.

Congress also recognized that concern about police enforcing immigration could deter immigrants from reporting crimes or cooperating with investigations when it created a special “U visa” for victims of crimes.

His clinic, which recently won a $650,000 settlement over similar joint activity targeting day laborers in Connecticut, says such collaborations could violate constitutional protections against unreasonable search and seizure.

“When the police are done with the car and they...direct that person essentially not to depart under their custody or control until an ICE agent comes over to interview them, then that, in my view, probably crosses the line into unlawful immigration enforcement,” says Wishnie. They should hold the person no longer than it takes to do their own criminal enforcement — in this case, writing a ticket, he says.

An ICE official states that, “ICE was present during police questioning of subjects [in Norristown]. ICE is unaware of anyone being held by the police department for immigration purposes.”

ICE's regional office confirms its agents participated in ten traffic checkpoints in 2012 within its area of responsibility. That region covers Pennsylvania, West Virginia and Delaware.

While deportations have reached record highs under the Obama administration — a report by the Migration Policy Institute found total removals rising sharply, from 30,039 in 1990 to 188,467 in 2000 and then to 391,953 in 2011 — the Obama administration has denied setting quotas on deportations. However, documents obtained by the ACLU of North Carolina list police checkpoints among tools for meeting criminal alien removal targets.

Back in Norristown, a new interim police chief refused to admit any past wrongdoing, but says that ICE won't be back when his officers do checkpoints this summer. He heard Latino residents' complaints, he said, and he doesn't need any more headaches.

This story was reported in partnership with the Investigative Fund at The Nation Institute with additional support from the Fund for Investigative Journalism.

Emma Jacobs is an independent, multimedia journalist based in Philadelphia.