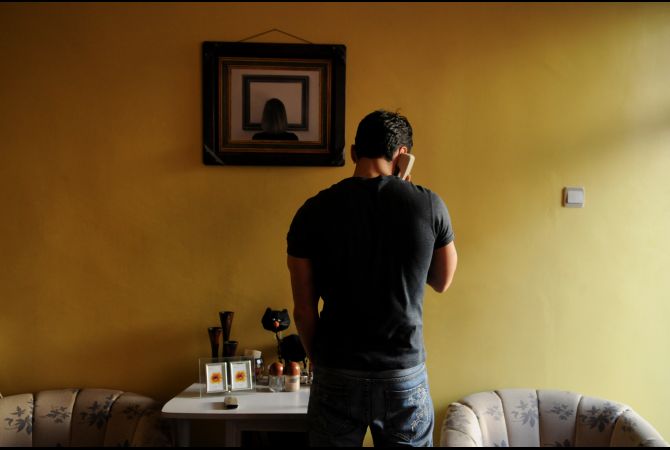 Babak, 31, arrived in Kayseri in December 2007. He said he knew he would be going to Los Angeles, pending his final interview and medical exam. He was caught having sex by his boyfriend's father, part of the Ira... | Credit: GLOBAL POST/KATE BROOKS

It’s a humid summer night in Kayseri. Several busloads of Iranians trundle through the dusk. Grandparents, toddlers, thirty-somethings and gangly teenage couples stand in the aisles, sit on laps. All are refugees.

The caravan stops in front a nondescript high-rise with a small disco on the ground floor. Tobacco water pipes coil in wait on the terrace as DJs set up inside.

Nasrin Sabokpa, a 26-year-old lesbian, is here with her mom and two gay friends. Sabokpa and her friends are several of the hundreds of lesbian, gay, bisexual and transgender (LGBT) refugees that have left Iran with help from an “underground railroad” spanning from Iran to Turkey and then across the globe, from Canada and the United States to Europe and Australia. For now, they’re registered with the United Nations High Commissioner for Refugees (UNHCR) inAnkara, and waiting. Waiting for the next move, the next life, a fresh start.

“The last four years in Iran were so hard. I always had to hide myself — from family, from friends, everywhere I went,” Sabokpa said. “I don’t want to hide my sexuality from others. I want everyone to know that I am gay, that I am normal, like others.”

Since arriving in Turkey, Sabokpa has received support from two groups working on behalf of Iranian LGBT refugees, including the Iranian Railroad for Queer Refugees (IRQR) and the Iranian Queer Organization. Both groups are based in Toronto. Founded in 2006, the IRQR is an informal network of travel routes and safe houses that aims to provide protection and information to LGBT citizens of Iran and to help them leave, if they decide to.

Most refugees learn about the two Canadian organizations through the internet or by word of mouth. Both aim to provide a lifeline to hundreds and eventually thousands of LGBT citizens in Iran who are facing discrimination or imminent danger from family, friends, colleagues or the government on the basis of their sexual orientation or identity.

The Iranian refugees in Kayseri live in a strange limbo during their time in Turkey. They don’t know how long it will be until they’re assigned a new country by the UNHCR, and they don’t know where they’ll go next. After an initial interview that grants them refugee status, they wait for a second interview. After the second they wait for a third. Finally, if all goes well, they’re assigned a new country and a date of departure. The average waiting time is eighteen months.

These months go by slowly: without the legal right to work, it’s often a time of financial stress and boredom. Many of the LGBT refugees in Kayseri sleep late into the afternoon and stay up most of the night, keeping in touch with friends back home over Skype or Facebook, missing home or hating home, worrying.

“Everyone here is mentally ill,” says one refugee in Kayseri. “You can’t endure what we’ve endured without getting sick.” He considers himself better now, but has been struggling on and off with depression since he was in Iran. “I was smoking a pack a day back home, now I have three cigarettes a day. Back home, I was taking fourteen pills a day and now I’m down to four.”

Sabokpa is an obvious connector, organizing activities with her mom and friends, checking on other refugees to see how they’re doing. Though she is friends with many fellow Iranian LGBT refugees, she says the community has its divisions. “Here no one tells their stories to others,” she says. “You never know who you can trust.”

One of Sabokpa’s friends pulls a bottle of vodka out of the plastic bag at his feet and pours a round for the table. He tops the cups off with a splash of apple juice and after a toast —salamati, in Persian — everyone downs their cups like shots. A half-hour and three rounds later, most of the bottle is gone.

Sabokpa’s mom skips the vodka and instead nurses a water bottle filled with red wine. She’s stylish and looks younger than her 47 years, with bright blue eyeliner around shining eyes. During her visits to Kayseri, she has become something of a den mother to Sabokpa’s friends, a surrogate to those who have lost contact or been cut off from family. At one point in the evening one of the friends breaks down, weeping because he misses his mother. Her mom goes to him and holds him.

Though Sabokpa never talked openly with her mother about being a lesbian, the two have always been close, an allied force against Sabokpa’s abusive father. During her parents’ divorce, when Sabokpa was sixteen, her father turned her into school officials, alleging that she wasn’t a virgin. After a medical exam determined otherwise, the case was dropped, she says.

Sabokpa is immediately friendly one afternoon in a downtown Kayseri park, a few days before the Iranian disco. The park is an oasis in the industrial city — shady and green, filled with paddle boats and gazebos. Children splash in a fountain in their underwear, vendors sell corn and cold cans of cherry juice.

She fields calls and text messages on her two phones. Her girlfriend, another Iranian refugee, is in Los Angeles, eleven and a half hours behind, and will soon be waking up. Another refugee friend calls to ask for advice about what kind of dog he should get.

Sabokpa had a dog for a couple months in Kayseri but had to give him away when she got too depressed to take care of him. She advises her friend to get a small dog: cheaper and easier to take when you leave, she says, whenever that is.

“I had family problems growing up,” she says. “People always asked why I had short hair and dressed like a boy. I realized I was a lesbian when I was 7 and had special feelings for classmate, but I was a child and didn’t know anything about it until I was 16 or 17. I read something about LGBTs on the internet and found out I was normal.”

Increasingly, Sabokpa faced pressure at school and within society. At one point, she was arrested for wearing a short dress with ripped jeans. Another time, a woman on her basketball team began to harass her. She says she thinks it’s harder for women to escape than men because of their already reduced independence within Iranian society.

Fortunately, she has emotional and financial support from her mom, who supported Sabokpa’s decision to leave Iran. She now says she plans to go to the United States.

Though same-sex acts are grounds for execution, gender reassignment in Iran is legal, and some reports have suggested that the accessibility and number of sex change surgeries in the country reflects pressure from the government — or in some cases, friends, family or doctors — for homosexuals to undergo surgery in order to become legal — that is, heterosexual.

Sabokpa is familiar with the phenomenon, she says, adding that some friends back home had suggested she get a sex change as a way out. “It would be easier to become male, but I love my body,” she says. “I want someone who loves me in this body.”

Back in Iran, she saw the underground railroad as a way out; a way to escape the discrimination and fear she faced on a daily basis.

Arsham Parsi, founder of the Iranian Railroad for Queer Refugees, is himself a refugee. In 2001 Parsi had become involved in underground efforts to advance LGBT rights in Iran, including organizing a Yahoo! chat group, Voice Celebration. Four years later, at the age of 24, he left after hearing from a fellow LGBT activist — who had recently been released from prison — that authorities were looking for “a gay activist named Arsham.” Parsi, fearing for his life, fled to Turkey.

Like many of the other LGBT refugees from Iran, Parsi felt only marginally safer in Turkey. He said one of the most horrific memories of his time there was being publicly beaten by a homophobic mob as he walked down the street with his friend Amir, another gay Iranian refugee who had been tortured and flogged back home. Parsi feared they would be beaten to death. Nobody tried to help, he says: not the police, none of the onlookers.

Episodes like this are what prompted Parsi to move to Canada in 2006 and start an organization to help people like himself.

The IRQR office is in a high-rise building in downtown Toronto, not far from the shores of Lake Ontario. The organization relies on volunteers, often other LGBT refugees, and private donations to fund its operations, which consist of logistical, financial and emotional support services in Iran, Turkey and throughout the Iranian Diaspora. Since 2006, IRQR has worked with 528 refugees. About six times a year, Parsi travels to Turkey to meet with refugees as well as contacts at the United Nations.

Parsi’s activism has made reluctant refugees out of his family too. This past summer, his parents and three sisters moved from Turkey, where they had been waiting for asylum, to Toronto. Two of his three sisters were kicked out of their schools in Iran, and one sister was beaten in the street. A government file was opened on Parsi’s family, citing “promoting immoral behavior and corruption; homosexuality.”

“My parents had to leave all of their belongings after fifty years of building their life. They left Iran within two weeks,” Parsi says, describing the events in 2010 that led to his family’s departure. He is grateful for his family’s support, particularly because he has seen so many in the LGBT community rejected by their families as well as by society at large. “They never, ever blamed me.”

Sabopka is looking forward to reaching the end of this long railroad, arriving somewhere she can feel safe and accepted as herself, in her body, perhaps with someone she loves. Those who have gone before her continue to grapple with new lives, navigating the ache of missing home with the freedom of living more openly.

Eleven months after the Iranian disco, Sabopka is still in Kayseri, waiting for her flight to the United States. She has received her refugee status. “All is done, finally,” she writes in an email. “I’m really tired of being here but at the same time, it’s hard to say goodbye to friends that meant everything to me.”

And Danial and Mohammad, an Iranian couple now making a new life together in Toronto after leaving Iran and passing through Turkey, might tell Sabopka that the end of the railroad is really just the beginning.

“I don’t feel like I belong in this society,” Danial says of Canada. “Everyone looks at me like I’m a stranger. But there’s one thing that makes it better: I have the right to live here.”

Mohammad adds, “I love Iran. If ever I find out that society and culture is at a stage when they can accept me as a human being and not interfere in my personal life, I wouldn’t stay away.”

Marie Doezema is a Paris correspondent for various international publications.