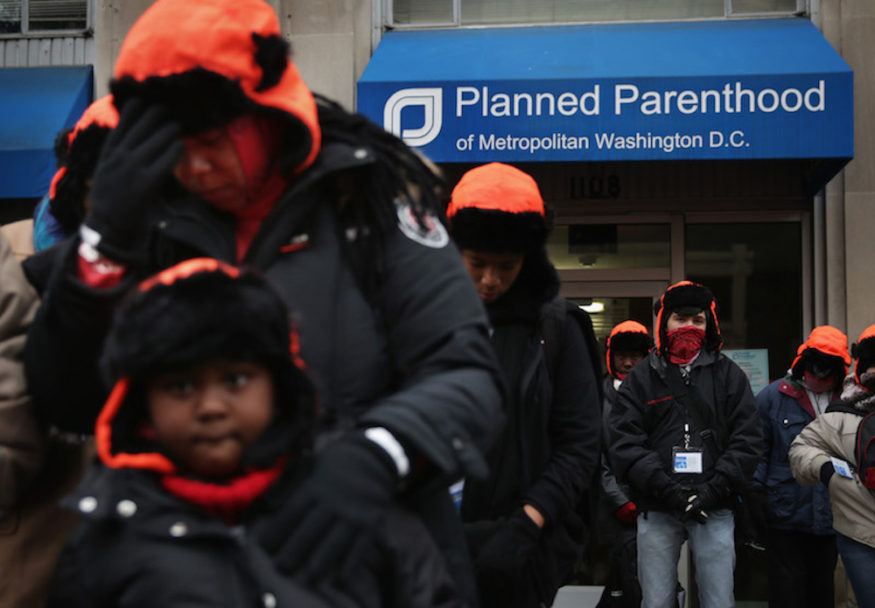 Reverend Clenard Childress Jr.: “Glory to God. What we do as a church — you edify one another. African American people of color have been targeted. ‘It is a woman’s right to choose.’ Well first of all, to the Christian, the Bible says you’ve been bought with a price and ye are not your own. It is not your body. God says, ‘It’s mine.’”

Alicia Culley Chambers: “I have 15 children. I have I have gotten abortions in the past. When the abortion was over, I felt that I had done something wrong and I felt that something was literally missing. I remember saying, ‘God, this is not right.’”

Childress: “Amen, our women are being lied to and victimized and you’re trying to get me to calm down. How do you calm down over genocide? And here I am a shepherd supposedly guarding the flock not warning them! I’m going to tell you right now, if you shed innocent blood, it will pollute the ground.

“My name is Reverend Clenard Childress Jr., I am a senior pastor of the New Calvary Baptist Church in Montclair and I’m assistant to the national director of L.E.A.R.N. — the Life, Education and Resource Network. This weekend is our annual youth retreat. I believe in mentoring and preparing the next generation of activists. We need more African Americans informed on the best kept secret in America, and that is the black genocide; the targeting of the abortion industry of African Americans.”

Cynthia Greenlee, Ph.D.: “I am a historian and I study African Americans and abortion. You can’t go a day without hearing a story about abortion being black genocide. At least if you’re me. I have a Google alert set up and I literally get an email every day. It’s a potent argument because the history of racism — and particularly medical racism — is real. And African Americans are very aware of that and we’re aware of the history of sterilization abuse that, you know, a lot of our public health officials and legislators often wanted to make sure that we didn’t reproduce.”

Childress: “Margaret Sanger, brilliant woman, brilliant strategist. She came up with the Negro Project, a plan to reduce the number of African Americans and target them for sterilization, abortion, and the essence of that is ‘the Negro is a problem.’”

Greenlee: “Margaret Sanger is the lightning rod. In the late 1920s, Sanger started what was called the Negro Project, which she started with the collaboration and support of a coalition of black leaders, to open some birth control clinics in African American communities, mostly in the South. People like W.E.B. Du Bois, Mary McLeod Bethune, Adam Clayton Powell and others. But Sanger was a racist in that she believed that black people were ignorant and unable to make choices without some intervention. So what eventually happened is that people in the present interpreted the Negro Project as a targeted program that wasn’t… something similar wasn’t being done in white communities, which was not true.”

Raegan McDonald-Mosley, M.D.: It’s really important that we don’t let these efforts that are spreading false narratives around Planned Parenthood decrease access, especially for black women who rely on Planned Parenthood for care.

McDonald-Mosley: Most of what we provide is related to comprehensive preventive medicine services. And for many people — especially many of the young people we see — we’re the only medical provider that they see in a given year. The anti- abortion movement — they’re fixated on this one issue in regards to shaming black women and controlling the bodies of black women, whereas there are all of these other healthcare inequities that they’re not paying attention to. They are not marching in the streets and protesting about the fact that we are almost 20 times as likely to acquire HIV or that maternal mortality is on the rise and 3.5 times higher among black women than it is among white women. Which leads me to believe that they don’t actually care about black women. They don’t care about their lives or their children. But they are fixated on trying to shame black women.

Yoruba Richen is an award-winning documentary filmmaker who has directed films in the U.S. and abroad.