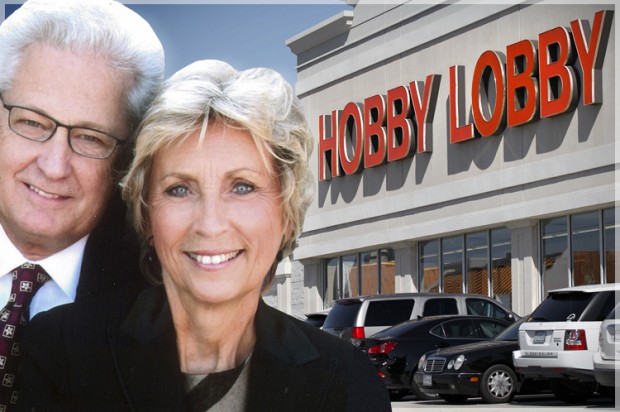 Hobby Lobby says it’s just trying to protect its religious freedom. The family-founded and -run company is closed on Sundays, has an employee manual that includes biblical references, and announces on its website its commitment to “Honoring the Lord in all we do by operating the company in a manner consistent with biblical principles.” The company got in hot water last year when an employee told a blogger that no Hanukkah decorations were stocked “[b]ecause Mr. Green is the owner of the company, he’s a Christian, and those are his values.”

But a document published here for the first time reveals Hobby Lobby appears to be going much further than protecting freedom, providing funding for a group that backs a political network of activist groups deeply engaged in pushing a Christian agenda into American law. The document shows entities related to the company to be two of the largest donors to the organization funding a right-wing Christian agenda, investing tens, if not hundreds, of millions of dollars into a vast network of organizations working in concert to advance an agenda that would allow businesses to discriminate against gays and lesbians and deny their employees contraceptives under a maximalist interpretation of the Free Exercise Clause of the United States Constitution.

That network of activist groups has succeeded in passing legislation in Arizona requiring women to undergo an ultrasound before an abortion, banning taxpayer-funded insurance paying for government employees’ abortions, defining marriage as a union between a man and woman, and funding abstinence education. And there’s evidence that its efforts go well beyond the borders of the Copper State.

Outside of the Supreme Court case, little has been reported about Hobby Lobby’s political ties. The company is owned privately by the Green family and generates more than $3 billion per year in revenue from its 602 stores. The family proudly promotes its philanthropy to churches, ministries and Christian community centers, dedicating half of the company’s pretax earnings to Christian ministries. In 2007, Hobby Lobby’s founder and CEO, billionaire David Green, pledged $70 million to Oral Roberts University, bailing out the debt-ridden evangelical university. In 2012, Forbes reported, “Hobby Lobby’s cash spigot currently makes [Green] the largest individual donor to evangelical causes in America.”

But until now, its political connections have been obscure.

Hobby Lobby-related entities are some of the biggest sources of funding to the National Christian Charitable Foundation, which backed groups that collaborated in promoting the anti-gay legislation in Arizona — recently vetoed by Gov. Jan Brewer — that critics say would have legalized discrimination against gays and lesbians by businesses.

The path of SB 1062 to the Arizona statehouse was built by two groups, the Center for Arizona Policy and the Alliance Defending Freedom. Center for Arizona Policy employees regularly spoke in favor of the legislation, appearing as the grass-roots face of a bill that the center’s president, Cathi Herrod, characterized as “[making] certain that governmental laws cannot force people to violate their faith unless it has a compelling governmental interest–a balancing of interests that has been in federal law since 1993,” according to a statement on the group’s website. (One hundred and twenty-three Center for Arizona Policy-supported measures have been signed into law; its legislative agenda ranges from requiring intrusive ultrasounds for women seeking abortions to HB 2281, a bill that, if passed by the Arizona Senate, would exempt religious institutions from paying property taxes on leased or rented property.)

For its part, the Alliance Defending Freedom, a national Christian organization based in Arizona, works toward the “spread of the Gospel by transforming the legal system and advocating for religious liberty, the sanctity of life, and marriage and family,” according to the group’s website. Both groups are heavily funded by the National Christian Charitable Foundation, “the largest Christian grant-making foundation in the world,” as described on the group’s website. And who is the largest funder of National Christian Charitable? That would be a Hobby Lobby executive.

Here’s how it works: At the end of the 2012 tax year, the National Christian Charitable Foundation had more than $1.22 billion in assets under management in donor-advised funds that offer “innovative, tax-smart solutions [to] help you simplify your giving, multiply your impact, and glorify God.” Outgoing grants – totaling $4.3 billion since 1982, according to the Foundation — go to a range of causes including climate science denial, charter schools, free market and pro-life advocacy. But buried in their voluminous tax filings (at times totaling more than 600 pages) are a number of sizable grants to the Center for Arizona Policy and the Alliance Defending Freedom, issued between 2002 and 2011, the last year that complete tax data is available for all three organizations.

Typically the trail would stop there. The National Christian Charitable Foundation appears to be one of the biggest, if not the biggest, single contributor to the Alliance Defending Freedom and the Center for Arizona Policy, but because the foundation is a massive-donor advised fund, its donors are shielded from public scrutiny.

The form, viewable here, shows a total of nearly $65 million in contributions coming from a combination of Jon Cargill, who is the CFO of Hobby Lobby, and “Craft Etc.,” an apparent misspelling of Crafts Etc., a Hobby Lobby affiliate company. The document shows that Hobby Lobby‑related contributions were the single largest source of tax-deductible donations to National Christian Charitable’s approximately $383.785 million in 2009 grant revenue.

According to addresses on the filing, both the contributions from Crafts Etc. and Jon Cargill came from a massive warehouse and office facility housing Hobby Lobby’s headquarters in Oklahoma City.

National Christian Charitable declined to comment on the foundation’s relationship with Hobby Lobby. Hobby Lobby did not respond to multiple requests for comment.

While the scope of the Hobby Lobby investment in National Christian Charitable has not been known until now, the Green family has been open about its fondness for the foundation. “National Christian [Charitable] Foundation provides a great solution for our family, as well as our business, to do our giving. We highly recommend them,” says a “review” of the fund by Hobby Lobby founder David Green on the foundation’s website.

In January 2013, Hobby Lobby issued a press release announcing its gift of a former prep school campus in Northfield, Mass., to the fund. The fund reports it is “giving away” the campus and is accepting applicants. (“Large Christian ministries, schools, seminaries and think tanks will most likely be the best potential recipients,” says an NCF website.)

The exact use of Jon Cargill’s and Crafts, Etc.’s contributions to the foundation aren’t clear, but National Christian Charitable’s outgoing grants reveal a series of disbursements to groups that have offered legal services to Hobby Lobby or signed on to amicus briefs supporting the lawsuit. In 2012, the NCF contributed $94,340 to the Becket Fund for Religious Liberty, the D.C.-based legal group representing Hobby Lobby in the upcoming Supreme Court case. Between 2002 and 2012, National Christian Charitable also contributed to at least 40 of the groups that signed on to amicus briefs supporting Hobby Lobby’s case.

Seen in this light, the ideological connection between the Hobby Lobby suit and Arizona’s recently vetoed legislation becomes clearer: One seeks to allow companies the right to deny contraceptive coverage while the other would permit businesses to deny services to LGBT people. “There are really close legal connections between [Arizona’s anti-gay SB 1062 bill] and the [Hobby Lobby] Supreme Court case,” Emily Martin, vice president and general counsel at the National Women’s Law Center, told Salon. “Ideologically, the thing that unites the two efforts is an attempt to use religious exercise as a sword to impose religious belief on others, even if it harms others, which would be a radical expansion of free exercise law,” said Martin.

And the common thread is the much bigger trend across the country. “Individuals and entities with religious objections to certain laws that protect others are seeking to use their religion to trump others,” Brigitte Amiri, senior staff attorney at the American Civil Liberties Union’s Reproductive Freedom Project, told Salon.

(Both the ACLU and the National Women’s Law Center participated in amicus briefs opposing Hobby Lobby.)

The centrality of Hobby Lobby in the network advancing this agenda is unmistakable.

The crafts store’s name and owners are rallying cries for the Alliance Defending Freedom, the Center for Arizona Policy and the Becket Fund, the key actors in the battle over Arizona’s SB 1062 and the upcoming Supreme Court case. The Center for Arizona Policy held Hobby Lobby up as an example of a company that would benefit from SB 1062 and praised the Green family’s decision to sue the federal government over the contraceptive mandate.

Center for Arizona Policy president Cathi Herrod heralded the Hobby Lobby lawsuit as a rare example of a “business willing to step out in faith and literally risk it all to hold fast to their faith” and encouraged people to shop at Hobby Lobby to show their support on “Stand With Hobby Lobby Day,” Jan. 5, 2013. And, in a January 2014, “action alert,” the center urged readers to support SB 1062 because it would “Clarify that people do not surrender their religious freedom rights just because they go to work or run a business. This provision would help protect businesses like Hobby Lobby that wish to operate according to their faith.”

“…[T]he Greens strive to apply the Christian teachings on respect and fairness to their employees. […] The Hobby Lobby success story is a true example of the American dream. Now the Greens want to live another American dream: that every American, including business owners like the Greens, should be free to live and do business according to their beliefs,” says the website.

The Becket Fund did not respond to requests for comment.

The Alliance Defending Freedom has also been outspoken in its support of Hobby Lobby, even staging a “Nine Weeks of Prayer” campaign in the weeks leading up to the Supreme Court hearing arguments in the Hobby Lobby suit. “You, your family, and your church” are urged to “Pray for the Christian family who founded and own Hobby Lobby, Inc.” and “Pray God would bless and protect the Green family as they continue to lead their company with integrity.”

Even if Hobby Lobby loses its suit against the U.S. government, groups funded through the National Christian Charitable Foundation will continue to test the limits of the legal system’s interpretation of religious freedom. The Alliance Defending Freedom itself is the organization behind McCullen v. Coakley, a case its lawyers argued in front of the Supreme Court in January challenging the constitutionality of a Massachusetts law that creates a buffer zone around abortion clinics; the Alliance Defending Freedom lawyers argue that the law creates a “censorship zone” for antiabortion protesters.

Similar legislation to SB 1062 also appeared in at least 13 other states – South Dakota, Kansas, Idaho, Tennessee, Colorado, Maine, Mississippi, Ohio, Georgia, Hawaii, Oklahoma, Nevada and Utah. Though those efforts have died or appear unlikely to pass following the setback in Arizona, the range of states is a good indication of the national ambitions that the alliance has for its legislation.

While the network of organizations funded by a foundation heavily backed by Hobby Lobby’s executive and affiliate company are vocal about their support of the Green family and other companies seeking an expansive interpretation of the free exercise of religion, others are less enamored with the agenda promoted in Arizona and in the upcoming court cases.

Amiri told Salon, “These companies are trying to use their religion as a license to discriminate against others.”

Eli Clifton is a reporting fellow with The Investigative Fund at the Nation Institute.