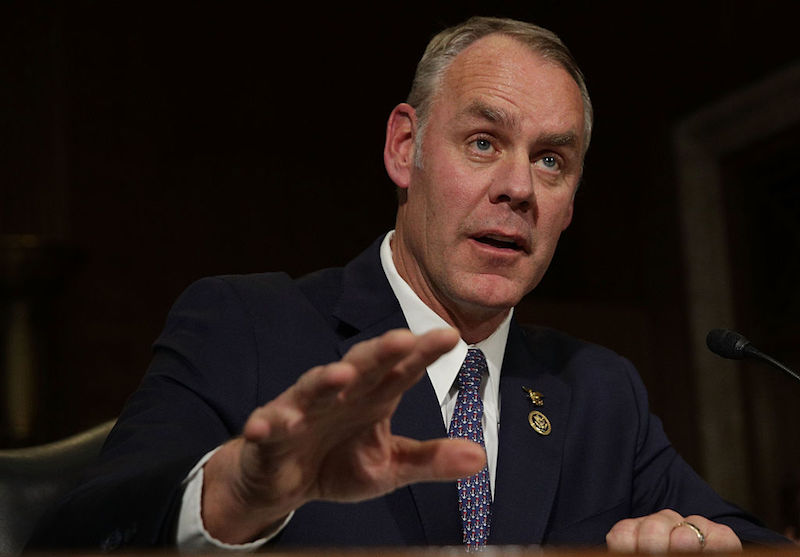 Murray Hitzman could have had a long and distinguished career at the US Geological Survey. In September 2016, when he joined the USGS as head of its energy and minerals program, his name was being floated as a possible future director of the agency. But just 15 months later, he resigned in protest over what he saw as an effort by the Trump administration to undermine key USGS policies governing the disclosure of data from a study of oil and gas deposits in Alaska.

In his resignation letter, obtained by Mother Jones, Hitzman said he was leaving the USGS because the agency had agreed to provide Interior Secretary Ryan Zinke with data from the Alaska energy assessment “several days in advance of the information’s public release, in contradiction of my interpretation of USGS fundamental science policy.”

It’s unclear why officials at the Interior Department, which houses the USGS, wanted to see the study in advance or if they ever actually viewed it before it was published. There’s no evidence that Zinke or anyone else sought to alter the findings or use the information for improper purposes. But critics say the administration’s actions fly in the face of decades of established practice and contradict written ethical guidelines—guidelines that are designed to ensure the integrity of the agency’s scientific research and prevent it from being exploited by anyone seeking an unfair economic advantage.

A second USGS scientist, Larry Meinert, who was deputy associate director of the energy and minerals program, told Mother Jones that he, too, recently left the agency in part because of what he viewed as pressure on scientists to violate the guidelines. “That is part of the reason why I too have now left the USGS and the public service that I was proud to perform,” Meinert said in an email.

In response to detailed questions about the request for unpublished data, the Interior Department said that its political leadership has the “legal authority to see any scientific data produced by the department.” Numerous current and former Interior officials, however, say the department’s position raises serious ethical issues—particularly when it comes to energy and mineral assessments, which contain valuable economic data that have the potential to move markets. According to a set of USGS guidelines known as the Fundamental Science Practices, sensitive results from these studies are “not disclosed or shared in advance of public release” because such disclosure “could result in unfair advantage or the perception of unfair advantage.”

Current and former Interior employees say this provision has long been interpreted to mean that the department’s political appointees—along with members of Congress and other federal and state officials—are prohibited from viewing the data before it is made available to the public. Marcia McNutt, who ran the USGS from 2009 to 2013, says the USGS strictly followed these guidelines during the Obama administration. Even the Interior secretary was barred from reviewing such data before it was officially released, according to McNutt.

In an email, McNutt noted that the agency did sometimes receive requests that ran counter to its policies, but she added, “It was up to me as a scientist, a political appointee, and the USGS director to explain to the DOI officials exactly what the FSPs were for that particular procedure, why they are prescribed the way they are, and the reasons why it would be a very bad idea for the USGS to do something different.”

Hitzman, who came to USGS from academia, is a highly respected economic geologist who had previously served as legislative aide to Sen. Joseph Lieberman (Conn.) and as a policy adviser in the Clinton White House. He’s done geological work for Chevron, Anaconda, and Phillips Petroleum and has taught for nearly 20 years at the Colorado School of Mines. In an email, Brian Hoal, executive director of the Society of Economic Geologists, said Hitzman is “a leading light in the field…and one of a fairly rare breed to enjoy success in both industry and academia.” McNutt described him as a “scientist of the very highest integrity.”

The events that led to Hitzman’s resignation capped a year of controversy in the Interior Department. In July, the department tried to shut down a visit by Mark Zuckerberg to Glacier National Park, where he was scheduled to meet with a top USGS ecologist studying the impact of climate change on the park’s melting glaciers. The tour went ahead—but not before the scientist and park superintendent were ordered not to participate. Later that month, Joel Clement, a climate scientist and policy adviser, filed a whistleblower complaint alleging that his reassignment to an accounting office was politically motivated. Clement has since resigned.

But to some degree, the scientists working with Hitzman in the USGS energy and minerals program had been insulated from the kind of scrutiny faced by experts elsewhere in the Interior Department. After all, their job—much of which involves mapping the country’s oil, gas, and mineral reserves—is central to the Trump administration’s agenda of expanding domestic energy development. Alaska’s National Petroleum Reserve was an obvious place to start; the 23 million-acre chunk of land on the state’s North Slope is owned by the federal government and is believed to contain large oil and gas deposits.

During the Obama administration, ecologically sensitive portions of the reserve were placed off limits to energy development. But the Trump administration is expected to remove those restrictions, and in May, Zinke ordered a new assessment of the reserve’s coastal plain. “The only path for energy dominance is a path through the great state of Alaska,” Zinke said at an event in Anchorage.

By late 2017, political appointees within the Interior Department, including deputy secretary David Bernhardt, were insisting that if Zinke asked to see the prepublication data from the Alaska study, the USGS would have to provide it, according to several sources with close knowledge of the situation.

At a tense meeting on Friday, December 15, Bernhardt argued that the USGS guidelines didn’t actually prohibit such a disclosure and insisted that the secretary could see the data whenever he wanted, according to a source with knowledge of the incident. Bernhardt, a former energy industry lobbyist and George W. Bush administration official, added that the USGS could ask Zinke to sign a non-disclosure agreement if necessary, this source said.

After the Friday meeting, the USGS did receive a request for the data from the Interior Department, Hitzman said. According to an email obtained by Mother Jones, Hitzman’s superiors at the USGS were prepared to turn over the data the following Monday, four days before the report’s release. The email raises the possibility of using a “3-4 page Powerpoint” with a disclaimer on the pages indicating that the information is “sensitive, pre-release, not to be shared, etc.” Troubled by what had happened, Hitzman submitted his resignation letter on Sunday, December 17.

“Scientific integrity is the bedrock of the Survey and must be preserved for the Bureau to properly serve the Nation,” Hitzman wrote in his resignation letter. “Though I understand my resignation will not change the data release, I feel that as head of the Energy and Minerals Mission Area I must register my protest of this action.”

The following day, when the USGS offered to turn over the data, Interior officials said they did not actually want the information and claimed they had never requested it, according to four sources who were told about the incident. “At that point, I’m sure they’d had a ‘come to Jesus’ meeting over at DOI,” Meinert said. It’s unclear if Interior officials ended up reviewing the information before the report was publicly released.

A spokeswoman for the Interior Department disputed this account of what happened but would not provide further details. She did provide a statement from acting USGS director Bill Werkheiser, who defended the department’s actions. Werkheiser said that he did not “believe that current or proposed practices for the notification of DOI leadership constitutes a loss of scientific integrity” and said that the Fundamental Science Practices “provide some flexibility in the timing of notification to DOI.” Workheiser added that department leadership made no attempt to alter the findings of the assessment.

The department also told Mother Jones that the legal authority for Zinke and Bernhardt to access the data comes from a 1950 law granting the secretary “all functions of all other officers of the Department.” But critics say that argument misses the point.

“The problem…with asserting that authority—even if it legally exists—is that the purpose of those internal USGS policies is to preserve the reputation of the USGS as a purveyor of objective science,” Elizabeth Klein, who served as associate deputy secretary at Interior during the Obama administration, said in an email. “Once you start injecting political officials into the process of developing scientific assessments, you raise serious questions about the objectivity of the science.”

Within the USGS, the rules are viewed as ironclad. In the past, when political appointees had asked for sensitive data, the agency was able to persuade them that such requests were improper. “We did take [the guidelines] very seriously,” said Brenda Pierce, the program coordinator for the agency’s energy resources program from 2003 to 2014. “Lots and lots of people asked for results ahead of time. But we categorically denied that to anybody. To protect us and to protect them.”

“These assessments have the potential to move markets in a big way,” added Kate Kelly, who served in the Interior Department under Obama and now runs the public lands program at the Center for American Progress, in an email. “No one wanted questions raised about improper use of the information.”

The final National Petroleum Reserve report, which was published on December 22, is the first of several USGS assessments of federally owned land on Alaska’s environmentally sensitive and oil-rich North Slope. According to the study, estimated oil deposits in the area are significantly higher than previously reported.

During his visit to Alaska in May, Zinke also outlined plans to carry out assessments of the Arctic National Wildlife Refuge, an iconic 19 million-acre preserve, some of which was recently opened up to oil and gas development as part of the Republican tax overhaul. Just four years earlier, Bernhardt had represented the state of Alaska in an unsuccessful lawsuit against the Obama administration aimed at allowing seismic testing in the refuge. Now, with ANWR’s long-coveted oil and gas reserves finally becoming available to industry, the forthcoming USGS assessments will be eagerly anticipated.

But in the aftermath of Hitzman’s resignation, environmental watchdogs are asking whether the department’s political leadership and the rest of the Trump administration can be trusted to oversee scientific research into potential energy resources. “The situation raises serious questions as to whether Zinke’s team will respect the integrity of the scientific process,” said Kelly. “The American public should feel confident that their government is one where policy fits the science—not the other way around.”

Hitzman Resignation Letter (p. 1)
View entire document on DocumentCloud
This article was reported in partnership with The Investigative Fund at The Nation Institute, now known as Type Investigations.