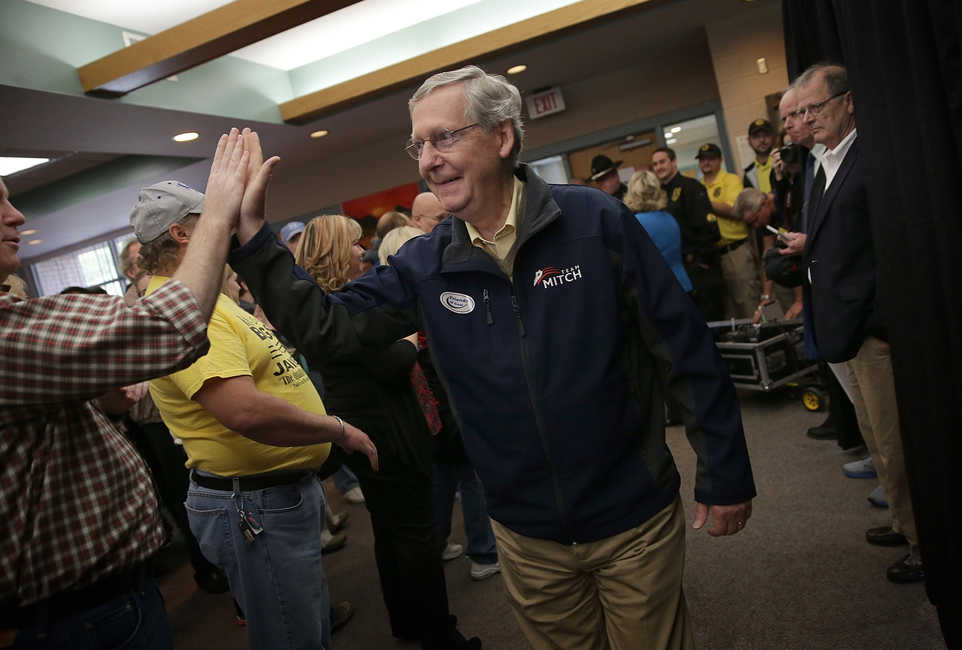 The Supreme Court's Citizens United decision, which allowed corporate and union money to flow freely in American elections, rested on a critical assumption: that so-called outside groups would not corrupt the political system because they would be legally separated from the candidates. In his majority opinion, Justice Anthony Kennedy acknowledged that without a fire wall between the candidates and outside groups making “independent expenditures,” deep-pocketed donors would come to have an undue influence over politicians. “By definition,” Kennedy wrote confidently, “an independent expenditure is political speech presented to the electorate that is not coordinated with a candidate.”

In the wake of the ruling, however, candidates have been forging close bonds with the outside groups from which they are supposedly independent, but that are spending vast sums to put them in office. Often the sharing of consultants and ad makers means that any “fire wall” is merely symbolic. But there have been no consequences for these potential violations of federal law, because there's been no enforcement of the law, thanks to partisan gridlock at the Federal Elections Commission (FEC).

The growing phenomenon has been showcased by both Republican and Democratic candidates in the marquee races of the current election cycle.

GOP Senator Mitch McConnell of Kentucky, the minority leader and the loudest voice on Capitol Hill in support of private influence over election campaigns, is relying upon a constellation of outside groups to shore up his re-election bid as he faces one of the toughest challenges in years, from Democrat Alison Lundergan Grimes. In many cases, the pro-McConnell outside groups have close personal links to the candidate and his campaign.

Take Larry McCarthy, the veteran Republican political television producer, who rose to fame in 1984 for creating the “Hound Dog” spot that catapulted McConnell to the Senate (one of the “Top 10 Game-Changing Political Ads of All Time,” according to Advertising Age). Today, McCarthy is simultaneously working for McConnell and for a Super PAC that is legally barred from coordinating with the candidate, American Crossroads, which, along with its 501(c)(4) affiliate, Crossroads GPS, has spent over $1.6 million on the Kentucky race. In the 2012 presidential election, McCarthy crafted ads for many of the leading anti-Obama Super PACs, but in deference to federal law prohibiting coordination between outside money and candidates, he did not work directly for Mitt Romney. Since then, the ad maker has apparently dispensed with any concerns about juggling work from candidates and from unregulated outside groups.

Consider, also, the fact that Josh Holmes, McConnell's chief of staff and campaign adviser, is married to Blair Latoff Holmes, the media director of the US Chamber of Commerce, a corporate-funded nonprofit that has spent more than $1 million to boost McConnell. And that, this past summer, the Koch brothers–backed Americans for Prosperity hired a director for its newly opened Kentucky branch — the wife of a member of McConnell's Senate staff.

Both the Chamber and Americans for Prosperity are prohibited from coordinating with McConnell's campaign on explicit efforts to re-elect the senator. But discussions between a husband and wife would undoubtedly be regarded as beyond the purview of campaign regulators, who have already shown a lack of interest in enforcing or investigating the no-coordination rules.

The FEC remains gridlocked by a 3-3 partisan split among its commissioners, with all three Republicans voting in lockstep to block any serious investigation of illegal coordination. Though staff may review allegations of wrongdoing, the FEC may only formally open an investigation with the approval of at least four commissioners. The current Republican chair of the commission, Lee Goodman, was recommended by McConnell himself. The FEC has provided what experts decry as a narrow definition of coordination and has declined to follow up on multiple requests to look into potential violations of the law. The Campaign Legal Center, a nonprofit that lobbies for campaign-finance limits, has filed nearly a dozen complaints with the agency to request an inquiry into illegal coordination since 2010, but the FEC has failed to act.

“The FEC has some incredibly gifted and hardworking employees,” says Ciara Torres-Spelliscy, an associate professor at Stetson University College of Law. “Unfortunately, at the commission level, the FEC was designed to fail and does. But deadlock after deadlock at the FEC leaves the distinct impression that if an electoral spender breaks the rules, there is little risk of legal sanction.”

Beyond the FEC, the only federal agency that could plausibly take up the charge is the Justice Department, which has historically deferred most action back to the FEC. Although the Justice Department has independent authority to act on the criminal provisions of campaign-finance law, which apply when a violation is “knowing and willful,” it pursues very few cases.

Eagle-eyed campaign watchers have noticed that outside-spending groups often air their advertisements just as the candidate's own ads go off the air, meaning that voters never stop seeing ads from a certain point of view, as Bloomberg News reported in August. Increasingly, the ads even carry the same theme and identical cuts of B-roll footage. These trends are on display in the competitive Senate elections this year, from New Hampshire to Alaska. While some have theorized that the candidates and outside groups communicate via public “dumps” of video and information — which may be the case in some instances — an easier route for coordination exists: simply hiring the same consultants and media agencies.

Just as McConnell and the American Crossroads groups share an ad producer (the aforementioned Larry McCarthy), they also share a media-buying agency, Mentzer Media, which has flooded the Kentucky race with ads critical of McConnell's Democratic opponent. The Towson, Maryland–based agency has collected over $4 million this year from Crossroads (for ad buys in races across the country) and $3.2 million from McConnell.

What's more, American Crossroads — like other outside groups active in the Kentucky Senate race — has leadership that hails from McConnell's inner circle. The group's president is Steven Law, McConnell's former chief of staff in the Senate in the 1990s and a former adviser to his wife, Elaine Chao, when she served as President George W. Bush's secretary of labor. Law also sits on the board of Kentuckians for Strong Leadership, a Super PAC focused solely on supporting McConnell's re-election this year.

Another pro-McConnell outside group, the Kentucky Opportunity Coalition, a nonprofit that doesn't disclose its donors, counts several McConnell alumni among its team, including its spokesman, J. Scott Jennings, a consultant to McConnell's two previous re-election campaigns. Jennings's group has aired ads that feature video released by McConnell's campaign.

The practice of outside groups sharing consultants with the candidate's campaign is often masked by an array of subsidiaries and companies with little identifying information.

Since July, for example, Representative Ron Barber of Arizona has contracted with GMMB, the powerhouse Democratic advertising company, to produce advertisements. And throughout this year, House Majority PAC, a Democratic-aligned Super PAC, has created advertising in opposition to Martha McSally, Barber's Republican opponent in the race. House Majority PAC employed a company called Waterfront Strategies, a consulting firm that lacks a website but shares an office with GMMB. As the Huffington Post reported, Waterfront is in fact “an internal branch of GMMB” run by a GMMB managing partner. The same address is also shared by yet another Democratic media-buying firm, Great American Media, which is also employed by several campaign committees. Though Barber is prohibited from coordinating with House Majority PAC, his own campaign consultants manage the outside-money attacks on his opponent.

When contacted for comment, GMMB e-mailed a statement saying, “We take the law and compliance with the law very seriously. To ensure the most stringent security and client confidentiality, we've put in place strict firewalls, separate financial streams and password-protected areas on our computer networks.”

McSally's campaign has its own ties to outside groups, which share office space with firms working for the candidate. Just beyond the exit ramp off the George Washington Parkway in Alexandria, Virginia, a large building houses a half-dozen GOP campaign-consulting firms, including Purple Strategies, OnMessage, National Media Public Affairs and American Media. The McSally campaign directly employs OnMessage at the same time that YG Action, a GOP Super PAC aiding her campaign, retains National Media Public Affairs.

Another collection of firms sharing the same address resides across town on Canal Street. This office space was profiled by The New York Times in 2012 because of the then-novel appearance of multiple firms balancing their work for Republican outside groups alongside their work for the Romney campaign. One firm at this address, Crossroads Media, is now employed by the GOP Senate campaigns of Dan Sullivan in Alaska and Pat Roberts in Kansas. The Super PAC American Crossroads, which is active in both races, contracts with a firm called Main Street Media, a company with no website but with the same employees as Crossroads Media as well as the same address.

In mid-October, a Democratic group, the American Democracy Legal Fund, filed a complaint alleging that the Republican National Committee has engaged in a brazen violation of the FEC's coordination rules by contracting directly with a voter-targeting firm that also provides services to the largest pro-GOP outside groups, including nonprofits associated with the Koch brothers.

Still, experts are pessimistic about enforcement action. Daniel Weiner, counsel for the Brennan Center's Democracy Program and a former attorney for FEC Commissioner Ellen Weintraub, mentioned numerous potential instances of collusion. “If you had an enforcement agency that was actually committed to getting to the bottom of this stuff, some of that might have violated the FEC's coordination rules,” Weiner says. “But it doesn't really work when you've got an agency that dismisses these cases before they've even been investigated, and that's what we have happening today.

”It strains credulity that there is no coordination as the ordinary American would understand it.“

More from our series Lobbying Exposed