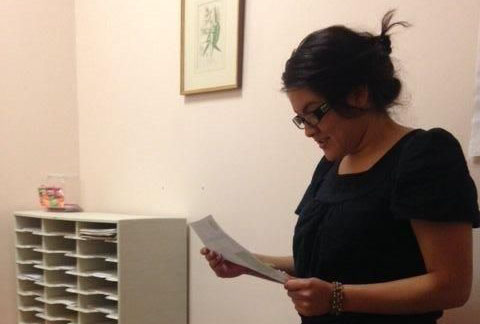 In New Jersey, Obamacare has cut the number of the uninsured by half. But one group crucial to the success of the program is missing: Latinos.

Nearly one in five people in New Jersey are Latino, and they account for a third of the state’s uninsured residents — more than any other racial or ethnic group. And yet, Latinos made up less than 7 percent of those who signed up for Obamacare in its first year.

That’s concerning not just for Latinos. If Obamacare is going to truly impact coverage rates in the state — and thereby truly bring down costs — many more Latinos will have to sign up. But outreach workers and community leaders in Newark’s heavily Latino North Ward say the broader politics of immigration have greatly complicated their work.

“I’m a priest, they trust you a lot,” says Father Luis Garcia of St. Rose of Lima in the North Ward. “But when it comes to the point of giving information to somebody they don’t know, that makes it more difficult.”

Father Garcia invited community organizers to hold an event to get people signed at the church. But when members discovered what information they’d have to share — Social Security numbers, tax information, household size — they were less concerned about health care than they were about the safety of those in their families who are undocumented.

The Affordable Care Act bars undocumented immigrants from participating in the new marketplace. But Father Garcia and others say the ban isn’t the real problem with enrollment. Rather, it’s all the complications that ban creates for people who do qualify, but who have undocumented family members.

The law only requires the person applying for coverage to submit identifying information. But in order to qualify for the tax credits that have made coverage affordable, you must enter information for all wage earners in your household–which means identifying undocumented workers in your family.

The Obama administration has stressed that, by law, no information submitted while applying for coverage can be used for immigration enforcement. But people are erring on the side of caution.

Others are confused about who’s eligible and who’s not.

“There was one women from this congregation who came to an enrollment event who didn’t realize that she could qualify because her husband’s undocumented,” says Vera Pedra, an organizer with Faith in New Jersey and who helped Father Garcia enroll his parishioners. Padra got the woman and her kids into coverage. “She was really thankful, because her kids are asthmatic and she has some ongoing chronic conditions. But her husband had diabetes as well. So it was a bitter sweet thing.”

Community organizers add that the enrollment campaign in places like the North Ward is made more difficult by the relatively few resources available to them. Since Gov. Chris Christie refused to establish a state-run exchange in New Jersey, the outreach effort depends entirely on limited federal funds and private-sector grants. In California, which established its own exchange and contributed millions to outreach, Latinos accounted for 28 percent of people who signed up for plans — more than four times New Jersey’s rate.

It’s important to note that the New Jersey enrollment figure doesn’t include people who chose not to identify their race or ethnicity when enrolling. It also does not include Medicaid, which has accounted for the bulk of newly insured residents in New Jersey. Still, Latinos’ share of those who selected plans on the exchange is so far out of proportion to the demographics of the uninsured, it suggests a real disparity.

Health advocates say that whatever challenges Obamacare outreach workers met last year will be amplified this year — because the most motivated people have already signed up. In places like Newark’s North Ward, that means convincing families that have already decided health insurance isn’t worth the risk, to give the Affordable Care Act a second look.