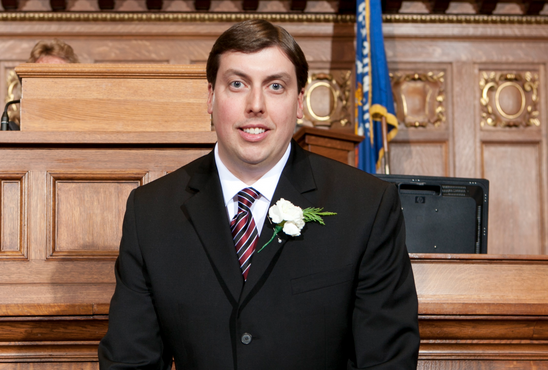 As Wisconsin Governor Scott Walker signed the so-called “right to work” bill on March 9, making Wisconsin the twenty-fifth right-to-work state in the country, labor advocates braced themselves for the stream of anti-worker bills that were almost certain to follow. Many assumed the first target would be Wisconsin's 1930s prevailing wage laws, which require that workers on public works projects be paid the established going rate for their labor, rather than allowing contractors to try to outbid each other by lowering workers' wages. Few, however, expected the legislative cluster bomb that is currently being referred to committee by a pair of Republicans: a bill to repeal the weekend.

Though labor often boasts that it helped codify the two-day work break — witness the popular pro-labor bumper sticker, “Unions: the folks that brought you the weekend” — a day of rest is protected by law in only a fraction of the states. According to the Society for Human Resource Management, thirteen states have laws mandating a day of rest for some or all workers. In states that mandate a day of rest only for certain categories of workers, those workers are often in jobs where fatigue could lead to increased accidents or deaths.

Now that might be about to come to an end in Wisconsin.

Currently, the law in Wisconsin requires that workers employed in a “factory or mercantile establishment” must receive “at least 24 consecutive hours of rest in every 7 consecutive days.” If an employer would like a worker to work seven days in a row for a limited period of time, then the two can jointly petition the Department of Workforce Development for a waiver. According to the office of Republican Representative Mark Born, who is introducing this bill in the State Assembly, there were 169 waivers requested in 2013 and 232 in 2014, and all of them were granted. Under the current system, the waiver requests must state the necessity for the waiver, and they are granted only for a limited period of time.

The new bill, which is being sponsored by Republican Van Wanggaard in the State Senate alongside Born in the Assembly, would add a provision to the “day of rest” law that could effectively nullify it. The bill would create an exemption that would allow employees to “voluntarily choose” to slave away for seven days in a row without at least twenty-four hours of rest.

Representative Born's office played down the magnitude of the bill, arguing that it merely “codified into law the waiver system and made it easier for employers and employees to make work schedules.” But this new law cuts the regulatory body out of the equation, relying instead on the troubled notion that employers would allow employees to choose “voluntarily” to give up any day of rest. As Marquette University law professor Paul Secunda explained, the idea “completely ignores the power dynamic in the workplace, where workers often have a proverbial gun to the head.” Indeed, the reason Wisconsin had passed a “day of rest” law in the first place was because employers had been abusing employees by pressing them to work too many days without break. “Now this bill will force many workers to strike a bargain with the devil,” Secunda said.

I met with Democratic State Senator Chris Larson to discuss the bill. The bill does not yet have a title, so Larson jokingly refers to it as the “Abolishing the Sabbath Act.” But the bill is no joke, Larson said, and represents an alarming trend in Wisconsin politics. Senator Larson pointed to a large painting hanging on his wall of the famous progressive era politician Robert La Follette, whose legacy, he said, had long inspired him. “But right now, we're in the regressive era of politics.”

A similar version of this bill was introduced last year at the urging of Wisconsin Manufacturers and Commerce, the state's largest business organization. But the legislature was not able to vote on it before the end of the session. However, Representative Born's office was “optimistic” of the bill's chances in this session.

Mike Browne, the deputy director of the progressive group One Wisconsin Now, explained that the timing of the bill, so soon after the passage of right-to-work, was fitting. “After rushing to pass a wrong-for-Wisconsin right-to-work law that could lower family wages by over $5,000 a year it makes sense Republicans would introduce a law to repeal the weekend. After all, with lower wages workers will see they're going to have to work that much more to try to get ahead.”

This article was reported in partnership with The Investigative Fund at The Nation Institute, now known as Type Investigations, with support from the Puffin Foundation.

Moshe Z. Marvit is coauthor of Why Labor Organizing Should be a Civil Right: Rebuilding a Middle-Class Democracy by Enhancing Worker Voice.