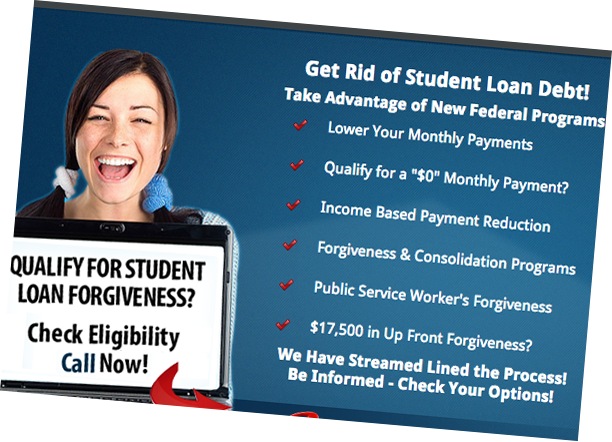 A screenshot from the Student Aid Center's homepage.

In February 2014 Kim Kotary was living in Queens, NY, working 25 hours a week in three part-time jobs at nonprofits and as a freelance crafts teacher and designer, and worrying how she'd ever pay off the $20,000 she borrowed to earn a master's from New York's Fashion Institute of Technology back in 2002. So when she heard a radio ad offering information about how those working for nonprofits could get student debt forgiven, she called the 800 number. A phone rep told her Broadsword Student Advantage could get her monthly payments suspended, based on her poverty-level income, and help her apply to get her debt forgiven after ten years.

Kotary agreed to pay Broadsword $500 and signed its forms online, without, she admits, reading them closely. On top of the $500, Affordable Life Plans, a Securities & Exchange Commission-registered investment adviser, started taking $29.95 a month from her bank account. Then, last August, Kotary lost her main part-time nonprofit gig. Finally, this past March, after 13 months of paying, she discovered she wouldn't be eligible for the debt forgiveness unless she worked 30 hours a week in the not-for-profit sector, and that she could have applied for forgiveness herself, for free, at www.studentloans.gov. “When I found out it was free, it really pissed me off,” says Kotary, 43, who has stopped the monthly payments. “I was told that they could help me save more than they charged me for the services.”

Arguably, she got off cheap–Affordable Life typically charges $49.99 a month, according to a lawsuit the Illinois Attorney General filed last year charging Broadsword with fraud and with using Affordable, a sister company, to charge fees that would otherwise be barred by Illinois' Debt Settlement Act. In court papers Broadsword denies wrongdoing and says that it was simply soliciting business for Affordable, which as an SEC-registered adviser is exempt from the state's debt settlement law.

In the wake of the 2008 housing crash, mortgage debt “relief” companies sprang up like poison mushrooms. Promising to rescue homeowners with underwater mortgages, they charged exorbitant–and sometimes illegal–fees. Now similar hucksters have targeted a new group of drowning debtors. (For advice on how to avoid debt repayment problems, go here.) 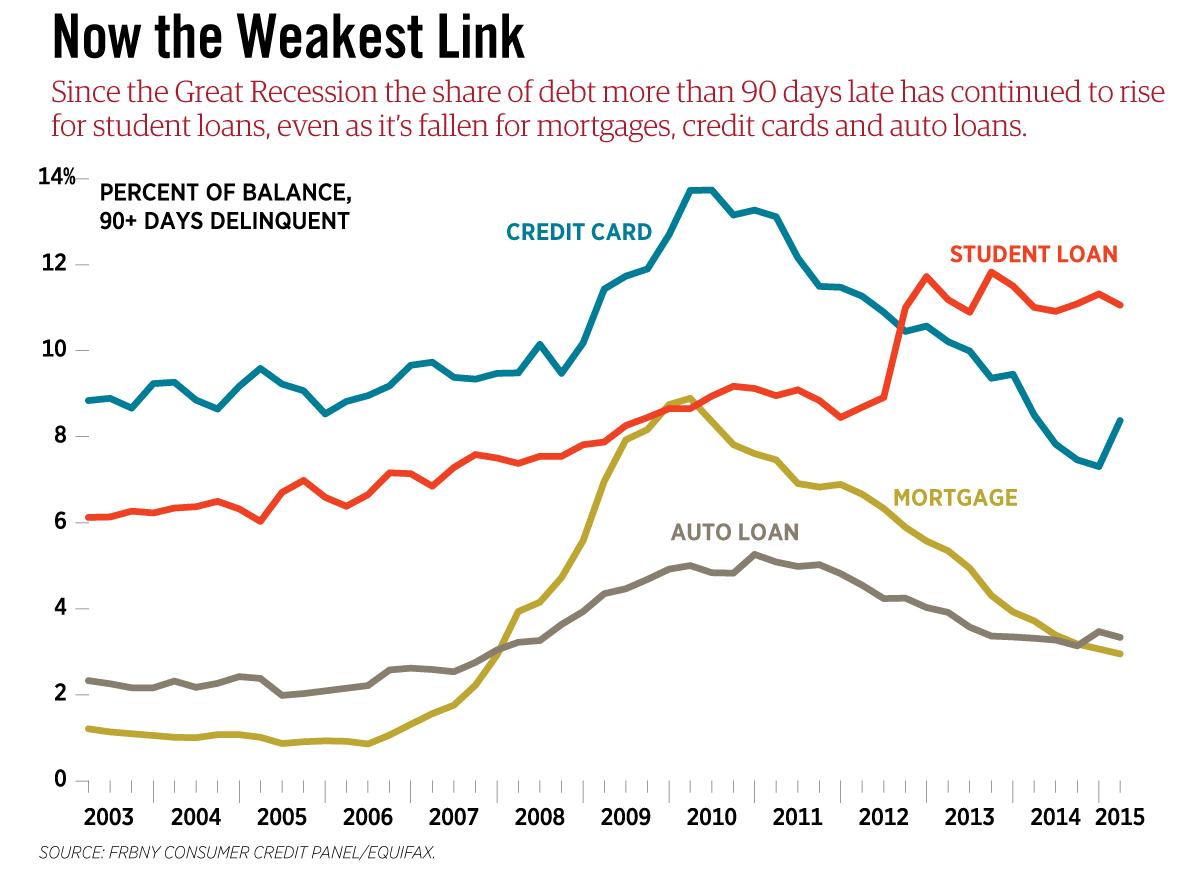 Some of the new student debt relief outfits promote their services via direct mail and others advertise on radio or cable TV. But mostly, they go where the Millennials are: online. They pop up on Facebook, Instagram and Twitter and dominate the search results for terms such as “student loan relief,” “student debt settlement,” and “Obama student loan forgiveness,” overshadowing the US Department of Education's website.

When we conducted repeated searches of those terms, 6 of the 18 sites that most frequently came up high in the results had URLs that included the word “federal” or “US” or “USA.” Yet not one was part of the government. In addition, 7 had addresses ending in “.org,” which might lead a naive debtor to think they were not-for-profits, which is not a requirement for a dot-org registration.

Students can lose more than just the fees they shell out if they turn to the wrong places for help. A consumer fraud suit Minnesota's Attorney General filed in July against Student Aid Center, Inc., which does business on the Web at studentloanforgivenessplans.org, asserts some clients ended up in a worse position while paying the firm to solve their problems. A 36-year-old manager who owed $67,000 had his wages garnished and a physical therapist who owed $100,000 got hit with late fees, the suit alleges. It notes that more than 800 Minnesota residents have paid as much as $1,500 to Student Aid Center “for something they could do on their own for free.”

“We're definitely not a scam, that's for sure,” responds Damien Alvarez, the co-president of Student Aid. “We process the paperwork and we see it through … you could enroll yourself in the wrong program,” Alvarez told FORBES.

The potential market for the likes of Student Aid Center is huge.

Some 40 million Americans hold nearly $1.4 trillion in student debt and every day more and more of them slip behind on their payments. The federalConsumer Financial Protection Bureau (CFPB) estimates that 8 million borrowers are already in default. Moreover, the pipeline of potentially troubled debtors is stuffed.

As of Mar. 30, 2.5 million borrowers with direct student loans from Uncle Sam were delinquent on their payments, although not yet in default, and 6.1 million had been granted some sort of temporary “forbearance” or “ deferment” of loan payments, a sign of possible trouble to come. (Another 9.7 million borrowers hadn't yet made payments because they were still in school or in a six-month “grace” period after leaving school.)

“The rapid rise in student loan defaults has created a climate for scammers to proliferate and prey on struggling borrowers,” observes Rohit Chopra, the former student loan ombudsman of the CFPB. “This bears a disturbing resemblance to the so-called foreclosure rescue scams that emerged in the wake of the mortgage crisis.” 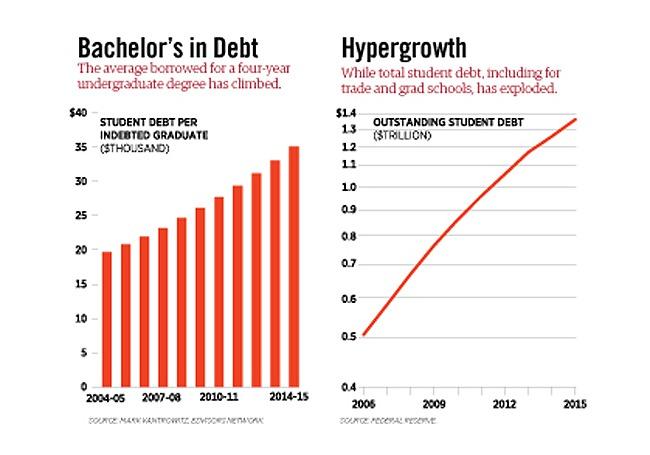 Student debt counseling for a fee can be a legitimate service–and a needed one. Many colleges do a poor job of advising students about the debt they're assuming.

The US Department of Education (ED), which runs the federal student loan programs, offers little direct or personalized help and last December was criticized by its own Inspector General for lacking a “comprehensive plan or strategy to prevent student loan defaults.” Meanwhile, there have been widespread complaints about the performance of student loan servicers, which the CFPB moved to regulate in December 2013.

Aggressive debt-relief pitches typically play off information–and misinformation–about a set of federal programs that allow some of those with outsize debt to pay only 10% or 15% or 20% of their “discretionary” income and have any remaining balance forgiven after 10, 20 or 25 years.

But those “income-based” and “income-contingent” plans are available only for federal and federally guaranteed loans, not private ones. Plus, the ten-year forgiveness period is only for those who spend that time in public or charitable sector jobs. And students can apply to these federal programs by themselves for free.

“My main problem with student debt relief is that it is a scam,” says Andrew Weber, an Athens, Ohio debt counselor who has worked with student debtors since 2013. A legitimate counselor, he says, can help guide a borrower through his options but can't grant relief to anyone. Weber is certified by the National Association of Certified Credit Counselors, a voluntary not-for-profit group, which requires applicants to complete training materials and pass a test.

None of the 18 debt relief firms that showed up high in our Web searches volunteered information about their “counselors' ” credentials and the folks we talked to at the firms all sounded like salesmen. The fact is, anyone can set up shop as a student debt counselor, since the business isn't directly regulated.

Even without direct regulation, however, a variety of federal and state consumer protection laws should prevent the most predatory practices. For example, regulations bar credit repair operations (which the student debt relief advisers arguably are) from charging a fee before a service is provided and prohibit charging an ongoing monthly fee for access to free government services. Using these and other laws, federal and state regulators have brought more than 500 enforcement actions against mortgage debt relief companies, forcing many of them to cease operations and pay refunds and/or penalties.

So far, however, enforcers have sued just 10 student debt workout outfits (for the list, go here). Significantly, Illinois Attorney General Lisa Madigan, who has sued seven of the firms, wrote to US Secretary of Education Arne Duncan in June warning that “we cannot simply litigate away this problem.” She called on him to set up a certification process to help borrowers distinguish “legitimate counselors” from “an uncertified entity that is most likely a costly sham operation.” And she pointed to a precedent: The Department of Housing & Urban Development has already set up a program to certify mortgage workout counselors.

Under Secretary of Education Ted Mitchell, who oversees student aid, told FORBES his department is working on a “clear road map to borrower relief, better online tools to lower payments, an integrated complaint system and exploring the borrower experience from front to back.” But he wouldn't say when those changes will be rolled out or exactly what they would entail. A spokesman, however, later said that certification for debt counselors won't be part of the ED's proposals.

As for the CFPB, despite Chopra's concerns, it has brought just two suits against the debt relief peddlers. One suit charges that Irvine WebWorks, Inc., which does business online as StudentLoanProcessing.us, and its owner, James Krause, violated laws governing credit relief and telemarketing by charging fees in advance of providing services and misrepresenting what it does and its connection to the government. The CFPB is seeking penalties and $6 million in refunds for customers–an indication that thousands of debtors were allegedly misled. WebWorks denies wrongdoing and says it has changed one practice the CFPB objected to–using a seal with the tree of knowledge that looks suspiciously like the official seal of the Department of Education. Instead, its current seal features two American flags.

“We're looking forward to our week in court. We will prove that our services give a lot of benefit to the clients we charge,” Krause said in an interview. He insisted the firm isn't a credit repair outfit, but simply helps students consolidate their loans and get into a payment plan they can afford.

Natalia Abrams, executive director of Studentdebtcrisis.org, a non-profit that focuses on college debt issues, says her organization finds the online debt relief firms to be “very deceptive.” Debtors end up at these sites, she says, because “they don't know where to turn and don't feel that anyone cares about them.”

That's what led Diana Johnson to go online in search of help. Johnson, 50, has a total of $100,000 in federal and private student debt, a B.S. in psychology from Portland (Oregon) State University and a job as a wellness programs director at an assisted living facility in Portland paying just $14.95 an hour. Last November, hounded by debt collectors, she called a student debt relief service she found online. It offered to file an income-based repayment application for her for $400. “I was a little scared and desperate, so I gave the sales guy my debit card and some other pertinent information,” she says.

But she immediately did some more research and realized she could file for the repayment plan herself for free and that it would only cover her federal loans regardless. She called back the salesman, and after much back-and-forth, was able to cancel before the money was taken from her bank account. “He didn't make it easy, using all sorts of guilt and excuses why I shouldn't do it myself,” she says.

Since then Johnson has filed three complaints with the CFPB against her loan servicer, which, she says, prompted a new responsiveness on its part. It reduced the monthly payment due on her loans. Terrific that it worked for Johnson, but hardly a strategy for protecting millions of vulnerable, stressed-out student debtors.

This story was reported in partnership with The Investigative Fund at The Nation Institute, now known as Type Investigations. Additional reporting by Maggie McGrath.