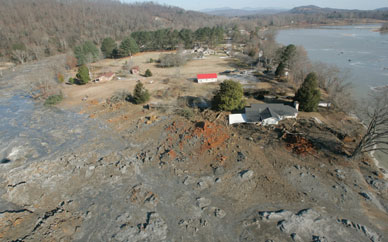 The TVA is the largest public provider of electricity in the nation, providing power to 670,000 homes and burning through some 14,000 tons of coal per day. On December 22 the authority made headlines when one of its retention ponds collapsed, letting loose an avalanche of coal ash–the toxic residue left over when coal is burned. More than 5 million cubic yards of ashy mud pushed its way through a neighborhood and into Tennessee’s Emory River, knocked houses off foundations and blanketed river water with plumes of gray scum that flowed downstream.

New evidence indicates that in the wake of the disaster, the TVA may have intentionally collected water samples from clean spots in the Emory River, a major supplier of drinking water for nearby cities and a popular site for recreational activities such as swimming and fishing. Third-party tests have found high levels of toxins in the river water and in private wells, while the TVA has assured residents that tap water, well water and river water are safe.

In the days after the spill, the TVA assured the public that the coal ash was “inert material.” But soon questions emerged about the chemistry of the ash, particularly the presence of toxic elements like selenium and arsenic. Scientists said the toxins were dissolving unseen into the Emory, which feeds into two other rivers–the Tennessee and the Clinch–and supplies municipal water treatment plants.

Trust in the authority, a massive local employer and an icon of the Roosevelt administration, has faded. In February an internal TVA memo obtained by the Associated Press showed that the authority was polishing its public statements. In that document, TVA officials changed the description of the disaster from “catastrophic” to “sudden” and “accidental” and removed the phrases “risk to public health” and “risk to the environment” as reasons for measuring water quality. At least four lawsuits have been filed since the December spill, and a federal judge has ordered the authority not to destroy any documents. Meanwhile, a recent survey by Tennessee’s state health department said that one third of the residents living near the spill are reporting breathing problems.

Many residents question government claims that water treatment facilities will effectively filter tap water for toxins such as arsenic and selenium. They also voice deep concerns about a longer list of toxins swirling in untreated river water and those appearing, according to private water samples, in private drinking wells. Some residents have complained of a gray film in their tap water and of a burning sensation on their skin and in their eyes after taking a shower.

Officials have consistently maintained that the drinking water is safe. On December 23 the Environmental Protection Agency tested water near a municipal drinking water treatment plant and found arsenic 149 times higher than that allowed by federal drinking water standards. Yet in a public notice the agency said the heavy metal, which is linked to cancer, would “likely” be filtered out by municipal water treatment. Days later, with outrage and litigation mounting, a TVA environmental officer, Neil Carriker, told reporters that the gray goo in the river was made up of unsightly but harmless microscopic spheres of glass called cenospheres, which float in plumes downriver. In a December press conference, he assured the public that the river water and drinking water were safe, points consistently reiterated by the TVA.

Early in the disaster, for example, on January 9, the environmental group Appalachian Voices, working with a biology professor at Appalachian State University, took water samples from the Emory, Clinch and Tennessee Rivers, in which they found arsenic levels 300 times higher than the drinking water standard. The group documented wide differences between official TVA data and data collected by the group and other watchdog organizations. The TVA later reported data showing arsenic levels to be twenty times lower than safe standards. A little earlier, on December 30, two other environmental organizations–the Tennessee-based United Mountain Defense and the Environmental Integrity Project (EIP), a Washington, DC, group founded by a former EPA regulator–found arsenic in local river water to be eight times higher than safe levels. At another point, a Duke University test of standing water in a tributary of the Emory River showed arsenic was nine times higher than safe standards. Again, TVA tests were the only outliers. The authority’s subsequent tests on January 14 found arsenic levels to be forty times lower than safe drinking water standards.

EIP and United Mountain Defense reported the results of further tests in February, which showed that water quality criteria for arsenic, lead, selenium, cadmium and copper had all been violated and that drinking water standards had been exceeded not only for arsenic but also for antimony, beryllium and lead–which are toxic at certain doses. Experts say that, given the dynamics of river flow and contamination, test results will often vary, sometimes greatly. “You expect to find fluctuations,” said Jeff Stant, a trained biologist and EIP official. “What’s troubling is that TVA’s data is suspiciously consistent.” Gregory Button, an anthropology professor at the University of Tennessee, shares Stant’s concern. “In disaster situations like this, science is always a point of contention,” he said. “But the difference is so large in this case that there’s no trust.”

When asked about early reports showing water quality differences, TVA spokesperson Barbara Martocci, speaking during a December interview with The Nation, chose not to comment on the data, saying only that the TVA uses EPA-certified laboratories. (Data reported by EIP and United Mountain Defense also came from EPA-certified labs.) The TVA is “eager to review the findings of any reports or studies that might show differences between TVA’s water quality reports, and we will take those reports seriously,” said TVA spokesperson Gil Francis. “I don’t understand why the TVA, the Tennessee Department of Environment and Conservation and the EPA aren’t finding the same problems as these private groups,” Francis added.

Chris Irwin, a lawyer with United Mountain Defense, said, “The gap between our data and theirs strongly suggests that the TVA has practiced selective testing.” He pointed out that the cenospheres tell the naked eye where the chemical contamination is. “If you want to test clean,” he said, “then you simply go to the side where the plume isn’t.” Charles Norris, the senior geochemist with the Colorado-based environmental geology firm Geo-Hydro, said that Tennessee’s state-approved program for representing river water quality “has demonstrably been unable to account for the variability that’s being picked up by third-party sampling.”

In recent weeks, an inquiry in conjunction with The Nation Institute’s Investigative Fund uncovered satellite positioning locations for the authority’s water sampling stations inside a TVA dredging permit application. The data were pinpointed on aerial maps and shown to independent experts in an effort to determine whether the TVA skewed its choice of water sample sites.

Donna Lisenby, a river monitor for Appalachian Voices, said the location data gave critics a smoking gun. “You can skew the data by putting testing points in odd locations, such as behind a sandbar or far upriver away from the spill,” she said. “The GPS locations show that that is what the TVA has been doing.” Bob Gadinski, a former hydrologist for the State of Pennsylvania, said that the TVA’s use of only five testing locations was “too few.” He said the agency planned to test at a single depth for each location rather than at multiple depths and pointed out that at least three locations were placed at points in the river where contamination was less likely to reach (for example, one sample location should have been in the main channel of the river and was instead placed near the bank). After reviewing the GPS data, Gadinski concluded that “the TVA isn’t interested in properly mapping the contaminants in that river.” Representatives from EIP and United Mountain Defense, as well as a biology professor at Appalachian State University, all viewed the site locations; all agreed the locations were “intentionally biased for nonsignificance” in ways that would not give a true reading of the contamination map. In addition, Norris said the river monitoring programs of independent groups are “better programmed” to find and map contamination than the authority’s testing program. According to Stant, “They either didn’t know that this testing scheme was poorly designed, or they knew and didn’t care.”

At a March 5 community meeting, state and federal officials again reiterated that government testing shows air and water near the site to be safe. Meanwhile, Rick Cantrell, a member of Tennessee Coal Ash Survivors, an advocacy organization formed in the wake of the disaster, told the Associated Press that his group’s water quality data has “either been disregarded or just brushed off by TVA.” Button shares Cantrell’s assessment. TVA officials, he said, “make these global statements and avoid having to answer real questions about the data discrepancies.” At the minimum, he said, the authority should be more forthcoming about its science protocols.

Another issue raises concerns: the TVA’s claim that cenospheres are inert. A study conducted in the 1970s by Alex Gabbard, now a retired scientist at the Oak Ridge National Laboratory, seems to show that the TVA misrepresented what is known about these particles. “It’s true that cenospheres by themselves are harmless,” said Gabbard, but his research determined that metals including uranium bind to the otherwise benign cenospheres, potentially turning them into a vector for toxins. “A main question, is,” he said in an interview with The Nation, “What about all the other stuff in the ash?”

A cloud also hovers over the TVA’s approach to well water sampling. By February 3 TDEC had sampled more than 100 private groundwater wells within a four-mile radius of the plant, announcing that all sample results were within safe drinking water standards. But, again, critics suggest the data lacked credibility.

“Our data showed all kinds of heavy metals in private wells,” said Jeff Stant of the EIP. “I don’t understand how official data can show otherwise.” Stant told The Nation that while his team was not able to test wells at the spill site because they had been sealed off by the TVA, the wells EIP tested showed high levels of sodium, which poses a risk for people with heart problems, as well as the metals aluminum and manganese.

TDEC has issued an enforcement order against the TVA for violating water quality standards that protect aquatic wildlife, but an agency spokesperson said that “results to date have not indicated exceedances of the primary drinking standards for metals.”

Research support was provided by the Puffin Foundation Investigative Fund at The Nation Institute.