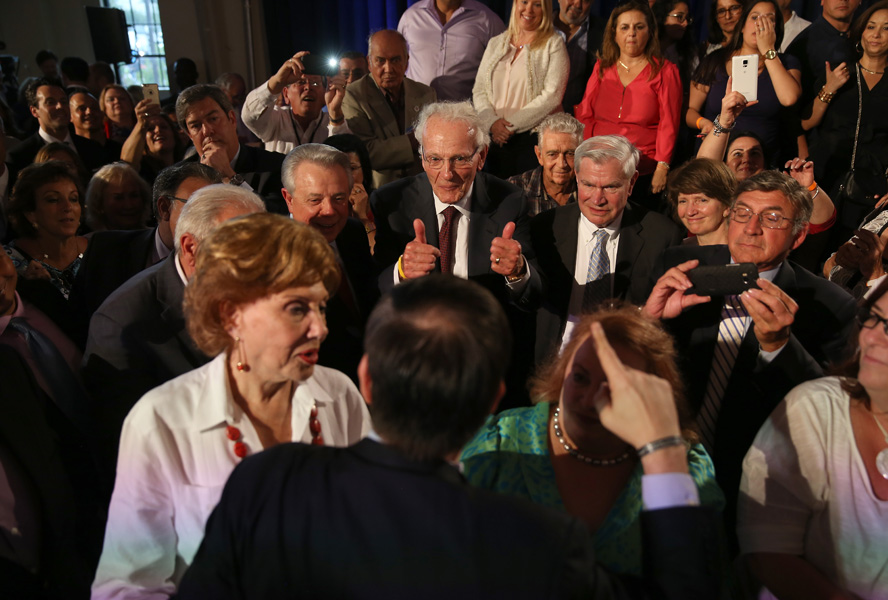 JOE RAEDLE/GETTY IMAGES
Norman Braman gives the thumbs up to Senator Marco Rubio after he announced his candidacy for the Republican presidential nomination in Miami, April 13, 2015.

Despite the continuing prominence of Republican outsiders Donald Trump and Ben Carson in presidential primary polls, key GOP donors are seeking to anoint Senator Marco Rubio as an alternative — and the freshman senator has gone far beyond any other candidates in tailoring a foreign-policy platform that appeals to those hawkish billionaires. Should he win the GOP nomination, their financial support may prove critical in a general election campaign likely to cost more than $2.5 billion.

That support may prove costly to Rubio in other ways, however, since to please those big donors, he has endorsed policies that echo the least popular — and most unsuccessful — US foreign endeavor of the past 50 years.

In the Middle East, Rubio is committed to rolling back the Iran nuclear deal and defending the illegal construction of settlements in the Israeli-occupied territories. That shift marks a return to the hawkish neoconservative foreign policy of the George W. Bush administration, including the pursuit of regime change in Iraq, with disastrous consequences.

Closer to home, Rubio, whose parents emigrated from Cuba three years before the Cuban revolution, opposes the Obama administration's establishment of diplomatic ties with Havana. He also opposes any rollback of the embargo, a policy that has failed for five decades while losing public support, even among Republicans.

If Rubio's views seem out of sync with the electorate, that might reflect the priorities of the deep-pocketed conservatives behind him, who prioritize their niche foreign-policy issues above nearly all else. (His eagerness to cut their taxes drastically probably doesn't hurt, either.)

Rubio's campaign slogan, “A New American Century,” strikingly echoes the name of the neoconservative Project for the New American Century (PNAC), founded by Weekly Standard editor William Kristol in the 1990s, which helped to lay the groundwork for the invasion of Iraq. The Florida senator's proposed foreign policy in the Middle East sounds like it could have come straight out of the first term of the George W. Bush administration — or a PNAC newsletter.

In October, the senator released a video in which he cryptically remarked, “What this president and his administration are doing in Israel is a tragic mistake.” Rubio accused the president of betraying “the commitment this nation has made to the right of a Jewish state to exist in peace.”

Rubio is determined “absolutely” to renege on the Iran nuclear deal — an agreement made not just between the United States and Iran but also Russia, China, the United Kingdom, Germany, and the European Union. He rejected the Obama White House's denunciation of Israeli settlement expansion in East Jerusalem last year as “deplorable.”

Yet Rubio's aggressive approach to US Middle East policy seems tame compared with the opinions expressed by his longstanding patron, Norman Braman.

Braman, a billionaire auto dealer and a longtime supporter of the senator's political career who has personally employed Rubio as a lawyer, has contributed $5 million, thus far, to a Super PAC supportive of his candidacy. Through a now-defunct family foundation that employed Rubio's wife, Braman donated $311,000 to American Friends of Ariel, a US-based nonprofit that supports the Israeli settlement in the West Bank. The settlement is illegal under international law and a contradiction of longstanding US policy, which opposes settlement construction and expansion.

Braman doesn't hesitate to share his extreme views on the US-Israel relationship. In a 2011 interview, he explained that United Nations agencies have “developed into organizations that have one basic purpose, and that is to discredit Israel and actually delegitimize Israel.” And Braman's primary concern about a possible downturn in the economy is that the United States might not be able to guarantee a “great Israel.”

He said: “I worry about that because I really believe that a strong America is the greatest factor which insures a great Israel and a sustaining Israel. A weak America poses a threat to the future of Israel. So I concern myself about the United States, our economy, and the general situation in this country.”

And Braman's viewpoint is mild compared with a far more notorious figure who is soon expected to announce his endorsement of Rubio, according to news reports. Not only is Sheldon Adelson the biggest of the Republican mega-donors, based on his spending over the past few cycles, but his foreign-policy views make Braman's opinions seem mild.

Speaking at an event in 2013, Adelson famously quipped that the United States should launch a nuclear missile at Iran to send the message that “we mean business.”

In his book An American Son, Rubio writes that as a child, “I boasted I would someday lead an army of exiles to overthrow Fidel Castro and become president of a free Cuba.” While he may have abandoned his childhood dream of storming the beaches at the Bay of Pigs, his Cuba policy positions remain firmly stuck in the Cold War mindset.

In July, Rubio told The Guardian that he would “absolutely” reverse the steps Obama has taken to normalize relations with Cuba, and he defended the trade embargo — although a Pew Research poll taken around that time showed that 72 percent of Americans support ending it. “We could have used, and can use, economic sanctions through the embargo as a leverage to gain democratic concessions and openings for the Cuban people,” the senator insisted.

Not surprisingly, perhaps, Rubio's super-PAC enjoys the support of one of the key donors to the US anti-Castro lobby, Benjamín León Jr. Besilu Stables, a company León owns, contributed $2.5 million to the Rubio-supporting super-PAC called Conservative Solutions.

León was born in Cuba, immigrated to the United States in 1961, and founded Leon Medical Centers, a Miami-based healthcare provider serving Medicare members. In 1994, he made $500 million by selling the HMO Clínica Asociación Cubana to United Healthcare. “The Leon clinics are based on the model of healthcare in pre-Castro Cuba, where families often paid monthly fees to a neighborhood clinic and used it for all their basic healthcare needs,” according to a glowing Miami Herald profile of León's company in 2009.

In 2013, Leon Medical Centers escaped a whistleblower False Claims Act lawsuit that accused León, along with Healthspring Inc., of providing illegal kickbacks to Medicare patients, including free meals, transportation, and other inducements. A judge dismissed the case, finding that the whistleblower's revelations were based on publicly disclosed facts rather than firsthand evidence.

According to donor rolls (here and here) acquired by The Nation, León contributed $100,000 to the right-wing Cuba Democracy Advocates (CDA) between 2012 and 2013, making him one of the group's biggest donors. The group primarily appears in the news when its executive director, Mauricio Claver-Carone, is interviewed. Tax disclosures show that over half of the group's annual revenue goes to paying his salary.

Politico identified Claver-Carone last spring as an unofficial liaison on Capitol Hill for Rubio's campaign, seeking to secure the endorsements of members of Congress. His blog, Capitol Hill Cubans, spent much of October republishing a number of articles from right-wing news outlets claiming that Cuban soldiers are assisting the Assad regime in Syria.

Last month, the Cuban government issued a statement saying it “categorically denies and refutes the irresponsible and unfounded information regarding the supposed presence of Cuban troops in the Syrian Arab Republic,” and White House spokesperson Josh Earnest said the US government had seen no evidence to support the story.

No correction was issued on Claver-Carone's blog.

Claver-Carone and the Rubio campaign did not respond to requests for comment about Claver-Carone's role in the campaign.

Braman and León are donors embedded among Rubio's Jewish and Cuban political constituents in Florida. But a successful political campaign will require fundraising from affluent donors across the country. New York–based hedge fund mogul Paul Singer may prove crucial in forming and maintaining such a network.

Singer's endorsement of Rubio at the end of October didn't come as a surprise. The founder of hedge fund Elliott Management, noted the New York Times, is “known for his caution and careful vetting of candidates and [being] passionately pro-Israel and a supporter of same-sex marriage.”

Indeed, Rubio, in both his opposition to the Iran nuclear deal and condemnations of the Obama administration's criticism of West Bank settlements, has proven himself a reliable ally of hardline supporters of Israel such as Singer, Adelson, and the Republican Jewish Coalition (whose board includes both Singer and Adelson).

Singer played a central role in funding politicians and think tanks opposed to the Obama White House's nuclear diplomacy. He provided significant contributions to leading Senate opponents of the Iran deal such as Mark Kirk, Tom Cotton, and Kelly Ayotte, as well as neoconservative organizations such as the Foundation for Defense of Democracies, The Israel Project, and the Republican Jewish Coalition.

For years, Singer has had his eye on Rubio. Between 2009 and 2014, Elliott Management provided Rubio's second-largest source of campaign contributions, sending him checks that totaled $122,620. And the hedge fund's support coincided with Rubio's advocacy of foreign-policy positions from which Elliott Management would stand to profit directly.

Elliott leads a group of holdout creditors who bought Argentine sovereign debt at a steep discount and have since sued the country to pay up in full — but Argentine President Cristina Fernández de Kirchner, whose term ended on December 10, has refused.

While Singer's fund could stand to collect as much as $2 billion, the groups funded by his contributions — including the American Enterprise Institute, The Israel Project, and the Foundation for Defense of Democracies — have promoted the controversial work of the late Argentine special investigator Alberto Nisman, who claimed that senior Iranian officials signed off on the 1994 bombing of the Argentine Israelite Mutual Association in Buenos Aires, which killed 85 people — and that Kirchner's government was involved in a cover-up. In January, Nisman was found dead from a gunshot wound at his home in Buenos Aires, one day before he was supposed to present his allegations to the Congress of Argentina.

Recipients of Singer's funding, while rarely disclosing their connections with the hedge-fund mogul, frequently label Kirchner an anti-Semite and claim she is trying to hide Iranian involvement in the bombing. Nisman's report relies nearly entirely on testimony from members of the Mujahedin-e Khalq, an exiled Iranian opposition group that former members liken to a cult, as well as a discredited Iranian intelligence agent.

In May, Rubio joined the campaign against Kirchner's government, introducing a largely unnoticed Senate resolution that demands a “swift and transparent” investigation into the prosecutor's death and accused Kirchner of conspiring “to cover up Iranian involvement in the 1994 terrorist bombing.”

In a letter acquired by the New York Times, Singer endorsed Rubio, praising his work on the Senate Foreign Relations Committee: “He is accustomed to thinking about American foreign policy as a responsible policy maker. He is ready to be an informed and assertive decision-maker.”

With Singer's endorsement and with Adelson's nod all but guaranteed, Rubio is emerging as the preferred candidate of the Republican Party's big-donor class. The challenge for Rubio, however, will lie in explaining his ultra-hawkish foreign-policy positions and hedge-fund connections to an American public suspicious of the 1 percent, weary of military entanglement in the Middle East, and largely opposed to the Cuban trade embargo — as well as a GOP base that has embraced Donald Trump's denunciation of hedge-fund managers getting away with “murder” under the current tax code.

If Republican primary voters ultimately reject Trump's populist rhetoric and Carson's outreach to evangelical Christians, it could mean the nomination of a candidate with some of the most hawkish foreign-policy positions of any modern-day nominee from a major party. So far, those positions, however repellent to most Americans, have only served to advance Rubio's political career.