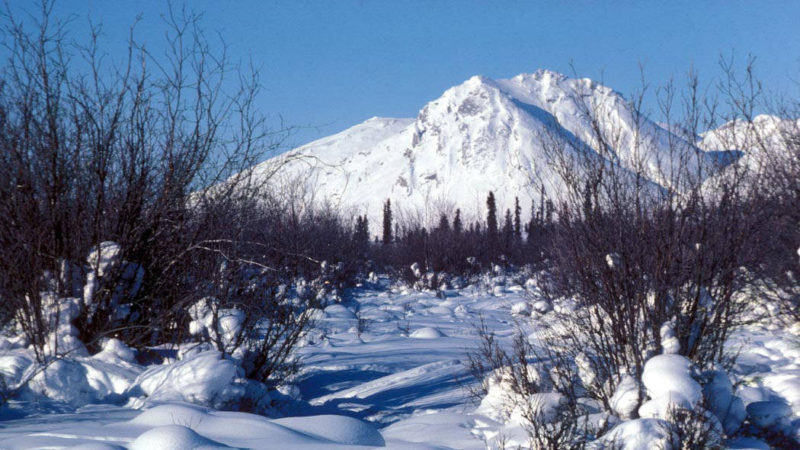 The Trump administration is sparing nothing in its effort to auction off leases in the Arctic National Wildlife Refuge before the January 20 inauguration. A week and a half after the election, while the president was busy trying to overturn the results, the Department of the Interior issued a call for oil-lease nominations, which allows companies to choose parcels of land to bid on. Then, on December 2, well before the 30-day nomination period had closed, Interior officials announced that a sale would take place just two weeks before Biden’s inauguration.

But a cloud of uncertainty looms over the entire effort to begin oil and gas extraction in the refuge. The Audubon Society, Center for Biological Diversity, Sierra Club, and the Gwich’in Steering Committee have filed lawsuits challenging the adequacy of the environmental review process. The incoming Biden administration has vowed to protect the refuge and could delay or possibly revoke any leases that are issued. Under pressure from the Sierra Club and other groups, major banks in the US, Canada, and Europe have pledged not to finance projects in the Arctic—an ecologically fragile region that is warming two to three times faster than the rest of the planet—including the wildlife refuge.

The biggest unknown, though, is whether the oil industry still has much interest in what would be a very costly and controversial effort to drill for oil in one of the last great wilderness areas in the United States. This isn’t just a matter of companies keeping quiet about their intentions: Because there’s so little publicly available data to evaluate the coastal plain’s resource potential, it’s unclear whether drilling in the refuge makes economic sense at all.

The only seismic surveys ever done in the refuge were carried out in the mid-1980s using technology that is now obsolete. The results of the lone test well drilled on refuge lands around the same time are a closely guarded secret, but a 2019 New York Times story suggested that they were disappointing. When the Trump administration placed Alaska at the center of its “energy dominance” agenda, it invested heavily in updating resource assessments of the entire North Slope region. In May 2017, then–interior secretary Ryan Zinke ordered the US Geological Survey to carry out new studies of the National Petroleum Reserve in Alaska (NPRA; located west of the existing petroleum hub of Prudhoe Bay) and the coastal plain of the Arctic Refuge.

“I’m a geologist,” Zinke said when he signed the secretarial order in Anchorage. “Science is a wonderful thing: It helps us understand what is going on deep below the surface of the earth. We need to use science to update our understanding of the … Arctic National Wildlife Refuge.”

First, Interior spent close to $1 million to have the original 2D seismic data of the refuge reprocessed, believing that a favorable assessment could increase interest in a lease sale, according to documents obtained through a Freedom of Information Act request. In addition to acquiring higher-resolution data, the USGS also carried out fieldwork in the refuge, sampling rock outcroppings and oil seeps in areas believed to have high hydrocarbon potential. By the end of Trump’s first year in office, the agency was poised to complete the first new assessment of the refuge’s coastal plain in over 20 years—research that would enhance the public’s understanding of the geology of the region and also provide industry with a better sense of where the most promising oil and gas reserves may lie.

But in early 2018, Interior officials abruptly canceled the coastal plain assessment. USGS has been sitting on the reprocessed seismic data ever since. Senior officials at Interior have refused to let USGS share the data with anyone—including the Bureau of Land Management, which is overseeing the leasing program and drafted the environmental impact statement.

This isn’t the first time that science has been sidelined or suppressed in the rush to open the refuge to drilling. During the environmental review process for seismic surveys of the refuge in 2018, the findings of career BLM officials were altered to minimize potential impacts to polar bears and Native communities. The US Fish and Wildlife Service, which manages the 19.3-million-acre refuge and whose scientists have studied it for decades, has been largely shut out of the review process.

Resource assessments have also been highly politicized under the Trump administration. In late 2017, the head of the USGS energy and minerals program resigned in protest after then–deputy secretary David Bernhard pressured the agency to turn over prepublication data from a forthcoming assessment of the NPRA, in violation of USGS fundamental science practices. When the assessment was released, DOI boasted that it showed a “HUGE increase” in oil and gas potential and that the “path to American energy dominance starts in Alaska.”

It’s impossible to know if the coastal plain assessment based on the reprocessed seismic data would have changed the outlook of the lease sale or the environmental impact statement itself. As part of the environmental review process, BLM comes up with “reasonably foreseeable” development scenarios that are based in part on USGS estimates. David Houseknecht, a senior USGS research geologist who heads up the Alaska program, said that the agency had analyzed about 50 percent of the data but that he was unable to comment on the findings.

“As a scientist, it’s quite frustrating,” he told Sierra. “We want to share what we know.”

Interior Department officials never explained to USGS employees why they canceled the coastal plain assessment, Houseknecht said. Officials never expressed an interest in seeing the data, and Houseknecht was even told at one point by a top political appointee not to share the information with the BLM. “The department is certainly aware that when we do updated assessments based on new or reprocessed information, there’s an equal probability that it [hydrocarbon potential] could go down just as well as it could go up or stay the same,” Houseknecht said.

Meanwhile, since 2017 USGS has worked feverishly to produce new resource assessments of geological formations across other areas of Alaska’s North Slope. According to Houseknecht, if USGS had been able to continue its work on the coastal plain assessment—which supposedly had been a top priority—it would have been published before the end of 2019, more than enough time for the findings to be incorporated into the final EIS. Instead, the new data remains under lock and key on the eve of the first-ever lease sale in the refuge.

Environmentalists also question why the assessment was not completed and wonder what the Trump Interior Department is hiding.

“The information could indicate if, and potentially where, there are oil reservoirs in the Arctic Refuge, and the EIS should have analyzed the wildlife and other impacts of the resulting oil development scenarios,” said Lois Epstein, arctic program director at the Wilderness Society.

The most recently published USGS assessment is more than 20 years old, published in 1998, and it estimated that the coastal plain contained anywhere between 4 and 11 billion barrels of technically recoverable oil. This was more favorable than previous estimates and also showed a profound change in the likely geographical distribution of the most promising deposits.

In the past couple of decades, reprocessing capabilities and the computing technology used to analyze seismic data have improved significantly. Taking a fresh look at older data has become a routine intermediate step in oil and gas exploration. In Alaska, where extreme conditions and environmental concerns pose obstacles for conducting new seismic surveys, it has become an increasingly attractive option.

“There are a lot of good reasons to work with older data besides just cost,” said Bill Enyart, who runs a seismic reprocessing firm in Colorado and has worked on projects in Alaska for decades. “In a 50,000-foot-view sense, it gives you a better idea of what the petroleum system looks like and which areas may be more prospective than others.”

This time around, USGS had the 2D data reprocessed by an outside contractor using more sophisticated technology. The agency also collected new rock samples from Angun Point, an oil-saturated outcropping on the coastal plain, and planned to conduct a new geochemical analysis of previous samples from an oil seep near the village of Kaktovik, the only Alaska Native settlement within the refuge.

Industry had expressed an interest in the new analysis and even helped to fill in some of the gaps in the original data. Houseknecht received inquiries from companies as far away as Australia asking if the new information would eventually be made available.

But not long after passage of the 2017 tax cuts and jobs act, which legally opened the refuge to exploration and development, USGS was told to stop its work on the coastal plain. The legislation allowed the possibility of conducting 3D seismic surveys of the refuge, and Interior pushed aggressively to permit surveys in winter 2018–19. But that application failed to adequately address concerns about potential harm to polar bears and has since been withdrawn. (A new application from a different company was submitted in August, and seismic surveys could still be approved by BLM for this winter.)

“We were never told why we were not supposed to complete the first assessment,” Houseknecht said.

Still, even without the updated assessment, the reprocessed seismic data could have been shared with BLM and incorporated into the final EIS. In a 2019 presentation before the American Association of Petroleum Geologists, Houseknecht noted that the results along with the new field data would “inform federal lease-sale preparation.” But that was never allowed to happen. In addition to nixing the assessment, high-ranking Interior officials instructed USGS not to share the data with any other agencies, including the BLM.

In spring 2019, BLM geologists from Anchorage were in Washington, DC, and requested a meeting with USGS to discuss their North Slope research. Joe Balash, then the assistant secretary for land and minerals management who was overseeing the refuge leasing program, tried to prevent the meeting from happening.

It was a highly unusual move, and after pushback from USGS, the meeting did take place. Houseknecht gave a broad overview of ongoing USGS research on the petroleum geology of the North Slope and briefed the BLM scientists on the reprocessed seismic data. But he did not provide them with a copy.

“What Balash did say to BLM and to USGS is ‘I do not want the reprocessed data going to BLM,’” Houseknecht said. Not long after, Balash left the department to become a top executive at an Australian oil and gas company active on the North Slope.

Interior Department officials did not respond to requests for comment; it remains unclear why Balash did not want the BLM or anyone else to have access to the USGS data. Perhaps he and other high-ranking Interior officials thought incorporating the new information would slow down the environmental review process and possibly delay a lease sale, which had initially been planned for 2019. It’s also possible they feared an updated assessment would show a decrease or at best no change in the coastal plain’s resource potential, dampening enthusiasm for an already controversial lease sale. Or they assumed the 3D seismic data would be available.

Whatever the case, critics of the leasing program say that the Trump administration has badly mishandled the environmental review process and that this is just one more example of taxpayer-funded science being suppressed to advance a pro-development agenda.

“The information should have been turned over to let BLM and the public consider it as part of the EIS process,” said Bridget Psarianos, an attorney with Trustees for Alaska. “The administration’s suppression of data and rush to hold a lease sale confirms what we’ve always known: They will cut all corners and stop at nothing to give away these public lands.”