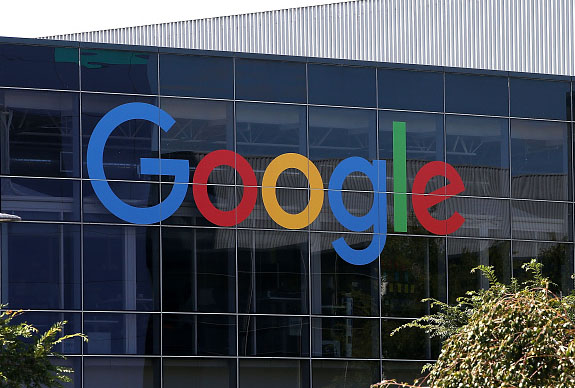 MOUNTAIN VIEW, CA - SEPTEMBER 02: The new Google logo is displayed at the Google headquarters on September 2, 2015 in Mountain View, California. Google has made the most dramatic change to their logo since 1999 and have replaced their signature serif font with a new typeface called Product Sans. Image: JUSTIN SULLIVAN/GETTY IMAGES

“Don’t be evil,” Google’s two founders, Larry Page and Sergey Brin, famously proclaimed in the manifesto they published just before their company went public, in 2004. Avoiding evil suggested a pretty low bar, but the vow itself — along with the founders’ boast that “our business practices are beyond reproach” — was an invitation to find contrary examples. There have been plenty of nominations, including the announcement, in 2012, that Google would track its customers’ Gmail missives, Web searches, and YouTube usage, which had the effect of helping advertisers target potential customers. (One headline proclaimed, “Google’s Broken Promise: The End of ‘Don’t Be Evil.’ ”)

Google still scans e-mail and tracks Web searches. This is, in fact, its business model — your Gmail account and search cost no money; you pay for it by letting people advertise to you based on keywords used in searches and e-mails. Among the company’s more profitable advertisers over the years have been payday lenders, those outfits that make short-term loans — often for a period of just two weeks — at exceedingly high interest rates, usually to people so desperate for quick cash that they agree to scurrilous terms and so poor that they are unable to pay back the loan when it comes due.

Borrowers end up paying endless interest on a loan that never goes away. The typical online lender charges an annual percentage interest rate of roughly six hundred and fifty per cent, according to a 2014 study by the Pew Charitable Trusts. That same study, titled “Fraud and Abuse Online: Harmful Practices in Internet Payday Lending,” found that one in three customers said they caught a lender making an unauthorized withdrawal from their account. Not surprisingly, ninety per cent of the complaints about payday lenders to the Better Business Bureau were about online lenders.

Google’s codependent role in the rise of the online payday-lending industry arguably put it squarely at odds with its lofty view of itself. And last week, Google tacitly acknowledged this when it announced it would no longer sell ads to payday lenders. “Financial services is an area we look at very closely because we want to protect users from deceptive or harmful financial products,” Google’s David Graff said. As director of Google’s global product policy, Graff announced what he described as “an update to our AdWords policy.” (The company already refuses to sell ads to peddlers of counterfeit goods, illegal drugs, weapons, and “products or services that enable dishonest behavior.”) People will still be able to use the Google search engine to find an online payday lender if that’s their intention. But starting on July 13th, the company won’t sell search terms to any company making a loan due in sixty days or less. In the US, the company is banning ads from any lender charging interest rates higher than thirty-six per cent per year, no matter what the duration of the loan. “This change is designed to protect our users from deceptive or harmful financial products,” Graff wrote.

Graff did not address the role the company had played as a reliable lead generator for the globe’s most aggressive online lenders, allowing them to purchase search terms (“credit counselors,” say, or “late payments”) to lure potential customers to their sites. Google even got into the online payday business itself when, in 2012, the company’s venture-capital arm, Google Ventures, bought a piece of LendUp. This startup had Silicon Valley credibility — one co-founder had worked at Yahoo and Zynga, and its investors include two of the Valley’s more luminous venture capital firms, Kleiner Perkins Caufield & Byers and Andreessen Horowitz. It promised to disrupt the payday industry by setting borrowers with poor credit on a better path. And yet according to the LendUp Web site, the annualized percentage rate on its two-week, two-hundred-dollar starter loan is three hundred and ninety-six per cent. That puts Google in the awkward position of refusing to do business with a company partially owned by Google Ventures, now called GV, which is part of Alphabet, the holding company Google created, in 2015, to contain its various subsidiaries. (Alphabet passed on the “don’t be evil” slogan in favor of “do the right thing.”)

Google’s decision to drop ads from payday lenders will cost the company easy money. Google makes money by charging for the clicks on ads that come up when you search for a particular term. Gathering data for its 2014 report, Pew purchased data from several Web analytics firms and discovered that terms related to payday lending cost between $4.91 and $12.77 per click. That means an online lender was probably paying Google more than five dollars for every person who clicked through to one of its ads. Sean Murray, the founder of a financial-services information Web site called deBanked, said that the category of “loans” — which includes payday but also car and home loans — is Google’s second-most profitable category of search. “Payday loans were one of Google’s more expensive ad-word searches,” Nick Bourke, who directs Pew’s small-dollar loans project, said. The only search term he remembers being more expensive than “payday loans” was “bankruptcy” — which online payday lenders also commonly bought in search of customers who might just be desperate enough to agree to their loan terms.

Google’s decision came a few weeks before the Consumer Financial Protection Bureau is expected to release new rules on payday lenders. That industry now makes around forty-five billion dollars in loans each year in just the United States, with online loans accounting for nearly forty per cent of loan volume and nearly half the $8.7 billion in fees. Richard Cordray, the director of the C.F.P.B., left little question about where he stands on the issue when, in March of last year, his agency announced it would consider stricter regulations “toward ending the debt traps that plague millions of consumers across the country.” While Google is not offering loans, its position as a platform, or middleman, could leave it vulnerable, according to deBanked’s Sean Murray. In a blog post, Murray wrote about a suit brought by the C.F.P.B. against a lead-generation firm. The bureau acknowledged that the firm was just a middleman but faulted it for failing to properly vet sites to which it sent potential customers. Google might be vulnerable to the same charge, and might have been eager to rid itself of payday lenders before new rules came out.

Consumer groups generally accentuated the positive when reacting to Google’s announcement. The Center for Responsible Lending’s Keith Corbett, for instance, called Google’s announcement a “pivotal development” for fairness in financial services. Yet maybe the strongest endorsement of the significance of the search giant’s decision came from Lisa McGreevy, the president and C.E.O. of the Online Lenders Alliance. “This unprecedented abuse of power by a monopoly player should concern lawmakers at both the state and federal levels,” McGreevy said. “It’s disappointing that a site created to help give users full access to information is making arbitrary choices on the advertisements users are allowed to see from legal businesses.” Evil, it seems, is in the eye of the beholder.

This story was reported in partnership with The Investigative Fund at The Nation Institute, now known as Type Investigations, where Gary Rivlin is a reporting fellow.