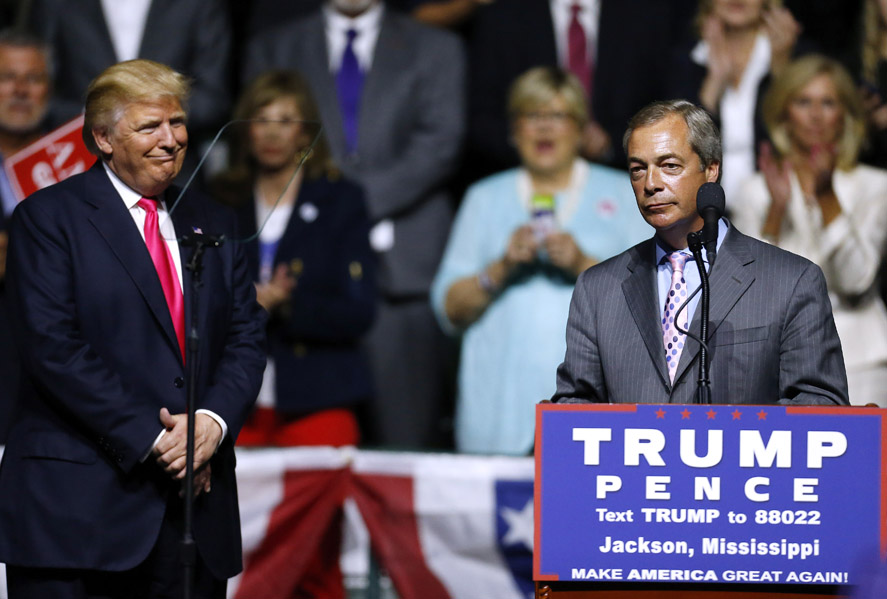 Last night, Donald Trump took his “America First” message global. Appearing at a rally in Mississippi alongside British Member of European Parliament Nigel Farage, the architect of the United Kingdom’s exit from the European Union, the GOP nominee sought to re-energize his struggling campaign by hitching his star to Europe’s resurgent right-wing populism. “On June 23, the people of Britain voted to declare their independence,” Trump said, “which is what we are going to do also, folks.”

On a conservative Mississippi talk radio show earlier in the day, Farage compared himself to Trump, touting how he had won the Brexit vote against all predictions by the political establishment — despite being accused of xenophobia and “neo-nazism…There are huge similarities between what made Brexit happen and what can help Trump to win,” said Farage, the former leader of the anti-immigration UK Independence Party. “The same thing can happen here.” At the evening rally, Farage added, “If I was an American citizen, I wouldn’t vote for Hillary Clinton if you paid me.”

Trump’s appearance alongside Farage is the latest example of his campaign making common cause with ethno-nationalist political parties across the Atlantic. In June, Trump, while in Scotland to promote his golf resort there, proclaimed Brexit “a great thing,” and his affinity with Europe’s far-right runs deeper than their mutual dislike of the European Union. Farage shares Trump’s penchant for racially charged rhetoric, such as when he told an interviewer he would feel “concerned” if a group of Romanian men moved next door but suggested that he would have no problem if they were Germans. Trump has received glowing endorsements from many of continental Europe’s most controversial nativists and xenophobes — politicians championed by some of Trump’s most prominent supporters.

Among Trump’s fans across the pond are National Front founder Jean-Marie Le Pen, whom has been fined in France for “inciting racial hatred;” Dutch Party for Freedom founder Geert Wilders, who has likened the Koran to Mein Kampf; and far-right Belgian politician Filip Dewinter, who spoke on the “Islamization of Europe” at the May conference of American Renaissance, a white nationalist group. Far-right leaders in Russia, the Czech Republic, Serbia, Slovenia, Sweden, Italy, and Greece have also endorsed or praised Trump. Golden Dawn, the ultra-right-wing Greek nationalist party, made a pro-Trump video starring neo-Nazis. The Trump campaign has not publicly disavowed any of these endorsements.

Trump has at times rubbed shoulders with some of his controversial European supporters. In April, leading Italian right-wing politician Matteo Salvini, who has praised the “good work” of fascist Italian dictator Benito Mussolini, tweeted a photo of himself posing with the candidate at a Trump campaign rally. Farage and Wilders, the Dutch nationalist, traveled to Cleveland in July to attend the Republican National Convention’s Trumpalooza.

Wilders, who has called for outlawing the Koran and taxing Hijab-wearing Muslims, was called “a friend to freedom” by Breitbart News editor and self-described “Trump surrogate” Milo Yiannopoulos at a party he hosted during the RNC. “He is the hope for Western civilization.”

“I’m not American, but don’t blame me if I say I hope that Donald J. Trump will win the election in November!” Wilders responded. He went on to decry the influence of Islam in the Western world, before concluding, “for everyone that might have some doubts, we shall win, we must win, and we will win this war.”

Stephen Bannon, Trump’s new campaign director, has been a champion of European ethno-nationalists. In 2014, Bannon, then the publisher of Breitbart News, announced the launch of Breitbart London, a vertical dedicated to supporting a European version of the tea party. It quickly emerged as one of the most vocal champions of Brexit; Farage has written dozens of op-eds for the site. Last month, after Farage resigned as the leader of the UK Independence Party, Breitbart London editor-in-chief Raheem Kassam (and Farage’s former chief of staff) told the BBC he was considering a bid for the party’s leadership.

Under Bannon’s direction, Breitbart News has written hundreds of fawning stories about ethno-nationalist leaders. “I have a political crush, but one I couldn’t vote for today, because she ran for office in France,” Trump surrogate Sarah Palin wrote on Breitbart News in December. “Marion Marechal-Le Pen is the new deserved ‘It Girl’ of French politics.” Marechal-Le Pen is the granddaughter of Jean-Marie Le Pen and a member of his right-wing National Front. Since early last year, Breitbart News has published 75 stories about the Le Pens.

The flirtation with European ethno-nationalists by Trump and his preferred media outlet may help to legitimize their nationalism in the eyes of voters by casting it as part of a global revolt against elites. And by reinforcing the similarities between his campaign and Brexit, Trump gives his supporters hope that, as Brexit proponents did in the United Kingdom, he can overcome a seemingly insurmountable disadvantage in the polls.

Farage drove home that very point during his morning radio interview on SuperTalk Mississippi, contending that voters in the United Kingdom are secretly appalled at how their country has been overrun with foreigners. He spoke of his own shock at riding trains where none of the passengers spoke English. “There was an unease about this that had been building up,” he told host JT Williamson. “For years, people said to me, ‘Nigel, I listened to what you’ve got to say. I think you’re right, but I dare not tell anybody because they might think I am some awful, dreadful person.’ And what the Brexit vote did was give people an opportunity to express that.”

Williamson shot back appreciatively: “The similarities between that and Donald Trump are just amazing.”

This article was reported in partnership with The Investigative Fund at the Nation Institute. Additional reporting was done by Sarah Posner, Kalen Goodluck, and Jaime Longoria.

Josh Harkinson is a senior reporter at Mother Jones in San Francisco covering tech, labor, drug policy, and the environment.