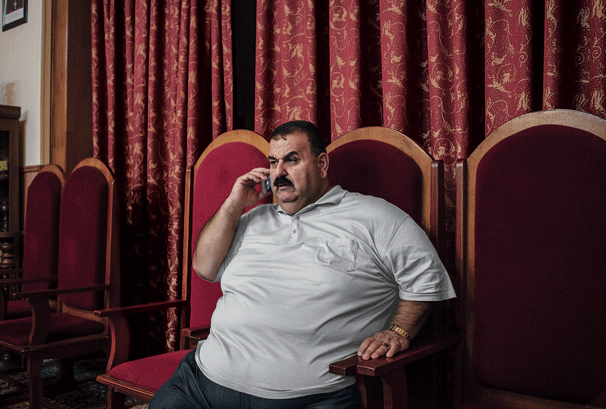 Emad Matti inside a church in Kirkuk. Image: HARPER'S MAGAZINE

Emad Matti had not received a photograph of the hostages. Two months had passed, and several Iraqi Christian families that had been detained by the Islamic State in an old folks’ home in Mosul were still imprisoned. From Kirkuk, Matti had been transferring $500 each month to a bank to feed the families, and he was afraid that they were dead, or that his informant in Mosul, one of their captors, was planning to prolong their imprisonment and collect even more money before demanding an impossible sum to drop them at the Kurdish border. For now, though, Matti just wanted photographic proof that they were still alive.

He checked his watch, a gold Breitling made from the weapons of martyrs in the Iran–Iraq War. The phone rang. He put a finger to his lips.

“It’s the Islamic State.” He greeted his informant and put him on speakerphone so I could listen. “Okay, Abu Haydar. What happened to the pictures of the women and children?”

“I was there yesterday with Abu Hamid. Believe me, they are under high supervision but with Allah’s will I will send you pictures of them.”

“I will be very grateful, Abu Haydar.”

“You don’t have to thank me, it’s my duty. I give you my word and I keep my word, otherwise I will be responsible in front of Allah and in front of you.”

“I know you keep your promises. What you are doing is a very good deed.”

“And you too, this will be my promise to you, no one will touch them.”

“May God protect your head.”

Matti, like the families he was trying to rescue, was a Christian. At fifty, he weighed more than 400 pounds, the result of a hormone disorder. His stomach, which was as wide as a hula hoop, pushed his legs apart when he sat. His pink feet swelled beneath the straps of his sports sandals and his watch fit as tight as a rubber band. Once, he’d flown to Amman, Jordan, to have fat surgically removed. It quickly grew back. He suffered from circulation problems; rolling up his pant leg, he showed me his purpled calves and skin that had turned black around his knee.

Three days later, from his office in a church in Kirkuk, Matti tried calling Abu Haydar for another update. Abu Haydar’s wife answered the phone.

“I don’t like these new Daeshis,” he said, using an Arabic term for Islamic State fighters. “I miss Abu Yaqin. He was such a helpful Daeshi.”

We were talking with Hormuz, a Christian man whom Matti had recently helped free. “I remember Abu Yaqin,” Hormuz said, twisting his hands nervously as though he were trying to wash something off them. “He was a short man with a beard and no mustache. A very nice Daeshi.” Hormuz looked up at me. “You don’t believe me? There are eight million people under the rule of Daesh. Certainly you can find good people there.”

Matti agreed. “You know,” he said, “most Daesh keep promises.”

Since the rise of the Islamic State in 2014, many Iraqi citizens had come to treat the militant group as they would any local government. Matti, like everyone else, had adapted. Plus the political affiliations of those he worked with were often less coherent or fixed than they might seem to the outside observer. Two or three of Matti’s sources in Mosul, a city around 100 miles northwest of Kirkuk, were Arabs employed by the caliphate. “They’re definitely Daesh, but I cannot say they are with Daesh because I’ll be accused of working with terrorists.” He also had informants on the ground in Kirkuk. “But these people aren’t participating in terrorist activities,” he explained. “And even if you torture me or kill me, I won’t give up their identities.”

When Matti invited me on a tour of the neighborhood, I asked about security. “The message has already been passed to ISIS that you’re here,” he said. “But don’t worry. I guarantee I could bring even you in and out of the Islamic State.” […]

Read the rest of this article in the November 2016 issue of Harper’s Magazine.

Jennifer Percy is a National Magazine Award-winning journalist and a contributing writer at the New York Times Magazine.