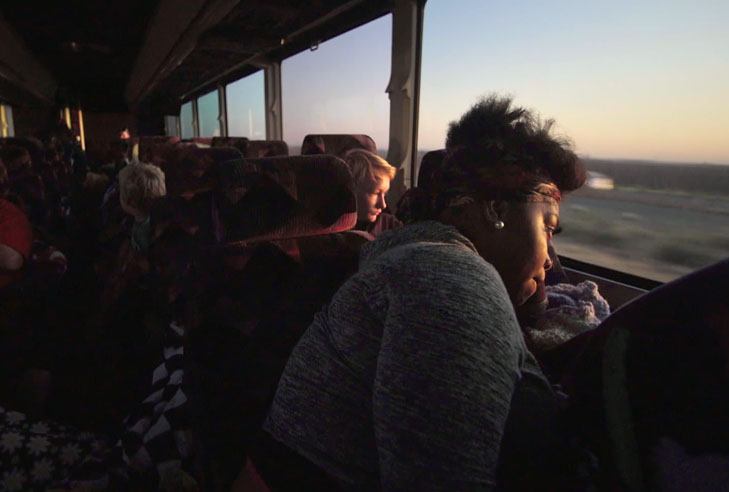 Here in the United States, 7 percent of the country’s children have experienced parental incarceration, whether in prisons or jails. An estimated 2.7 million U.S. children currently have a parent behind bars. That means 1 in every 28 children — at least one in every public school classroom — has an incarcerated parent, up from 1 in 125 children just over 30 years ago. Among black children, the rates are even higher: 1 in 9 have a parent in prison. In California alone, as of 2000, an estimated 292,000 children had a parent in prison or jail.

More and more of these incarcerated parents are mothers. In the last 30 years, the number of women in prison has increased by over 500 percent. As of 2010, there were an estimated 120,000 incarcerated mothers of children under the age of 18.

Mother’s Day tells the story of an annual overnight bus program, called Get On The Bus, that takes children from across California to visit their incarcerated parents in prison. The journeys can be as long as ten hours each way, just to afford children about five hours to spend with their mother or father in prison. These trips are organized by the non-profit Center for Restorative Justice Works. They are one of the few opportunities during the year that many of these children have to see their parents.

Many large California prisons are located in remote rural areas, far away from populous urban centers. This logistical barrier to maintaining family ties, and its emotional impact on children, is too often overlooked. The distance to these prisons can pose an insurmountable obstacle for low-income families who are unable to afford the time off work or the resources to visit their incarcerated loved ones. Many children end up relying on programs like Get On The Bus in order to see their parents even once a year.

This film was shot over the span of many overnight bus rides to various California prisons in the weekends leading up to Mother’s Day and Father’s Day 2016.

An entire generation is coming of age without their mothers or fathers because of our nation’s drive to incarcerate. The incarceration epidemic in the United States is not just today’s problem — it’s a disaster that stretches across generations.

This project was produced through the Documentary Film Fellowship of The Investigative Fund at The Nation Institute, now known as Type Investigations, a pilot program launched with the support of JustFilms at The Ford Foundation, in partnership with the New York Times’ Op-Docs. The film premiered at the 2017 Tribeca Film Festival.

Elizabeth Lo is a Los Angeles–based documentary filmmaker whose work has been showcased around the world.