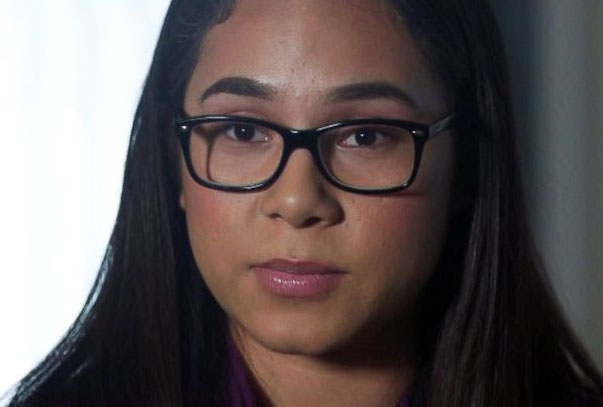 ABC NEWS
Jahveel Ocampo is one of hundreds of young people to file a formal complaint of mistreatment by border agents.

In December of 2009, 15-year old high school student Jahveel Ocampo, her boyfriend and a few of his family members decided to drive east from Encinitas, California, up into the mountains to see the first big snowfall of winter.

They pulled over to a rest stop to use the bathroom and were suddenly blocked by an unmarked truck. A man in a dark blue jacket shouted from the vehicle, Ocampo would say later, directing her and her boyfriend to get out of the car with their hands up.

Ocampo says she had no idea what was happening — until the man asked her where she was born. When she replied, “Tijuana,” she says the man demanded to know whether she was an “illegal.”

He slapped handcuffs on her and her boyfriend and within minutes they were surrounded by several Border Patrol vehicles. Ocampo was separated from her boyfriend, loaded into the back of a car and driven away.

She was taken to a Border Patrol station in Campo, California, about 50 miles east of San Diego. In a complaint filed with the agency in January 2010 and an interview with ABC News this past March, Ocampo describes in detail the harrowing experiences she says awaited her there.

She says she was threatened with sexual abuse by border agents while in custody, part of what the ACLU says is a pattern of misconduct by Customs and Border Protection officials aimed at minors that has largely gone unnoticed and unpunished.

“It's really a horror show,” said Mitra Ebadolahi, an attorney for the ACLU's border program, who has been investigating these complaints. “It's a story of egregious abuse of children who are vulnerable.”

Ocampo says an agent in a blue jacket ordering her to enter a cell and slapping her twice on the buttocks. That agent, joined by another male agent, then took Ocampo to another room, where the pair began to interrogate her.

They told her she had been “snitched out” by her boyfriend, that he claimed they were going to “smuggle drugs,” and that she needed to admit she was in the area for a drug pickup. She said she was confused. She told them they were just going up to see the snow — “clearly, I was wearing a big jacket,” she said in an interview, “clothes that you would normally wear to go to snow” — and began to cry.

Ocampo had come to the country as a young child and was raised in Southern California by undocumented parents. She was now the mother of a 1-year-old child and said she had obtained a temporary visa, which had expired. The agents seemed to know all of that already and began pressing her about her immigration status. She pleaded with them to let her call her mother. The agents refused. They told her, “Nobody's going to come over here and save you.”

They handed her a document and told her she had to sign it. It was an order of voluntary departure — a deportation order. Ocampo says they told her the only way she would see her mother again was to sign it. This time, it was Ocampo who refused.

That's when, she says, they threatened her. One officer said, in Spanish, “Right now, we are going to close this door and we are going to rape you and f*** you.” One of them then said, according to the report, “If you cooperate with us, we can deport you to Mexico. Otherwise we will take you to jail and deport your entire family.” Her child, they said, would end up in foster care.

Ocampo isn't the only young person to share a story of abuse encountered at the border. As the number of unaccompanied minors arriving from Mexico and Central America has increased, minors have lodged hundreds of formal complaints containing detailed claims of mistreatment by border agents.

In December 2014, the ACLU requested the full investigative files on complaints filed by minors “in order to shed light on longstanding allegations of abusive treatment of children by Border Patrol.” A year ago, after filing suit, the ACLU began to receive thousands of pages of documents from the case files of 408 complaints filed from early 2009 through mid-2015, which Ebadolahi shared exclusively with ABC News and The Investigative Fund, leading to a previous ABC News report on the agency that aired on 20/20 in July.

An analysis of the documents identified several other incidents where detainees allege they were threatened with violence if they refused to pay a bribe, if they refused to answer agents' questions, if they lied, if they did not behave, if they moved. There were also hundreds of allegations that appear to constitute clear violations of Border Patrol protocols:

• 13 allegations of sexual harassment or assault, including allegations of agents groping minors' thighs or genitals or making sexual remarks and threats

• 97 allegations of physical abuse, including allegations of Border Patrol agents punching, kicking, and intentionally running over minors during apprehension

• 201 allegations of poor conditions such as cold temperatures, provision of spoiled food, and failure to provide potable water

No files contain any indication that an agent was reprimanded or fired as a result of the complaint.

“It's an agency that seems to believe that it's above the law,” Ebadolahi said. “Not a single [case] has been prosecuted.”

In response to questions about Ocampo's case, a CBP spokesperson issued a statement, saying, “An investigation conducted into the complainant's allegations revealed no evidence of inappropriate or threatening behavior by CBP personnel. CBP takes all allegations of mistreatment seriously, and does not tolerate actions that are not consistent with our core values of Vigilance, Service to Country and Integrity.”

An October 2015 document, “National Standards on Transport, Escort, Detention, and Search,” lays out detailed CBP protocols and standards when it comes to the treatment of minors and other migrants in detention.

It limits detention to 72 hours, requires the provision of timely medical care, comfortable temperatures, bathroom access and adequate nutrition. It spells out a “zero tolerance policy prohibiting all forms of sexual abuse.” And it prohibits agents from engaging in verbal abuse: “CBP employees must treat all individuals with dignity and respect,” it reads, “perform their duties in a nondiscriminatory manner,” and “speak and act with the utmost integrity and professionalism.”

Many of the complaints contain far more troubling allegations, such as this sample from a single three-month period in 2014:

• In a May 2014 complaint, a 16-year-old boy alleges that he was strip searched and verbally abused at a facility in Brownsville, Texas. An agent accused him of lying about his date of birth and threatened that if he did not tell the truth about his age he would become the sexual property of other detainees.

• In another May 2014 complaint, a 13-year-old girl held in a facility in Hidalgo, Texas, alleges that she was “verbally abused” and, despite recent surgery to remove an ovarian cyst, denied pain medication, denied sanitary napkins, and left in a cell with blood-stained pants.

• A June 2014 complaint alleges “serious verbal abuse, threats, and possible torture” of an unaccompanied minor who was held at a facility in Brownsville, Texas, while five months pregnant. Agents believed “she was lying” when she complained of pain, delaying by a day her transfer to a hospital, where she had a miscarriage.

• Another June 2014 complaint alleges that agents at the Otay Mesa port of entry in California “mocked” and “abused” a 15-year-old girl. She alleged that “when they searched her, they forced her legs apart and touched her private parts so hard she screamed.”

• A July 2014 complaint, filed by a 9-year-old child, alleges that an agent in a facility in Brownsville, Texas, called her and the other children “dogs” and other “ugly things,” banged on their cell door at night to interrupt their sleep, and laughed as he slammed the cell door open onto the detainees, injuring a young girl and declining to offer her care for her bleeding arm.

“The volume of the allegations, the consistencies across the allegations, is really deeply troubling for anyone who cares about the welfare of children and professionalism of our government officers,” said Ebadolahi “Imagine where you have serious allegations of sexual misconduct or physical abuse, saying, 'I don't remember that happening.' 'Okay, it didn't happen.'”

James Tomsheck, who served as assistant commissioner for Internal Affairs at CBP during the Obama administration, said the widespread allegations of abuse are a direct result of a failure of accountability.

“Throughout my eight years in the organization, there were consistently problems with discipline …[and] how much discipline employees received for misconduct,” Tomsheck said. “The vast majority of CBP officers and Border Patrol agents execute the mission with high integrity and with appropriate restraint … [but] there's a serious problem with discipline in the agency that enhances the idea that you are unlikely to be held accountable for misconduct, subsequently resulting in an increased amount of misconduct.”

After signing the deportation order, Ocampo spent the night crying in the Campo Border Patrol station.

“I was really scared at the moment,” she said. “You're alone in a room with two men where…they can see inside but you can't see outside. So any moment somebody could've grabbed me, done something to me. I could've been screaming, yelling — nobody was gonna come.”

Ocampo was moved that evening to a shelter for unaccompanied minors in San Ysidro, Calfornia. She was eventually able to get a visa extension and, at 22, is married to a U.S. military serviceman. She is now attending college.

Her 2010 complaint regarding her allegations of threats and verbal abuse was investigated by the office of Civil Rights and Civil Liberties at the Department of Homeland Security. The investigators claim that Ocampo was “disrespectful and uncooperative” during processing and that she “was not mistreated, verbally abused, or intimidated.”

A final letter from that office in the file indicates that CBP researched documents and records, and obtained information from Border Patrol agents and a supervisor, and concluded that “agents acted in a manner consistent with policy and regulation.” CBP was “unable” to find any witness or record to support her complaint.

There is no indication that Ocampo herself, or any of those she was detained with, was ever interviewed.

This project was conducted in partnership with The Investigative Fund, now known as Type Investigations, where three-time Emmy Award-winning journalist John Carlos Frey was a fellow specializing in coverage of the U.S.-Mexico border. The Investigative Fund's Summer Concepción and ABC News' Pete Madden contributed to this report.

Brian Epstein is an Emmy award winning producer and journalist at ABC News.