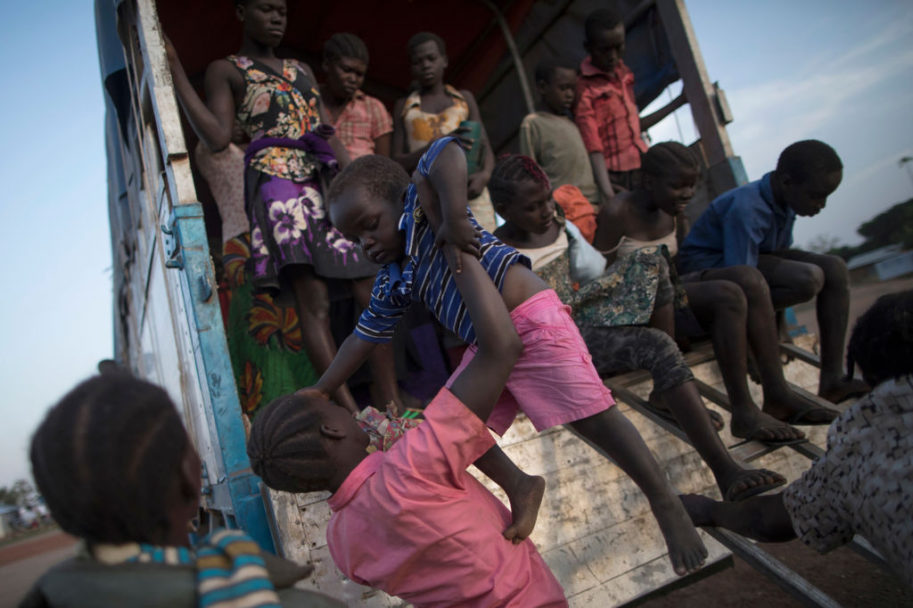 South Sudanese refugee families disembark a bus at the Kuluba Collection Point in Uganda after being brought from the border on February 24, 2017. Image: Dan Kitwood/Getty Images

Guo’s husband was killed by government troops in November 2016. In January, South Sudanese forces attacked Limi again, killing at least 10 civilians, she and other survivors told me. That’s why she fled and walked for a week and a half to find safety in neighboring Uganda.

Seated in the blazing sun of a marketplace turned refugee collection point in the Ugandan town of Afoji, Guo told Teen Vogue about the massacre. She introduced me to her three grandchildren — a five-year-old boy, a seven-year-old girl, and a teenage boy. It took me a while to decipher that none of them were related by blood. Instead, the blood spilled in this ethnic cleansing campaign is what binds them together. Guo found each of them frightened, alone, and, like her, hiding in the wilderness amid a wave of government attacks on civilians sweeping through the deep south of South Sudan. “When I saw them, how could I leave them?” she says. “They were scared and hurting. They needed help.” Guo told them that she would be their grandmother and care for them and when she dies, they will bury her.

The civil war in South Sudan has taken a heavy toll on children and teens. The war began in December 2013 after government troops — known as the Sudan People’s Liberation Army or SPLA — loyal to President Salva Kiir, a member of the Dinka ethnic group, massacred ethnic Nuers in the capital, Juba. Soon after, rebel forces loyal to Riek Machar, a Nuer who is Kiir’s former vice president, massacred Dinka civilians in response. By 2015, war had come to the Equatoria region, in the southern part of the country, as locals resisted government land grabs and abuses by the SPLA. By the beginning of 2017, the violence had blossomed into a full-scale government ethnic cleansing campaign against groups including the Madi, Kakwa, and the Kuku, Salina Guo’s people.

No one knows how many South Sudanese people have been killed since the outbreak of the civil war. Estimates range from tens to hundreds of thousands. Speaking with more than 250 refugees and internally displaced people earlier this year, multiple eyewitnesses described attacks by SPLA forces on 26 Equatorian villages, resulting in no fewer than 141 deaths. Recent reports on the region from Amnesty International and Human Rights Watch catalog still more attacks and civilian deaths. The government of South Sudan rejects allegations it is carrying out an ethnic cleansing campaign and claims any civilians killed are collateral damage and victims of crossfire between government troops and rebel forces.

South Sudan was an American experiment in nation-building, the recipient of about $11 billion in U.S. assistance since 2005 — perhaps the largest investment the United States has made in sub-Saharan Africa. Washington, along with other international partners, mentored South Sudanese officials and trained the new nation’s military, but some say diplomatic failures by the Obama administration have been compounded by the Trump administration, which eliminated the special envoy for South Sudan and has done little beyond tough talk about a need to end the violence and the imposition of limited sanctions. Recently, the U.S. ambassador to the U.N., Nikki Haley, visited South Sudan as part of a three-country trip to Africa. She met with President Kiir and issued vague warnings. “I told him that we need to see him right the ship,” Haley said. During her visit, Haley was evacuated from a U.N. camp for displaced people when a demonstration against Kiir turned volatile.

“South Sudanese children suffer from…violence, displacement, lack of schooling, and forced recruitment by armed groups. Children have also at times been directly targeted by armed forces, often because of their ethnic group,” Jehanne Henry, a senior researcher in Human Rights Watch’s Africa Division, tells Teen Vogue. “Some have been arrested and held for prolonged periods of time and others have been killed or badly injured. For many trapped in the limbo of displaced [camps] or refugee camps for several years, the future looks bleak.”

In August, UNHCR, the United Nations Refugee Agency, chose 14-year-old Tabu Sunday as the symbolic 1 millionth South Sudanese seeking refuge in Uganda since last July. “Where I was living, they were killing people,” she told the U.N. “My parents said they didn’t have enough money for travelling. So we had to walk on foot with my aunt.” Sunday’s aunt stayed for only one week before heading back to South Sudan, leaving the teen, her twin sister, and their 11-year-old brother to fend for themselves. Taken in by another refugee family, they all live in the Imvepi refugee settlement, which is now home to more than 123,000 South Sudanese.

About 85% of those who fled to Uganda are women and children. Sunday and her siblings, like Guo and her three adopted grandchildren, are among the nearly 4 million people, in total, uprooted by this war.

According to the U.N.’s children’s agency, UNICEF, more than 1 million South Sudanese children are malnourished — 270,000 of them so severely that they are at risk of dying from hunger. The agency also estimates that 900,000 South Sudanese children are in need of psychological assistance. They and so many of their brothers and sisters have seen, if not experienced firsthand, shocking brutality — shootings and machete killings, gang rapes and sexual torture, assaults and village burnings.

Jane Mandera spoke with Teen Vogue earlier this year while cradling her eight-month-old baby in the midday heat of the Pagirinya refugee camp in Adjumani, Uganda. She says she and her husband, Nelson, both ethnic Madis, were traveling by road toward Uganda with a group of women and children when soldiers sprung what she called an “ambush.” They took her husband, the only man present, away and told her to wait with the others. When the soldiers returned they directed her to find Nelson and pointed the way. The entire group of women and children set off and found him lying in the brush, “slaughtered,” his throat having been slit. The corpses of about nine other men, Mandera says, lay in the same area. Her 11-year-old girl and 5-year-old boy witnessed the scene.

“Many children in South Sudan, though formidable in their resilience, have now experienced war, witnessed violence, and/or lost a loved one,” Tim Irwin, a UNICEF spokesman, tells Teen Vogue. “Their childhoods have been interrupted, which could have long-term negative consequences on the child’s emotional, cognitive, and social development.”

In the tri-border region where the Democratic Republic of the Congo, Uganda, and South Sudan meet, a group of children and teens, all ethnic Kakwas, sat beneath a large tree. After walking for days to reach safety, they looked physically and mentally exhausted. At first, the older teens mumbled only about “difficulties” in South Sudan but later opened up, recounting killings, beatings, and other atrocities. “The SPLA came on Sunday in the morning and began shooting all around,” one teenage girl tells Teen Vogue. “People ran into the bush and made their way here.” A younger boy spoke up. “When your brother is taken, you know that you will be next…” he says.

“Children in the Equatorias, which previously was a peaceful region, are experiencing physical harm, witnessing violence, and are at risk of exploitation,” UNICEF’s Irwin says. “As with children across the country, many are hungry and living with fear and loss.” Since the beginning of the civil war, almost 16,000 unaccompanied, separated, and missing South Sudanese children have been registered for family tracing services, according to Irwin. Less than one-third have been reunited with their families.

In the sun-blasted wastes of the Palorinya refugee settlement in Uganda’s Moyo District, Natani Hamid, an 18-year-old refugee who had spent more than a week with a group of four families “footing” through the bush, spoke with Teen Vogue. “You cannot use the main road,” he explains. “Soldiers will take your property. They will rape women. Men, they will kill or take away.”

Hamid told me that he feared both the rebels and the government troops. The former forced young men like him to leave their school in the town of Rokon and become fighters living in the bush. The government forces were even worse. “The SPLA came in the night to attack our school. They took some of the students and our teacher was killed,” he says.

There are approximately 18,000 children serving in armed groups as part of the war in South Sudan, according to Irwin. Some are forcibly impressed into service, others join the ranks of armed groups as a survival strategy to gain protection from other forces or, simply, for food.

Back in 2015, I interviewed a number of veterans of a militia known as the Cobra Faction. All had served for two or three years, all had been demobilized a few weeks before, and almost all had joined after their villages, near the town of Pibor, were attacked by the SPLA. None of the boys was older than 16.

Mary Poni, another survivor of the recent massacre in Limi village, tells Teen Vogue that she saw eight people killed by SPLA troops. “There was no one to bury those people. All of us just began to run,” she says.

Poni has two sons, both of them young men. In the chaos, they fled with her husband and had, she heard, made it to one of the refugee camps in Uganda. She hoped to join them soon. Next to her, a young girl sat silently, staring off into space. Poni explained that the girl was her sister’s child — a 12-year-old, who she found in the bush outside the village following the massacre. Her parents were among the eight dead that Poni had mentioned, and says that the girl saw them killed.

The girl opened her mouth as if to speak, but she made no sound. It seemed to be contagious and we all went silent for a few moments. Poni glanced at the girl expectantly, then herself looked away. As quickly as her niece’s demeanor had changed, it reverted back, all evidence of emotion draining from her face. The young orphan turned her head, her eyes glazing over. She resumed her far-off gaze, her eyes empty again. “This,” Poni says, “is how she has been.”

For this piece, journalist Nick Turse traveled to report on the ongoing war and subsequent famine in South Sudan that has left over one million children malnourished. This article was reported in partnership with the Investigative Fund at the Nation Institute.