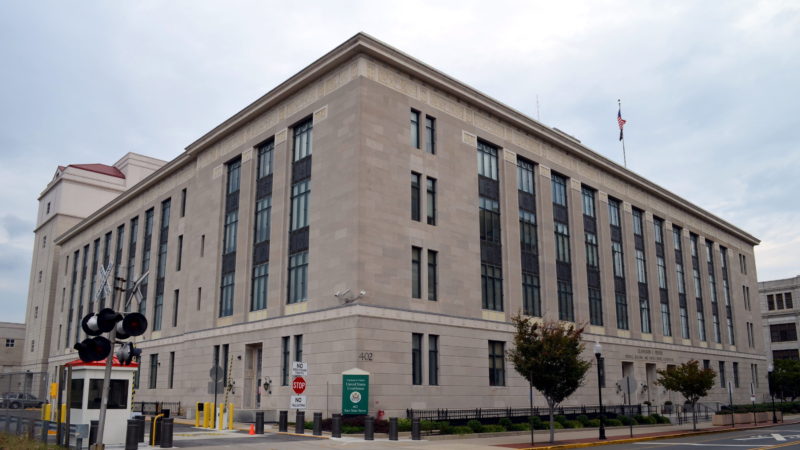 The Clarkson S. Fisher Building and US Courthouse in Trenton, NJ, where the lawsuit was filed. Image: Niagara / Wikimedia Commons

Over the past two years, some senior officials at the Securities and Exchange Commission have indicated that they would be open to corporations foisting mandatory arbitration on their shareholders, and now a team of pro-corporate players are ready to put them to the test. Two lawyers have joined with a high-profile Harvard professor on a pivotal case that could strip away shareholders’ rights to sue public companies. The Harvard professor, Hal S. Scott, runs a Wall Street advocacy group supporting deregulation. The lawyers both made their names busting labor unions; one of them, Jonathan Mitchell, is a current Trump nominee, and social media posts link the other, Wally Zimolong, to discriminatory views.

A trust run by Scott, an emeritus professor at Harvard Law School, sued Johnson & Johnson in a New Jersey federal court last month, seeking to force the company to allow shareholders to vote on a proposal that would take away their right to sue the company in court. Johnson & Johnson, relying on a determination by the SEC that such a measure would risk violating New Jersey state laws, declined to present the proposal to shareholders in advance of its April 25 annual meeting. On March 26, the trust sought a court injunction to force the company to include the proposal. On Monday, U.S. District Court Judge Michael A. Shipp denied the injunction but allowed the litigation to proceed.

The Doris Behr 2012 Irrevocable Trust lawsuit is in some sense perverse: a shareholder is seeking to restrict shareholder rights. But Scott has long decried class-action shareholder lawsuits as a boondoggle for lawyers and a burden on shareholders who bear the costs of defending and settling the suits. As president of the Committee on Capital Markets Regulation, he was an early proponent of rescinding shareholders’ rights to sue, suggesting in 2006 that shareholders be allowed to decide whether the companies they invest in should force arbitration. The Committee, according to a 2010 nonprofit filing, has been funded by such Wall Street titans as Goldman Sachs, Citigroup, Fidelity Investments, Deloitte, Pricewaterhouse Coopers, and hedge fund billionaire Kenneth Griffin. In an op-ed in February, Scott said that most shareholder class actions “have no merit, damage shareholder interests, and tarnish the attractiveness of our public capital markets.”

Scott, who did not respond to an email query, has taken strong, sometimes curious, positions against other forms of corporate accountability. In a 2015 op-ed, he disparaged the idea of forcing companies to admit wrongdoing when they settle a regulatory case. What does an admission of guilt accomplish “other than again imposing additional penalties, by perhaps damaging the reputation of a firm?” he asked.

What Scott has in common with attorneys Zimolong and Mitchell, according to F. Paul Bland, executive director at the watchdog organization Public Justice, is “an enormous zeal for the overdog.”

Zimolong is a career union-basher who brags on his website that the American Federation of Teachers once called him “a destructive force,” slyly adding, “I cannot thank the AFT enough for that comment it has been great for marketing.” His bio on the website of the Republican National Lawyers Association describes him as “a movement conservative and a perpetual thorn in the side of the progressive movement.”

A Pattern of Offensive Comments

Posts from Zimolong’s Twitter account, obtained by The Intercept and Type Investigations, show that some of his opinions have been inflammatory.

Before he switched his Twitter account to private, Zimolong posted at least two dozen extreme comments about labor, immigration, Black Lives Matter, and other social issues. In 2016 and 2017, Zimolong called Black Lives Matter a “hate group” and the AFT “a racist organization.” He described gender pay inequity and transgender bathroom access as “fake problems that liberals make up.” He railed against those who employ “illegals” and responded to a news item about a Latino soccer coach impregnating a 14-year-old player by questioning his immigration status. He gloated over the deportation of a Dreamer and a photo of an antifa protester being attacked by a police dog. He said of the National Labor Relations Board, “When is @realDonaldTrump going to dismantle this whacko leftist agency.”

Offensive tweets had caused problems for Zimolong in the past; in 2017, No Penn Union, an organization fighting graduate student unionization at the University of Pennsylvania, severed ties with Zimolong after some of his tweets were made public, saying, “We were unaware of his personal views … and his views do not represent us.”

“Like many people, I regret how what I said on twitter is perceived,” Zimolong said by email. He pointed out that he has represented a gay bar franchise, a mosque, and a black church in Philadelphia and emphasized that he is only local counsel in the Doris Behr case and doesn’t play “a substantive role.” He said that he does not consider Black Lives Matter a hate group and that people should be free to use the bathroom that makes them most comfortable.

Mitchell, dubbed a “mastermind of anti-union” campaigns by the New York Times, has been nominated by President Donald Trump to chair the Administrative Conference of the United States, an independent agency that recommends improvements to administrative procedures. He was a volunteer on Trump’s transition team and a Supreme Court clerk for Antonin Scalia.

In two cases filed in collaboration with another free market-oriented nonprofit, the Freedom Foundation, Mitchell represented government workers in Washington state who sought a refund on the agency fees they had to pay even though they had opted out of being in a union. Federal judges have dismissed both claims, but plaintiffs in one case have said they will appeal.

Mitchell also represents the U.S. Pastor Council, which sued the Equal Employment Opportunity Commission and other government officials seeking an exemption from EEOC rules that govern spousal benefits for same-sex partners. The 1,000 members of the council “believe that the Bible is the word of God,” the complaint says, adding that “the Bible repeatedly and explicitly condemns homosexual behavior.”

In January, Mitchell filed an amended complaint against Harvard Law Review, Harvard College officials, and Education Secretary Betsy DeVos in an ongoing case that accuses the Law Review of illegal race and sex discrimination because it gives “preferences to articles written by women or racial minorities.” The suit also faults Harvard for giving preference to women and people of color in faculty hiring decisions. Mitchell did not respond to an email query.

Mitchell is working with Zimolong in another case in which they represent a plaintiff seeking class status on behalf of employees who claim that they should be reimbursed for dues they were required to pay to a union as a condition of employment.

Now, the two are collaborating to push mandatory arbitration of shareholder grievances.

The shareholder arbitration issue first came to a head in 2012, when the Carlyle Group included a mandatory arbitration requirement in its initial public offering documents, sparking opposition from shareholder advocates. The SEC pressured Carlyle to drop the requirement, saying that it couldn’t conclude that the policy was consistent with “the public interest and protection of investors.”

In the wake of the Johnson & Johnson controversy, several SEC commissioners have spoken out on the issue. Citing the case in a speech last month, Commissioner Hester Peirce said that class-action shareholder lawsuits can depress shareholder value in what is often “meritless litigation.” In February, SEC Chair Jay Clayton issued a statement on the ongoing Johnson & Johnson litigation, saying a court — not the SEC — would be the appropriate venue to decide the outcome. But he described the broad issue of shareholder arbitration as “unsettled and complex” and said it would take a “measured and deliberative” effort by the SEC to come to a policy decision on the matter.

Bland argues that a win by proponents of mandatory shareholder arbitration would wipe out the ability of small investors to fight back against fraud. Big players like Vanguard or Fidelity could afford to bring individual cases in closed-door arbitration when the next WorldCom-scale fraud comes along, he said. But he added that no lawyer will represent the lone retail investor who’s lost $5,000 as the result of a corporate fraud: “Retail investors saving for retirement will lose all their rights if securities class-actions are wiped away.”