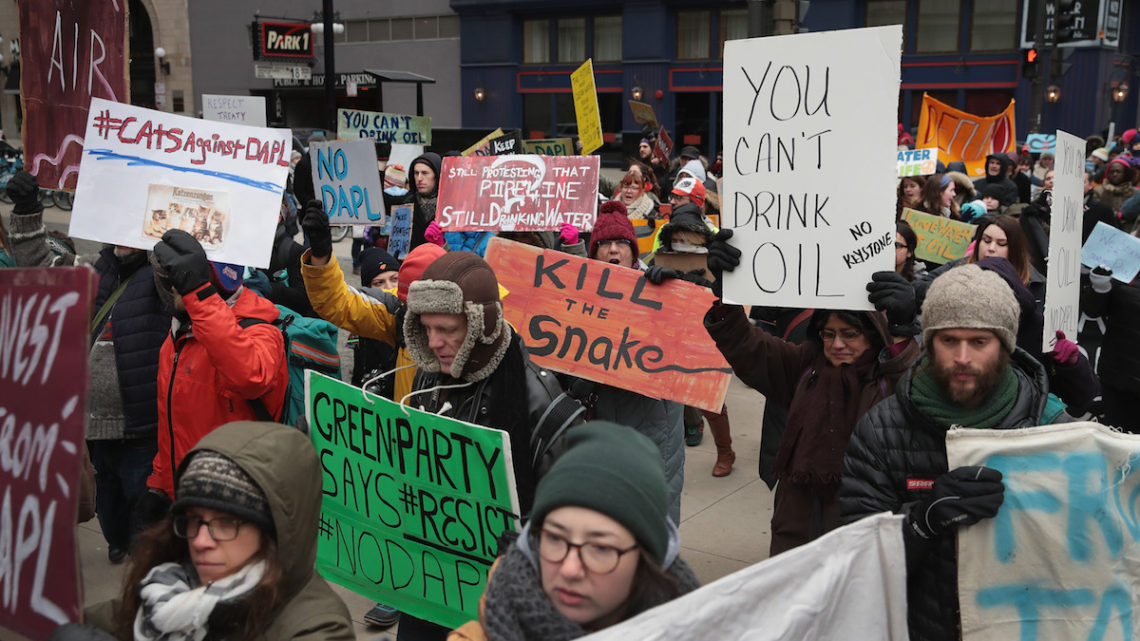 Scott Olson via Getty Images
Demonstrators march toward Trump Tower while protesting the construction of the Dakota Access pipeline on February 4, 2017 in Chicago, Illinois.

Helen Yost, a 62-year-old environmental educator, has been a committed activist for nearly a decade. She says she spends 60 to 80 hours a week as a community organizer for Wild Idaho Rising Tide. She’s been arrested twice for engaging in non-violent civil disobedience.

Yost may not fit the profile of a domestic terrorist, but in 2014 the FBI classified her as a potential threat to national security. According to hundreds of pages of FBI files obtained by the Guardian through a Freedom of Information Act lawsuit, and interviews with activists, Yost and more than a dozen other people campaigning against fossil fuel extraction in North America have been identified in domestic terrorism-related investigations.

The investigations, which targeted individual activists and some environmental organizations, were opened in 2013-2014, at the height of opposition to the Keystone XL Pipeline and the expansion of fossil fuel production in North America.

The new FOIA documents reveal the bureau’s motivation for investigating a broad cross section of the environmental movement and its characterization of non-violent protesters as a potential threat to national security.

In 2010, the DOJ’s inspector general criticized the FBI for using non-violent civil disobedience as grounds to open domestic terrorism investigations. US citizens swept up in such investigations can be placed on terrorism watchlists and subjected to surveillance and restrictions on international travel. The designation can also lead local law enforcement to take a more confrontational approach when engaging with non-violent activists.

The FBI’s 2013-2014 investigation of Keystone XL activists in Houston violated internal agency guidelines designed to prevent the bureau from infringing on constitutionally protected activities. The investigations opened in 2013-2014 were closed after the FBI concluded that the individuals and organizations had not engaged in criminal activity and did not a pose a threat to national security.

In 2015, the Obama administration rejected the Keystone XL pipeline project, which required State Department approval because it would cross international borders, handing the environmental movement a major victory. More large-scale protests followed, including the standoff over the Dakota Access pipeline, which temporarily delayed the project.

But those decisions have been reversed in recent years. Donald Trump has approved construction of the Keystone XL and Dakota Access pipelines, and his administration has also advocated for stiffer penalties against activists who engage in non-violent direct action targeting fossil fuel infrastructure. Meanwhile, in the wake of the Standing Rock protests, seven states have passed legislation making it a crime to trespass on property containing critical infrastructure.

In its July 2014 file on Yost, the FBI cited federal anti-terrorism legislation prohibiting “attacks and other violence against railroad carriers” as the primary justification for opening the investigation. Violation of the law can lead to up to twenty years in prison. Activists who engage in non-violent civil disobedience and are charged with minor offenses such as trespassing are typically released within 48 hours.

The FBI characterized Yost as being driven by a “desire to stop fossil fuels which, in her political view, are destroying parts of the US, specifically Montana, Idaho and Washington”. In addition, the FBI discussed the case with the US attorney’s office in Idaho, local law enforcement, and BNSF railway, which operates the main rail line delivering coal and oil to export terminals in the Pacific North West.

According to the FBI file, the bureau opened the investigation based on information that Yost “was organizing and planning on conducting illegal activities against railroad companies from Montana into Idaho and Washington”.

WIRT did participate in a series of community-led events and workshops in July and August 2014 opposing the transport of oil and coal by rail. “Investigators may have conflated several community events to assume such fictitious allegations,” Yost said in an email.

For several years, WIRT, founded in 2011, had been publicizing its actions on the organization’s Facebook page. Much of its activity had focused on stopping the passage of huge trucks known as megaloads, which transport processing equipment to tar sands oil fields in Canada and weigh hundreds of thousands of pounds, along one of Idaho’s scenic byways.

The campaign involved posting public records on the megaload routes, tracking their progress, and at times blockading their movement.

Yost was also active in protesting the shipment of coal and oil by rail to export terminals in Seattle. In the summer of 2014, WIRT, along with several other environmental organizations and native groups across the Pacific Northwest, sponsored a series of rallies and workshops in the region.

Those protests were peaceful – a handful of activists in Montana including the environmental writer Rick Bass were arrested for trespassing – and in the end the FBI concluded that Yost did not pose a threat to national security. Several months later the investigation was closed.

However, in the file closing the case, it appears that Yost has been watchlisted, which is standard for named subjects of FBI domestic terrorism investigations, according to Mike German, a former FBI agent who is now a fellow with the Brennan Center for Justice. Being watchlisted can lead to heightened scrutiny from law enforcement and delays or additional screenings when traveling. Yost said she had not traveled overseas since the FBI investigation.

Yost, who was contacted by an FBI agent when the case was still active, said she was not surprised by the agency’s actions. Surveillance was a form of suppression, she said, and this was another attempt to criminalize the actions of “normal people” working to protect natural resources. But she remains undeterred.

“Assume they know the color of your underwear every morning and get up and resist anyway,” Yost said.

Herb Goodwin, a 70-year-old activist, has a similar philosophy. “We’re all under surveillance,” Goodwin said. “If they want to look at your stuff, they’re going to.”

In 2013-2014 Goodwin frequently participated in actions organized by Yost and WIRT. He was also part of the Occupy Wall Street protests in Bellingham, Washington, in 2011 and was one of 12 individuals arrested that year for blockading a BNSF coal train passing through the city. They became known as the Bellingham 12.

Goodwin was one of at least a dozen environmental activists, many of them affiliated with the group Deep Green Resistance, contacted by FBI agents in autumn 2014. In early October that year, not long after Goodwin returned from a megaload resistance campaign in Idaho, an FBI agent and a police intelligence officer showed up at his residence. According to Goodwin, they wanted to ask him questions about the environmental group Deep Green Resistance. Goodwin refused to cooperate and referred the agents to his lawyer, who himself became a subject of interest to the FBI.

Founded in 2011 Deep Green Resistance (DGR), based on the principles laid out in the book of the same name, describes itself as a radical organization that “uses direct action in the fight to save the planet”. Though the group supports underground movements, its members abide by a code of conduct that includes a commitment to nonviolence and operating entirely above-ground. According to the group’s website, “We do not want to be involved in or aware of any underground organizing.” In another FBI interview with a DGR member documented in the files, the activist even invited the agents to attend one of DGR’s presentations.

FBI files show that the bureau initiated the two-year investigation into DGR to determine if the group or any of its members were planning to engage in the destruction of energy facilities or attacks against railroad companies, referring to the same federal statute cited in the Yost investigation.

But the FBI also took an interest in constitutionally protected activities, including DGR members’ participation in public meetings and lectures and the group’s early organizing efforts.

Even though the FBI investigation found no evidence that DGR was planning to engage in violent activity, it often portrayed the group as an extremist organization. One individual contacted numerous times by the FBI was said to have been a “suspected member of the Deep Green Resistance’s extremist wing” and a participant in DGR’s “Midwest extremist planning process”. DGR did have a strategic planning conference in Wisconsin in spring 2012 which they said was attended by about 30 people, but it was publicly advertised and focused on building the organization, fundraising, and leadership training.

The FBI also focused its attention on DGR organizing at Western Washington University, which hosted a lecture in 2011 by two of the group’s members, Max Wilbert and Dillon Thomson. Information about the lecture, titled Environmentalism for the New Century, and about the professor who hosted it was included in the FBI files. Wilbert, who attended WWU, is also a member of DGR’s board of directors.

As part of the investigation, the FBI met with the university’s police department to “discuss possible Deep Green Resistance presence on the WWU campus”. The FBI also said it would attempt to determine whether any of the professors in the environmental sciences department were involved in the “DGR movement”.

The sweeping investigation into DGR’s activities was formally closed in 2014 but Wilbert assumes that the group is still being closely watched. Wilbert, who is also a writer and photographer, frequently posts short polemical essays on his Facebook page or the Deep Green Resistance website.

Wilbert said that on 7 September 2018, nearly four years after the investigation was closed, he got a call from an FBI agent in Seattle informing him that the bureau had received an anonymous tip regarding something he had written online. The agent also left a card at Wilbert’s parents’ home.

“I’m pretty outspoken about being a revolutionary, somebody who believes in the necessity for revolutionary change,” Wilbert said. “It’s not something I hide.”

An FBI file documenting the online tip describes Wilbert as “an environmental extremist” involved in “inciting violence in Seattle.”

German, the former FBI agent, whose recent book, Disrupt, Discredit, and Divide, chronicles the troubling post-9/11 expansion of the FBI’s domestic surveillance powers, said the agency had failed to heed the warnings laid out in a 2010 justice department IG investigation that criticized the FBI’s targeting of certain domestic advocacy groups. According to German, the Yost files and the two-year DGR investigation show how “ineffective these internal oversight mechanisms are to preventing abusive and wasteful investigations of non-violent protesters”.

9/27/19: This story has been updated to remove sensitive information about one of the characters.