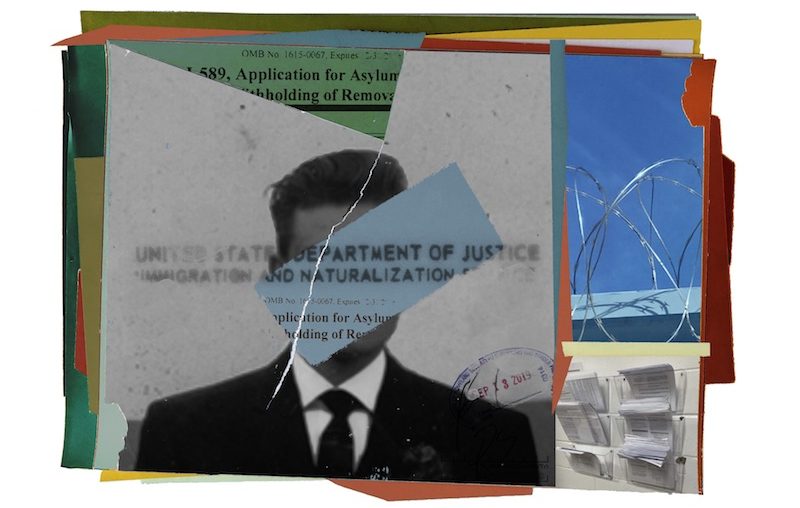 You can sometimes tell how the day is going to go based on the mail. Each morning, someone from the Al Otro Lado legal office in southern Los Angeles, not too far from the Los Angeles River, goes to pick up deliveries from the PO box—stacks of mail, mostly slim, official missives from US Citizenship and Immigration Services. Often it’s Ricardo Diaz who handles this errand, sometimes in his own car or sometimes in the organization’s donated candy apple–red Mazda, on his way from one task to another: immigration court; a meeting at a client’s house; the police station to pick up a report; a detention facility out in the desert, where it’s cheaper to hold detainees and difficult for advocates to reach them—a fact that can feel by design.

More often than not, Diaz leaves the post office with a satchel full of envelopes that, at first glance, don’t look especially encouraging, whose sameness is part of what turns the mail run into an anxious lottery. An approval notice, a green card, an asylum rejection, a work permit, a deportation order: You never know what casualty or small victory the day will bring.

Diaz, who is twenty-five, has been working with Al Otro Lado—first as a paralegal, and more recently as an accredited immigration representative—for more than two years, starting not long after he graduated from UCLA. Naturally, the work is wearing on him. It’s wearing on all the advocates at Al Otro Lado, and many more throughout the country. Like many immigration legal-aid providers these days, they are slogging through small battles—if one can call winning an asylum case small—and doubling down on the big ones, suing the government again and again for what they consider its brazen disregard for the law. The job is all-consuming and urgent and only worsens as the number of people caught up in the immigration court system who are desperately seeking refuge in the United States increases by the day.

Immigration law—or, more specifically, legal services for those seeking immigration relief—has always been a punishing field, a Sisyphean vocation within a legal system in which people often get stuck, and with grave consequences. For many asylum seekers, deportation can be a death sentence—never mind the treacherousness of the journey itself, or the fact that an alarming number of people have died under the supervision of both Immigration and Customs Enforcement (ICE) and Customs and Border Protection (CBP). Under the Trump administration, circumstances for newly arrived immigrants have only gotten worse. From the separation of families as a matter of policy, to the gutting of asylum protections and rolling back of precedent, to the intensified militarization of the southern border, to the increasingly prolonged rates of detention: There has arguably never been a worse time to be an asylum seeker in the United States.

This is due, in part, to an administration that has taken a xenophobic approach to immigration, with an openly hostile stance toward asylum seekers and their advocates. “The asylum system has been abused for years,” former attorney general Jeff Sessions announced in September 2018, echoing the Trump administration’s script that asylum seekers have been gaming the system with “dirty immigration lawyers” as their accomplices.

Meanwhile, legal-aid workers have been inundated with the horror stories and paperwork of those seeking representation—far more than they are able to take on. They record their clients’ statements about being stalked, or raped, or tortured, or shot and left for dead, and prepare them for testimony in court. (As one clinical study put it, immigration “lawyers must be attuned to the exquisite details of a case.”) In turn, listening to these stories day in and day out, absorbing their gruesome details, has worn down even the most seasoned attorneys. It is a hardship that pales next to that of their clients, but the fact remains that as a result of this intimacy with suffering, lawyers and paralegals are struggling just to stay in the work.

Lauren Markham is the author of The Far Away Brothers: Two Young Migrants and the Making of an American Life (Crown, 2017).