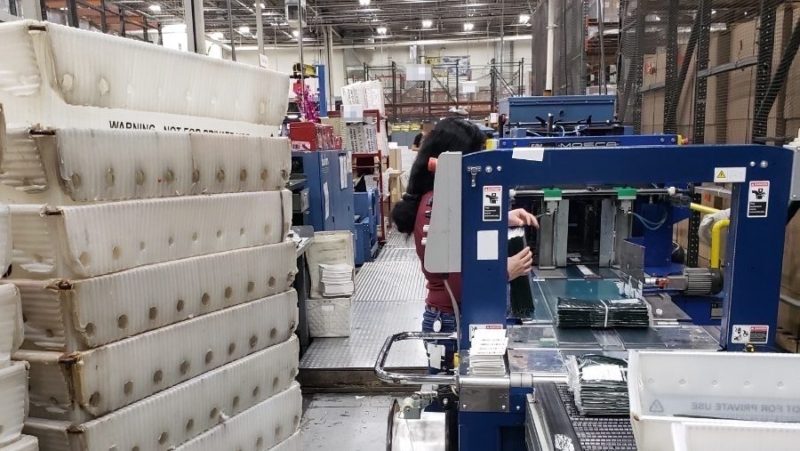 At least six people who worked in a Long Island, New York, warehouse leased by Broadridge Financial Solutions have died of Covid-19, according to their family members and news reports.

Earlier this month, The Intercept and Type Investigations reported that employees of TMG Mail Solutions, a Broadridge contractor that prints and mails financial documents, had been pressured to work during the Covid-19 pandemic even as some of their co-workers tested positive for the virus. The workers also expressed concerns that delays in the provision of personal protective equipment like masks and gloves made an outbreak inevitable.

Broadridge Financial Solutions is a global financial services company that made nearly $4.4 billion in revenue last year. The production floor of the warehouse is staffed by Broadridge employees and TMG employees, along with employees of Randstad, a multinational staffing firm that has an office inside the building.

Four of the deceased workers were Broadridge employees, according to their families, and two were employees of Randstad.

Randstad declined to answer questions, noting that “personal employee information is considered confidential.” Broadridge declined to provide the number of employees who have contracted Covid-19 or the number who have died from the virus, citing privacy concerns.

“Our thoughts are with the families and co-workers at this difficult time,” Broadridge spokesperson Gregg Rosenberg wrote in an email. “This is a terrible loss for the Broadridge community. The health and safety of our employees, their families, and our community are our highest priority, and we have implemented extraordinary safety measures to keep workers safe in advance of public health guidelines.”

A representative of TMG said that fewer than 10 of its employees at the Broadridge warehouse had tested positive for the virus and that none had died.

One of the Randstad employees, Jose Bonilla Flores, had worked at the company for more than a decade, according to his wife, Ana Menjivar, who works for TMG. She described him as a diligent and tireless worker, someone who didn’t mind the 12-hour shifts, seven days a week that they both worked during the busy spring season when proxy statements were printed and shipped. The couple, from El Salvador, had met at the warehouse four years ago and have a 3-year-old son, Jonathan.

Like many warehouse workers, Flores and Menjivar were anxious about the coronavirus and had heard rumors that it was spreading among workers. “We were scared — that’s all we talked about,” Menjivar said. “At the same time, we didn’t want to lose work.”

Menjivar said she had been among the TMG workers to receive a flyer on the warehouse floor. As The Intercept and Type Investigations previously reported, the flyer warned, “If you don’t show up for work you will not be paid and after two days you will be considered to have abandoned your job.” The flyer also discouraged TMG employees from wearing masks or gloves unless they were sick or had compromised immune systems.

Flores, 53, had a slight cough and lost his sense of smell and taste but continued to work until April 2, when he developed a fever. The following day, he visited Brentwood Medical Center, where he was diagnosed with suspected Covid-19. A test determined he was positive. By then, Menjivar had also come down with symptoms of Covid-19 and was instructed by the same doctor to quarantine at home.

Over the next two weeks, Menjivar, whose symptoms were less severe, cared for her husband. He was weak and bedridden, she said, but his condition appeared to be stable until April 17, when he was suddenly unable to speak. She immediately called 911, but by the time the paramedics arrived, he had already died from a heart attack caused by the virus, a trend among Covid-19 patients that is alarming cardiac experts.

Menjivar said that neither she nor Flores had been provided masks or gloves to wear at work. She said that Flores’s final day at work was April 2 and hers was April 3. “The only thing that the companies care about is production,” she said over the phone between sobs. “They didn’t start giving people masks until he was already sick.”

Another Randstad employee, Lucio Acosta, 64, also died in April of Covid-19. His daughter, Mayra Acosta, said that her father had worked for Randstad for many years and that he had tested positive for Covid-19 at Southside Hospital in Bay Shore, New York. A close friend and co-worker, Luis Flores, also confirmed that Acosta worked for Randstad.

A Randstad spokesperson, Madison Southall, declined to say if or when employees were provided personal protective equipment like masks and gloves, stating that the company was “following applicable state and local orders as well as guidance from the Centers for Disease Control and Prevention (CDC) and public health authorities with respect to providing employees with protective equipment.”

Rosenberg, the Broadridge spokesperson, previously told The Intercept and Type Investigations that, in early April, the company provided gloves, masks, and hand sanitizer to its own employees and, a week later, offered the protective gear to all workers in the warehouse. In response to a recent inquiry, however, Rosenberg said that this had been a miscommunication. He said that Broadridge managers had handed out masks on March 26 to all workers on the production floor — including workers for TMG, Randstad, and Broadridge — and strongly encouraged them to wear them.

Menjivar and three other current TMG employees, all of whom work on the production floor, contradicted Rosenberg’s account. Menjivar, who worked until April 3, said she never received a mask nor was encouraged to wear one. Three other current TMG employees also reported that they were not provided protective equipment until April, after The Intercept and Type Investigations first contacted Broadridge. Menjivar also said that she saw one TMG worker wearing a mask brought from home. A supervisor confronted the worker and made them remove it, she said, saying that masks were prohibited unless the worker had a doctor’s note saying it was necessary.

An attorney representing TMG, James Prusinowski, did not respond to Menjivar’s account, stating that the company cannot discuss specific employee matters. He also declined to state if or when TMG employees were provided masks and gloves. “TMG is following and has followed all applicable CDC guidelines and NY requirements regarding social distancing, use of PPEs and other protocols to ensure employees remain safe during this period,” he wrote in an email.

In addition to the Randstad employees, four employees of Broadridge have died from Covid-19, according to family members. Among the deceased is Juan Gonzalez, a broad-shouldered 49-year-old who worked in the quality control department, his sister said. Gonzalez had served in the Navy, she said, and worked at Broadridge more than a dozen years. He died on the same date as Flores, April 17, after being on a ventilator in the hospital for two weeks. 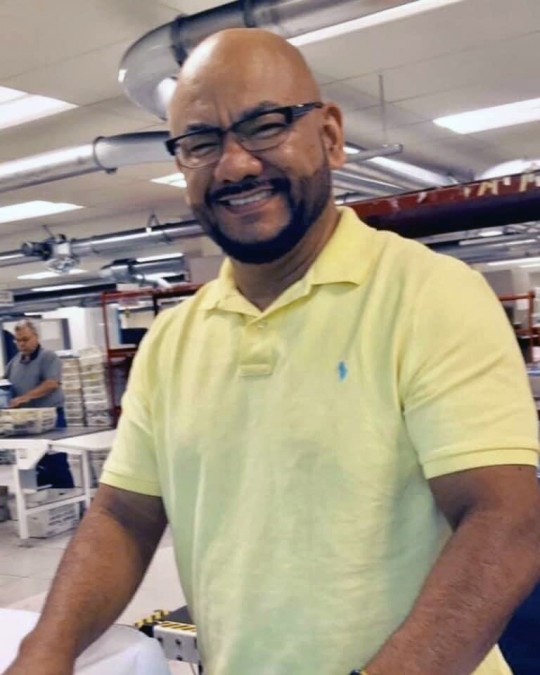 Juan Gonzalez at work at the Broadridge Warehouse in Brentwood, New York.Image: Courtesy of Johanna Medina

“A couple of days before he was hospitalized, he told me that someone in the building had tested positive,” said Johanna Medina, Gonzalez’s sister. She said that after the positive test, he told her that some Broadridge workers had been sent home but that he had remained. “I told him to take precautions.” She described her brother, who was married and had a 17-year-old son and an older stepdaughter, as a strong and healthy person who loved to barbecue. “It’s still unbelievable that he’s gone,” she said.

Anthony DeNoyior, a senior production operations manager at Broadridge, died from Covid-19 two days after Gonzalez. According to his LinkedIn profile, the 55-year-old had worked at the company since 1990. DeNoyior was also a volunteer auxiliary police captain in New York’s Suffolk County, and a Newsday obituary reported that he was married with two sons. A GoFundMe page has been established to raise funds that the family will dedicate to charitable organizations to honor his legacy.

Another Broadridge employee, Astrid Echenique, whose LinkedIn profile identifies her as a data entry clerk for the company, also died from Covid-19 complications, according to her family. A close relative who did not wish to be named said one of Echenique’s family members, who also works for Broadridge, tested positive for Covid-19 as well, but recovered. Echenique, the family member said, had lupus, a chronic autoimmune disease that makes fighting off infections more difficult.

A fourth Broadridge employee, Aleyamma Kuriakose, died from Covid-19, according to family members, co-workers, and news stories published in India West and The Tribune.

The New York State Attorney General’s Office began looking into labor conditions at the Broadridge warehouse in early April, after being contacted by The Intercept and Type Investigations. Informed of the recent deaths, a spokesperson for the office said it had received multiple complaints from workers at the warehouse and continues to gather information from workers and their families.

For David Michaels, the former head of the Occupational Safety and Health Administration during the Obama administration, the dangers faced by workers during the Covid-19 pandemic have been exacerbated by OSHA’s failure to take action.

“Some employers are only now providing the proper PPE to Covid-exposed workers, and far too many still provide no PPE or even adequate social distancing,” he said. “They can get away with it because OSHA refuses to issue an emergency standard requiring employers to protect their employees from this deadly virus.” OSHA did not respond to a request for comment by publication time.

At her home in Brentwood, Menjivar is struggling to piece her life back together, overwhelmed by the sudden loss of her husband. “It’s so hard to be alone,” she said, as her toddler cried in the background. She said that a representative of Randstad had recently called her to express their condolences and said they would be sending her a basket of food.