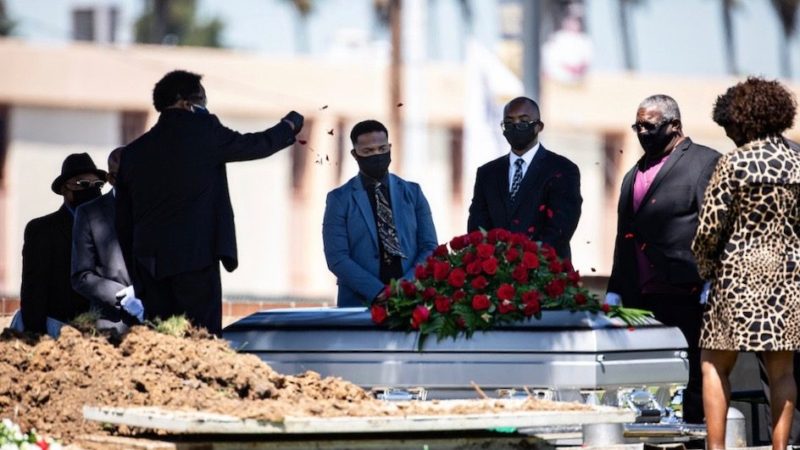 Shawn’te Harvell leaves home before sunrise. As soon as he gets through the door at work, he is checking voicemails in between answering calls that are already coming in. He puts on an N95 mask, foot covers, face shield and gloves, and pulls a Tyvek jumpsuit over his collared shirt and slacks. He unzips a body bag, sprays it down with disinfectant and plugs the orifices. This is the first embalming of at least eight today.

His unrelenting regimen is the new reality for funeral directors, particularly black funeral directors in urban COVID-19 hotspots. The disease has exposed persistent racial inequalities in housing, employment and healthcare – African Americans are dying at nearly three times the rate of white people. As those numbers continue to mount in predominantly black communities, families turn to black funeral homes which have for centuries sustained a rich African American homegoing tradition. But black funeral home owners are in triage mode. The surge in business hasn’t translated into financial security; instead it compounds the stresses brought on by the virus. They are now social distancing enforcers processing more bodies than ever while often shouldering costs for desperate grieving families.

At Harvell’s funeral home in Elizabeth, New Jersey, a largely Hispanic and black working-class suburb, he constantly transitions between embalmer and compassionate community pillar. He gently greets families but also has to remind the 10 people maximum allowed in the home to stay 6 feet apart at all times – even if someone breaks down in tears, no exceptions. He worries about the long-term impact all of this will take on his mental health and that of his colleagues. “We are emotionally, mentally, [and] physically beaten down,” Harvell, 38, said. “Every funeral home in this area has become a sweatshop.”

Edith Churchman’s funeral home in Newark, New Jersey, was founded in 1899 by her great-grandfather James. Hers is one of many homes that black communities have come to rely on. “Funerals in our community, though sad occasions, have always served to strengthen and reinforce the importance of family ties,” said Churchman. “People may not have much during life, but in death they can have something grand.”

Starting soon after the civil war, black funeral home directors were responsible for offering black people the dignity and honoring of heritage that white funeral home directors refused to. Even during the Great Depression, black funeral homes accepted IOUs and let customers barter for their services in lieu of payment because they knew how integral they were to the community. During segregation, when city ambulances refused to enter black neighborhoods, black undertakers provided their hearses instead. Funeral homes were called upon to provide crucial funding for the civil rights movement and their hearses gave leaders like Dr Martin Luther King Jr and the Rev Ralph Abernathy safe passage throughout southern towns.

Many were mom-and-pop operations serving low-income communities and turning low profits in the best of times. Low net worth or poor credit often kept struggling owners from getting the loans they needed to really prosper.

“People have this perception that the funeral industry is this cash cow,” said Hari Close, president of the National Funeral Directors & Morticians Association, the country’s oldest membership organization for black funeral professionals. He taught part-time at two colleges for a decade to pay staff at his funeral home in Baltimore, Maryland. “That’s just an illusion.”

The fewer than 3,000 black funeral homes still in operation face competition from chains, a growing acceptance among black families of alternatives like direct burial and cremation, and a lack of successors willing to carry on the family business. NFDMA membership, which stands at 1,400, has steadily decreased since 1997. Membership in the National Funeral Directors Association, the country’s largest group of trade professionals which is not race-specific, has increased over the past decade and hovers around 20,000.

“These funeral homes are struggling because a lot of families don’t have insurance. We are providing the service in the anticipation of being reimbursed,” Close said, adding that government reimbursement, even before the pandemic, could take up to two months.

Nationally, the median cost of a funeral with burial is just over $7,600; cremation costs about $5,000 in most of the country. Stephen Kemp, a black funeral director in Southfield, Michigan, estimates that 80-90% of his clients rely on a “final expense” insurance policy to cover funeral and burial costs.

In normal times, local or state government burial assistance is the resource of last resort. The most basic provision is indigent burial, often in mass graves like the one on Hart Island in New York. Some states provide funeral homes with set reimbursement amounts to cover funeral and burial costs for families receiving public aid.

In Detroit, Monique Marks, president and CEO of Franklin-Wright Settlements, an agency that provides basic services to the city’s neediest, said she has seen “an enormous surge” in these aid requests. But with government offices closed, the process of getting that help is cumbersome at best.

“Some of the resources are so buried under so many layers that even us professionals have to be trained to know how to navigate [the system],” Marks said. Instead of directing her grieving clients to the state for help, Marks now calls one of a handful of trusted funeral homes and seeks their help directly. Some accept the work, not knowing when – or if – they will be paid.

In March, the industry’s critical public health function and fragile infrastructure led the National Funeral Directors Association to seek special relief for the “deathcare profession” and the “poor, underserved and indigent who cannot afford a funeral” in the stimulus bill. Their request to Congress went unheeded. A recent COVID-19 relief bill, passed by the House of Representatives on 15 May, includes funeral service as essential work. But President Trump declared the bill “dead on arrival”.

Under the Federal Emergency Management Agency’s 31 March guidelines for COVID-19 emergency medical care, hospitals will receive reimbursements for certain costs, including temporary expansions to their facilities and their COVID-19 PPE expenses. No similar provision was made or guidelines issued for deathcare workers and funeral homes. Although Fema has offered funeral assistance after other emergencies, such as Hurricane Katrina, the Trump administration has yet to issue formal authorization of funeral reimbursement funds for families under this program.

Frustrated with the lack of action, Carol Williams, NFDMA’s executive director, made a desperate appeal to Fema on behalf of her members in April. They were awash in infected corpses, she explained, and needed help finding affordable PPE. She was redirected to Georgia’s emergency management agency, which gave her six phone numbers to try, none of which could help her.

While many funeral homes could qualify for small business loans, some owners like Churchman were simply too busy to apply. “In just the first 10 days of April, we were already at five times the average volume of monthly calls,” Churchman said. Even if she had applied, there’s a good chance she would have been shut out of the program.

For Williams, the lack of government action is another form of indifference toward African American communities and those who serve them. “I don’t know how many of us are in the planning process,” she said. “Where is the caring about what happens to our people?”

When Robert Robinson fell ill in March with a presumed case of COVID-19, paramedics took him to Detroit’s Sinai-Grace – the hospital that made national headlines in April when pictures of stacked body bags in vacant hospital rooms were leaked to the media. Robert’s wife, Gwyn, was already on a ventilator at Providence hospital in suburban Southfield, Michigan. On 28 March, Robert died. Three days later Gwyn did, too. Their bodies were sent to Stephen Kemp’s funeral home in Southfield. More than two weeks later, their bodies were still in Kemp’s refrigeration unit alongside 47 others. All 49 were African American, all believed to be victims of Covid-19.

“I’ve never been in a situation like I have been in the last two weeks,” said Kemp, who has been a mortician for 36 years. “The doctors are so overwhelmed that they don’t have time to put two lines on saying that they’re COVID-19 or whatever the diagnosis and cause and manner of death,” Kemp said, referring to the death certificate funeral home directors need before they can proceed with any burials. Without that verification, bodies stack up and families wait in limbo for closure.

In early April, the state of Michigan approved an order requiring physicians to certify death records within 24 hours of a known or suspected COVID death. The order was designed to speed up the process and ensure accuracy in the official death toll, but it didn’t include sanctions for those who fail to comply.

“It’s not being followed,” Kemp said flatly, noting that in some extreme cases it took him two or three weeks to chase down a doctor. “You’re playing tag trying to catch them to sign a simple medical certification.” In the worst cases, this results in a tragic treatment of the dead – residents in a Brooklyn neighborhood recently reported a foul stench emanating from a pair of trucks parked outside a black funeral home. When authorities discovered bodies inside the vans, the owner said he had run out of space.

In mid-April, Harvell, who typically does 15 funerals a month, had 58 bodies in his care and another 16 awaiting retrieval at nearby hospitals. Before the pandemic, he could arrange burials in a matter of days. Now he’s telling families he has served for years that funerals will take weeks or even as long as a month.

“A lady recently called me and said, ‘Shawn, I’ve been in this house with my mother for a whole day and a half because I can’t find a funeral home that can accommodate me.’” Harvell couldn’t turn her away. “I’m maxed out and I just had to take her,” he said.

At the end of the long day and night, Harvell heads home to his own family. But before he enters the house, he takes off his clothes, sprays them down and leaves everything in a bag by the door. He eats and tries to watch something on television that will distract his mind. But it’s impossible to shake off the day when he knows it’s all just waiting to repeat itself tomorrow.

“Sometimes I just want to bust out and cry,” he says, thinking about what he’s able to offer to families – and what he can’t. “We’re inundated and overwhelmed.”

Dax-Devlon Ross is a Puffin Foundation Fellow at Type Investigations, the author of five books and an award-winning investigative journalist who covers social and criminal justice.