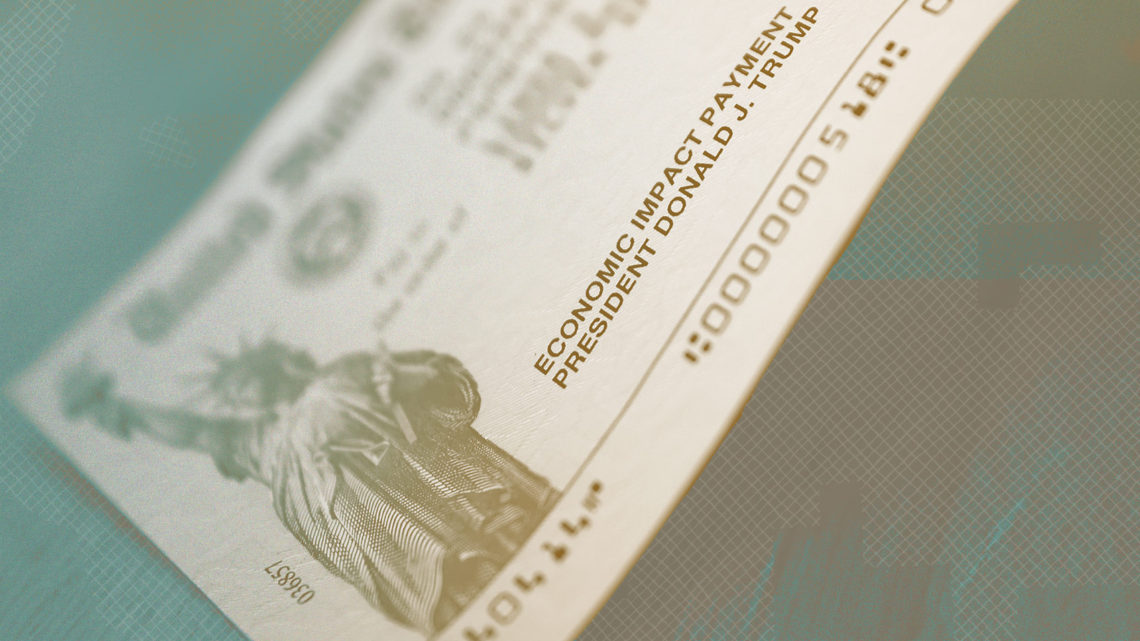 Photo illustration by Kat Wawrykow for The Appeal

Stephen Lehman, a prisoner at Oakhill Correctional Institution in southern Wisconsin, wasn’t hopeful when he heard about the CARES Act, the legislation enacted by Congress in March as COVID-19 battered the economy. The law provides direct economic assistance to American workers, families, and small businesses, including economic impact payments to households of up to $1,200 per adult for individuals whose income was less than $99,000 (or $198,000 for joint filers) and $500 per child under 17 years old—or up to $3,400 for a family of four.

Though Lehman, 48, worked in carpentry before he was incarcerated, he said “I wasn’t sure I could get it.” But he figured he would try. He asked a friend on the outside to apply on his behalf.

On May 4, Oakhill informed Lehman that he had received his check. The next day, however, a letter from the Wisconsin Department of Corrections told him that the prison was putting a hold on the funds. Normally, Lehman said, when Oakhill holds mail, it sends a notice allowing prisoners to challenge the withholding. This time, he wasn’t given an option for appeal. “It was a complete violation of DOC’s own policies and procedures,” he says. In an emailed statement regarding Lehman’s claims, the Wisconsin DOC said, “Staff there [at Oakhill] have been returning the stimulus checks as directed.”

Ironically, Lehman later received the same form letter from President Trump sent to millions of other Americans that boasted about the CARES Act and his administration’s efforts to assist Americans. “We are fully committed to ensuring that you and your family have the support you need to get through this time,” the letter read. For Lehman, the letter was a bitter insult because the stimulus funds could have been extremely helpful. “Our people on the street take care of us,” he said in a phone call, referring to family and friends. “If they aren’t working, we ain’t taken care of.”

Citing the IRS rules, prisons, jails and detention centers have confiscated the funds from incarcerated people. “The Wisconsin Department of Corrections (DOC) has been instructed to follow Internal Revenue Service (IRS) instructions and return all Economic Impact Payment (EIP) checks for Persons In Our Care (PIOC) to the IRS,” the emailed statement said.

Wisconsin isn’t the only state seizing the funds. In Kansas, the Department of Corrections confiscated more than $200,000 by early June. And some facilities have threatened prisoners with criminal prosecution if they don’t return the money sent to them by the IRS.

But legal experts say that the IRS acted beyond its authority, perhaps even illegally. When Congress passed the CARES Act, it never mentioned incarcerated people at all. The IRS appears to have devised its own policy, usurping Congress’s powers. That decision has prompted an uproar from advocates for prisoners, and it drew a harsh rebuke from at least one senator who voted for the law.

“There is nothing in the CARES Act that gives the IRS authority to decide that incarcerated people are ineligible to receive stimulus checks,” Senator Sherrod Brown, an Ohio Democrat, told The Appeal and Type Investigations in an emailed statement. “Inmates—who are disproportionately people of color and from low income communities—already suffer from a lack of resources and heightened exposure to COVID-19 due to the failed response to the virus by the prison system. Incarcerated people and their families need more help during this pandemic, not more undue punishment.”

Experts including the Prison Policy Initiative and the conservative American Enterprise Institute agree, and have posted similar objections to the IRS’s rules on their respective websites. So does the nonpartisan Collateral Consequences Resource Center, which focuses on the many hidden effects of  arrests and convictions. “No federal regulation excludes incarcerated individuals from receiving CARES Act tax rebate payments,” the group wrote on its website after being contacted by The Appeal and Type Investigations.

The IRS did not answer questions about who made the decision to exclude incarcerated people from economic impact payments. “I can’t give you the legal basis,” IRS spokesperson Eric Smith told the Associated Press on June 24. “All I can tell you is this is the language the Treasury and ourselves have been using. It’s just the same list as in the Social Security Act.”

Media outlets, including Yahoo, McClatchy, and Forbes, reported the IRS’s decision to withhold stimulus funds, as did the AARP. And, acting on the IRS guidelines, prisons have discouraged their prisoners from applying for the federal funds. They have issued bulletins telling prisoners they are ineligible. “We inform [prisoners] that if they receive an Economic Impact Payment through direct deposit to an outside account, it is their responsibility to return the funds,” said John Beard, a spokesperson for the Wisconsin Department of Corrections.

Many prisoners who filed taxes in 2019 received the checks in the mail anyway—but the IRS told The Appeal and Type Investigations it could not estimate how many. Some prisoners received the funds automatically since they file taxes every year, while others successfully applied for the money. Though neither is clearly illegal, some prisons are threatening those who received the payments with criminal charges.

On April 30, even before the IRS publicly released its guidance, the West Virginia Division of Corrections and Rehabilitation announced that it was working with state police in “investigating inmate COVID-19 stimulus schemes.” The agency said it identified 125 prisoners who applied for the funds, which it said were “meant for U.S. workers and families.” The agency’s announcement added that many of the prisoners who tried to obtain the money were incarcerated for murder and sex crimes, “mostly against children or family members.” The press release said, “The IRS called for the return of all CARES checks sent to inmates in a Monday bulletin to federal and state correctional officials nationwide.” A spokesperson for West Virginia corrections, Lawrence C. Messina, said on June 23 that the investigation is ongoing.

Other states, including Idaho, Montana, Washington, Nevada, and Oregon, are also cooperating with the IRS by intercepting funds sent to prisoners, or by expropriating any that prisoners have already received.

The stakes of this dispute are high. Nearly 2.3 million people are incarcerated in the United States, many of whom could qualify for the stimulus. According to the Prison Policy Initiative, the median income of incarcerated people before they got locked up was roughly $20,000. That was before the current economic crisis made their finances even more precarious.

Harry Chafe, a 65-year-old detained at the Coalinga State Hospital in Fresno County, California, has one leg and uses a wheelchair. Because of his disability, he says, the hospital has rejected his applications for a paid job. The hospital gives him $12.60 per month, which has to cover toothpaste, shampoo, soap, and other basic hygiene products. In the coronavirus era, being short of basic hygiene products can be deadly. Even in pre-pandemic times, Chafe didn’t have enough money left over for coffee. “It’s $10 for a jar of Folger’s,” he said.

Roy Jones (not his real name) is a 35-year-old prisoner at Fox Lake Correctional Institution in Wisconsin. The IRS mailed his check to his fiance’s address. Prison officials told her they would give the check to him if she sent it to them. She mailed it, but the prison confiscated the money and notified Jones that the check was being returned to the IRS. “I knew they weren’t going to cash it,” Jones said. He didn’t protest the prison’s action, though. “They get attitudes with you, and I try and stay on everyone’s good side.” Jones declined to use his real name for fear of retaliation. The Wisconsin Department of Corrections did not respond to a request for comment on this case.

Prisoners are especially cash-strapped because many of their families, often their only means of financial support, have lost jobs during the pandemic-induced recession. Deborah, whose son is serving a life sentence in Maryland, says that denying prisoners stimulus funds hurts people like her. (She asked that her last name not be used because she fears the prison will retaliate against her son.) “I pay out of my own pocket” for her son’s hygiene items and clothing, she said. “Quite a few of us are seniors giving money we don’t have.”

Other prisoners received the funds and have no intention of returning them. Bob Schueller, 70, is incarcerated at the Stanley Correctional Institution in Wisconsin. A former bricklayer, he files taxes every year and receives a pension. Schueller’s son told him he got the check a few months ago. “I couldn’t believe it,” he said. His son deposited the money into Schueller’s account, and he has already used it to buy soups, soda, shampoo, and toothpaste.

Some correctional institutions have warned prisoners against keeping the funds, however. “Please be reminded that your daily decisions are reflective of how well you integrate treatment and personal change,” reads a letter to prisoners from the Minnesota Department of Human Services that outlines the IRS decision. “Adhering to rules and supervision is a risk factor that is addressed in assessments.”

Another letter, from the Central New York Psychiatric Center, is even more menacing. “Failure to return these funds could result in future adverse action by the IRS,” the letter says, although the IRS has not said anything about such consequences. “When you are discharged, if you have any form of supervision by Parole, they will be alerted. Your treatment team may add a treatment goal for you to display prosocial behavior by returning the stimulus check to the federal government.”

Civil rights attorneys say that prisons are wrong to assist the IRS, which exceeded its authority in making the rule in the first place. “This goes beyond the CARES Act,” says Jonathan Smith, executive director of the Washington Lawyers’ Committee for Civil Rights and Urban Affairs.

He suspects that Congress didn’t even explore the issue of economic impact payments going to prisoners. “They pass laws that are 500 pages that nobody reads,” says Smith. “My guess is nobody thought about it.”

Civil rights groups are looking into suing the IRS—and there’s some precedent for legal action. On June 16, the Washington Lawyers’ Committee, American Civil Liberties Union and Public Interest Law Center filed a suit protesting the Small Business Administration’s (SBA) denial of federal Paycheck Protection Program loans to some small business owners with criminal records. On June 24, the SBA amended its rule to allow more businesses owned by people with criminal records to apply, but the ACLU said the new rule didn’t go far enough and should remove all restrictions relating to an applicant’s criminal history.

Smith says that suing the IRS might be more challenging because the agency issued the restrictions as guidance rather than as a formal rule. Unless Congress acts, he says, state prison systems can continue to say they are following IRS procedures in taking stimulus funds from prisoners. That leaves incarcerated people who receive payments with a difficult choice between returning the funds or risking angering the people who control their lives.

To Smith, the choice for prisoners from a legal standpoint is clear. “I would advise them to deposit the money into their accounts. I don’t think the burden is on them to return it.”

Jordan Michael Smith is a Contributing Editor at The New Republic.