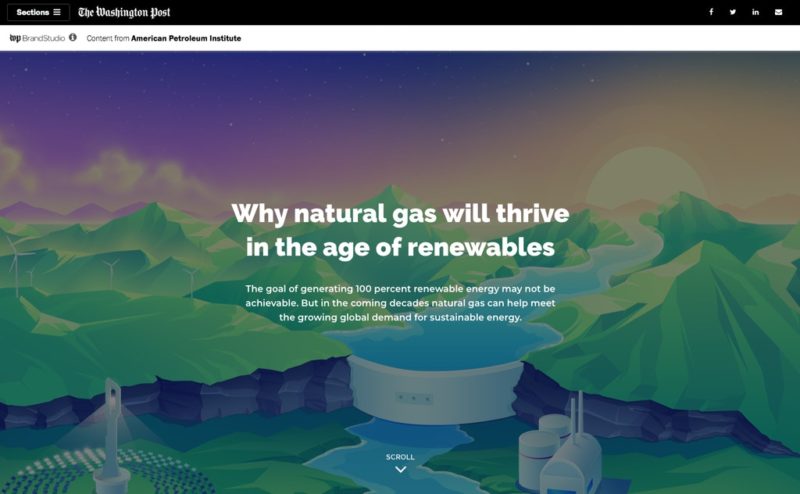 There it was in black and white ­— or black, white, and a palette of gentle greens and blues. With a headline predicting that natural gas “will thrive in the age of renewables,” the article made the case that there are limitations on solar and wind power and that — as a subhead spelled out in aquamarine type — natural gas “is part of the solution.” Why was the Washington Post weighing in on the need for continued production of this fossil fuel in the face of climate change?

Or was it? On closer inspection, the report wasn’t coming from the D.C. paper’s newsroom. Though the link takes you to a page published by WashingtonPost.com, the story is actually a publication of WP BrandStudio, the paper’s branded content platform. In other words, the article is really an advertisement, and the copy was paid for by the American Petroleum Institute. The tagline — “Content from American Petroleum Institute” — is plain to see if you’re looking for it, though easy to miss if you’re not.

It’s not surprising that the trade group representing the oil and gas industry would want to leap to the defense of natural gas now. The notion that the energy source is a “bridge fuel” that will somehow safely deliver us to wind and solar — and past the threat of climate change — has been vaporized by recent science.

The combustion of natural gas does in fact create less carbon dioxide than the burning of coal, as the API “article” notes, pointing out that “new natural gas plants emit 50 to 60 percent less carbon into the atmosphere than new coal facilities.”

But what the piece doesn’t mention is that the drilling, extraction, and transport of natural gas also releases methane. And though carbon dioxide is the best-known greenhouse gas and stays in the atmosphere longer than methane, methane traps at least 86 times more heat than carbon dioxide before it degrades.

Nor does it reference the fact that the amount of methane in the atmosphere has increased sharply in the past few years and, scientists warn, threatens to derail efforts to limit warming. While there are questions as to which of several global sources of methane — including cows, wetlands, and coal mines — is driving the recent spike in emissions, evidence has tied it to the boom of natural gas production. And that in turn has led many scientists to assail the idea that natural gas is a “greener” fuel. In fact, depending on the leakage rate during production, natural gas may be even worse for the climate than coal.

“This idea that natural gas is better than coal is just a distraction,” said Robert Howarth, a biogeochemist at Cornell whose research has tied the particular type of methane newly found in the atmosphere to shale gas production. “If you’re serious about keeping the planet below 2 degrees of warming, you can’t do that without cutting down on methane. We need to move away from all fossil fuels as quickly as we can.”

Not surprisingly, the Washington Post piece — or rather, the American Petroleum Institute piece in the Washington Post — doesn’t include any comments from independent scientists like Howarth. Instead, it quotes Wayne Winegarden, a businessperson affiliated with climate-denying organizations such as the Heartland Institute and the Pacific Research Institute.

Fossil fuel companies aren’t the only ones using stories that appear to be part of a journalistic publication, but are actually paid for by advertisers in attempt to improve an image suffering in the coverage done by actual journalists. Native advertising, as it’s called, has spread misinformation on everything from the “superfood” moringa to Thai seafood slavery, and has raised serious questions about journalistic ethics.

And WP BrandStudio, which has also produced spots for BP and Lockheed Martin, is hardly the only example of a branded content shop associated with a mainstream newspaper helping fossil fuel companies spin their message. T Brand Studio, a brand marketing unit within the New York Times, has produced pieces for Chevron, Exxon Mobil, and Shell.

At a time when many publications are struggling to stay afloat — and cover the costs of environmental reporting — native advertising is an increasingly important piece of the financial puzzle. The paid features that mimic actual reporting brought in 20 percent of all advertising income for news media organizations in 2017, according to the World Association of Newspapers and News Publishers and the Native Advertising Institute.

But the issue of fossil fuel companies’ massive spending to greenwash their image is quickly heating up as scientific evidence — and unbiased reporting on it — is pointing to the need to phase out fossil fuels as soon as possible. Industry trade groups spent almost $1.4 billion on PR, advertising and communications contractors over the past decade, according to the Climate Investigations Center, almost half of which came from the American Petroleum Institute.

The five largest publicly traded oil and gas companies have spent some $1 billion on “narrative capture” and lobbying since the Paris Agreement was struck in 2016, according to a report published this month by Influence Map. That spending includes $195 million on “often misleading branding campaigns.”

Even before they kicked into high gear to counter the growing public awareness of climate change, some oil and gas companies were engaged in sly, aggressive, and destructive media efforts to counter their opponents.

In 2014, Chevron launched a publication that appears to exist for the sole purpose of defending its refinery in Richmond, California. The refinery had a long history of chemical leaks, fires, dangerous emissions, and unsafe conditions before a leak led to a massive explosion in 2012. The incident sent a “toxic fireball of smoke” over Richmond and prompted 15,000 residents to seek medical help, as the East Bay Express reported after the federal Chemical Safety and Hazard Investigation Board issued its final report on the incident in 2015.

But the Richmond Standard, a local publication Chevron launched in 2013, didn’t cover the report that way — and doesn’t appear to have covered it at all. The Standard “produces news about what is going on in the surrounding community,” according to Braden Reddall, an external affairs advisor for Chevron. And a recent edition of the site, which included an article on the announcement of a date for the coming Little League parade and a review of the local hot dog joint, bears that out.

Despite appearing to be an unbiased news source, the Standard also includes a section of feel-good news about the refinery that includes no mention of the health and safety issues other publications have reported as linked to the refinery. Chevron’s Reddall pointed out in an email that the section on the refinery is “clearly marked as editorial under the ‘Chevron Speaks’ heading.” His email also noted that “The West Contra Costa County region has embraced the publication.”

But not all locals have a positive view of the Standard. “They created it so they could control the narrative,” said Greg Karras, senior scientist at Communities for a Better Environment, a group that has been calling attention to health impacts of the refinery for decades. “When there’s something they want or don’t want and is really important to the business, they want their story about it to get out, rather than rely on independent reporting.”

Chevron seems to have had an even darker purpose in mind when it created the Amazon Post. The website, which has a “breaking news” column and “most read” section, identifies itself in small type as “Chevron’s Views and Opinions on the Ecuador Lawsuit.” But the Post’s real purpose appears to be the targeting of Steven Donziger — an attorney with whom the company has been engaged in a pitched legal battle over massive pollution in the Amazon rainforest in Ecuador for more than two decades.

Chevron’s Reddall says that the company maintains the Amazon Post “to express the company’s views and opinions on a fraudulent lawsuit against the company in Ecuador” and that “the information about Steven Donziger chronicles his long history of illegal activity.”

For his part, Donziger, who was part of a legal team that won a $9.5 billion judgment in the Ecuadorian courts against Chevron over the pollution, says that the Post is just one of the tools the giant energy company has used to personally and professionally destroy him. While three Ecuadorian courts, including the highest court in the land, upheld the judgment, U.S. District Court Judge Lewis A. Kaplan ruled that it should not be enforced because parts of it were “corruptly ghostwritten” in return for the promise of a bribe.

Chevron, which has employed at least 2,000 lawyers and legal personnel from more than 60 firms to work on litigation around the pollution in Ecuador, also filed a lawsuit against Donziger in 2011 alleging that he won the judgment in Ecuador through fraud and racketeering. Kaplan decided the case in Chevron’s favor in a trial held without a jury. And recently that decision was the basis for Donziger having his legal license suspended without a hearing and his bank account frozen. While Donziger has denied that he committed misconduct and contested his suspension in court, the company has delighted over his suffering in the Amazon Post.

There may soon be more fossil fuel company publications entirely devoted to smearing the reputation of individuals, according to Robert Brulle. “They’re likely going to attack Alexandria Ocasio Cortez personally and demonize her. They’ve already begun that,” said Brulle, a sociologist and visiting professor of environment and society at Brown University. “It’s an old strategy — to delegitimize your opponents.”

Brulle also thinks that there will soon be more native advertising from oil and gas companies, which he classifies as “classic propaganda.” “We’re going to see a lot more from API, Exxon Mobil, and other companies,” said Brulle, who notes that the share of oil and gas industry spending on think tanks, such as Heartland, is about a tenth of its expenditures on communications. “As the threat of possible change to the fossil fuel industry increases, they ramp up their resources.”

And of course, change to our energy system is not just possible — it’s necessary.

“Nations have barely a decade to take ‘unprecedented’ actions and cut their emissions in half by 2030 to prevent the worst consequences of climate change,” as a December article about the climate talks in Poland explained. That article appeared in the Washington Post — the real one.