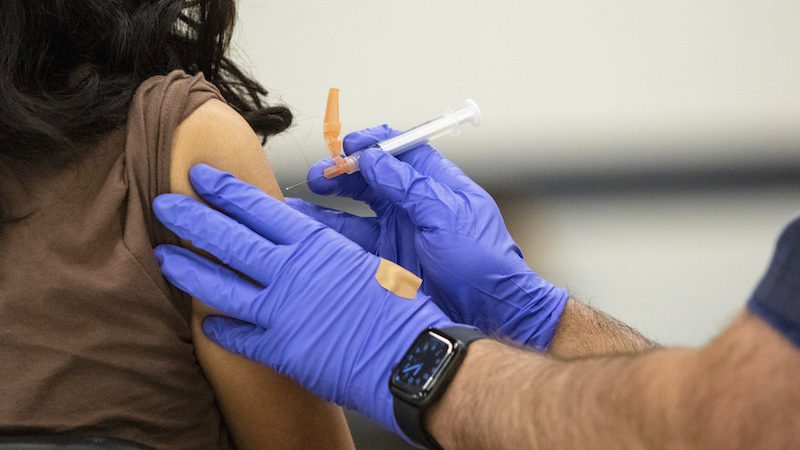 A Fire department health worker administering the COVID-19 vaccine. The Reno Fire department, City of Reno, and Mexican Consulate of Las Vegas partnered up to hold a COVID-19 vaccine event to engage the Mexican and Hispanic community and encourage people to get immunized. Image: Ty O'Neil / SOPA Images/Sipa USA via AP

In New York City’s Chinatown, a city-run vaccination site with no signage or intake questions in Chinese. In California, non-English speakers handed COVID-19 vaccination cards without information on what they mean. In Pennsylvania, people who speak Mandarin, Korean, and Japanese unable to make vaccine appointments due to a lack of interpreters at hospital call centers.

These are just a few of the examples captured in a new complaint filed on Friday to the U.S. Department of Health and Human Services’ Office for Civil Rights, Federal Emergency Management Agency’s Office of Equal Rights, and Department of Homeland Security’s Office for Civil Rights and Civil Liberties. The complaint, brought by the National Health Law Program, finds widespread problems across the country that inhibit access to COVID-19 resources for people with limited English proficiency (LEP).

“Individuals with LEP do not have meaningful access to COVID services (e.g., testing, vaccines, treatment, contact tracing) during this ongoing public health emergency,” the complaint states, noting the effect of those obstacles on vaccination rates. “Lacking information, people do not get vaccines—particularly troubling as the vaccination rates in the United States are now declining.”

Some of the problems stem from websites with missing, inaccurate, or poorly translated information. With many schools, houses of worship, and community centers shut down to prevent transmission of the coronavirus, American life has largely moved online. Public health authorities that might have distributed flyers and brochures at community gathering points in the past are more reliant on online information portals than ever before, which makes the need for these portals to be accessible more urgent than ever.

The Virginia Department of Health was at the center of a scandal this January when it was revealed that the department’s Google-translated Spanish-language FAQ page told visitors “the vaccine is not necessary” for nearly a month. The department eventually corrected the error.

But a new Type Investigations analysis of 50 states’ health department and COVID-19 websites finds that Virginia is hardly the only state that’s failed to properly inform its limited-English speakers about the vaccine. In 11 states, the state health department website has no multilingual resources available on its homepage, not even an option to machine-translate the contents, a likely violation of Title VI of the Civil Rights Act of 1964, which bars federally funded entities from discriminating based on race, color, or national origin. In three states, the COVID-19 websites are English only, with no option for translation. In an additional 18 states, there are language services available, but they’re advertised only in English. Of those 21 states, 62 percent also have higher than average COVID death rates.

These findings are consistent with earlier research that found that three states’ vaccine-finder websites—Alabama, Illinois, and North Dakota—offered no language assistance.

There are 25 million U.S. residents with limited English proficiency. New research shows they are more likely to get COVID-19 and to die from it than are fluent English speakers. And poor language access may be delaying their vaccination: Recent polls have shown that Hispanic people, those earning less than $40,000 per year, and people without a college education—all populations where limited-English speakers are overrepresented—are far more likely than the general public to be unsure whether they are eligible to be vaccinated.

While some states, including Arkansas, Nebraska, and Wisconsin prominently display in-language links from their homepages to translated materials, many have resorted instead to grafting Google Translate onto their websites, something the Department of Justice has described in guidance for federal programs as “strongly discouraged.” As the Virginia example made clear, machine-translation is far from perfect. And when it comes to COVID-19, a mistake in translation can be deadly. Now, advocates like those at the National Health Law Program say something needs to change.

People with limited English “are facing enough challenges trying to navigate our health systems and get the care that they need,” said Mara Youdelman, an attorney with the National Health Law Program. “They need to see information in their language… and not have to continue to fight the uphill battle to figure it out.”

The National Health Law Program’s complaint also calls attention to the problem of machine translation. In Massachusetts, one of the most in-demand languages in acute care hospitals, Cape Verdean Creole, is not available via Google Translate, and across the country readers face awkward, stilted translations and even errors, it states.

Our review of 113 public health websites finds that 68 of them make use of automatic machine translation, either in addition to other accessibility tools or by itself. In all cases where the provider is identifiable, it is Google.

While superficially, the use of machine translation on a website that was formerly English-only might seem like a step in the right direction, “if it’s wrong, it’s not better than nothing,” said Youdelman.

In a statement, a Google representative told us “Google Translate is an automatic translation system that allows for greater information access, but is never intended to replace human translators, and all uses in high stake situations like public health contexts should have translations verified.”

“Translate is not perfect,” the representative continued. It is “not intended to replace human translators.” It’s unclear which, if any, of these 68 websites verify translations using human translators, but given the number of languages on Google Translate, it seems unlikely that most states would have that capacity.

Theoretically, the White House is sympathetic to concerns about language access during the pandemic. In January, as part of a raft of measures in response to anti-Asian hate crimes, President Joseph Biden ordered the Secretary of Health and Human Services to “consider” issuing guidance for COVID-related language access for Asian American communities. More promisingly, perhaps, a bill introduced into the U.S. House in February would instruct all federal agencies that receive coronavirus-related funding to translate their materials into 20 non-English languages.

Any organizations receiving federal money, a category which almost certainly includes all 50 state health departments, are legally bound to provide “meaningful access” to people with limited English. But the standards around when to translate materials or provide interpreters are fuzzy.

In 1974 the Supreme Court recognized that language proficiency is inextricably linked to national origin, so language access fell under the Civil Rights Act’s national origin protection.

The Affordable Care Act reinforced the applicability of those protections to health agencies and programs receiving federal money. Starting in 2016, healthcare providers were required to notify patients of the availability of language assistance by posting a “tagline” on important communications in each state’s top 15 languages spoken by limited-English speakers. But in 2020 the Trump administration removed the regulation and, despite legal challenges, it has yet to be restored.

Meanwhile, it’s very difficult for advocacy groups to fight language discrimination in court. The Supreme Court has ruled that private parties do not have the right to bring cases based on disparate impact rather than intentional discrimination. Instead, individuals and advocacy groups must use administrative venues, like the Department of Health and Human Services Office for Civil Rights to file grievances instead.

A proposed bill, introduced last August in the U.S. Senate, offered a budgetary solution. In addition to requiring federal agencies that have received coronavirus funding to translate their materials into widely spoken languages, the bill would have set aside $200 million for coronavirus-related language access services, the majority of which would be divvied up among state and tribal health departments and community-based organizations. The bill remained in committee when that session of Congress ended. The new version of the bill, which does not include funding, was introduced into the House in February by Rep. Grace Meng of New York. In a press release she called the bill “a necessary—and lifesaving—step that will reach those who may not possess English proficiency.”

Some states are finding ways to reach people in their native tongues. Hayder Allkhenfr, coordinator and program manager of refugee health at the Utah Department of Health, is at the forefront of that push. Originally from Iraq and raised in Egypt, he works with a diverse refugee community that includes speakers of many different languages, including his native Arabic.

When the state of Utah launched its multilingual outreach efforts, it tapped people like Allkhenfr, who are known to, and trusted by, local minority-language communities to record videos explaining COVID precautions, public health directives, and vaccination opportunities. It was important for these videos to come from people with credibility in their respective communities, Allkhenfr says. “It’s much more likely that someone from a refugee background would even click on a video that has a face that they recognize,” he said. Many people with limited English rely on intermediaries, like Allkhenfr, who are fluent in their own language and culture, while also highly informed about public policy, to bridge the communication gap.

Quyen Dinh, executive director of the Southeast Asia Resource Action Center, a Washington, D.C.-based group that advocates for Southeast Asians, is also helping to spread the word. Both Dinh and Allkhenfr said that non-English web materials are often not accessed by limited English-speaking individuals themselves but rather by friends, family, or community members who might then circulate those resources on social media or in WhatsApp group messages. Similarly to English-language social media networks, misinformation and rumor can spread online, and Allkhenfr described efforts to penetrate those networks in order to fight misinformation. Some community members worried the vaccine would cause infertility after a dubious document circulated on social media, for instance, he said.

In addition to providing written and multimedia translated content, the Utah Department of Health has also recruited and trained community health workers. These are typically people with linguistic and cultural knowledge who then receive public health education that they can share with their networks.

Giving those health workers in-language tools that they can use and share is crucial, say Allkhenfr and Dinh, to reach as many as possible. But Dinh says it also serves another purpose:

“It really is about the sense of being invisible in this country and what it means to see your mother language on paper or on a website. It makes a huge difference in terms of feeling like you belong, that you matter.”

Research assistance by Nina Zweig. This story was reported with support from the Puffin Foundation.