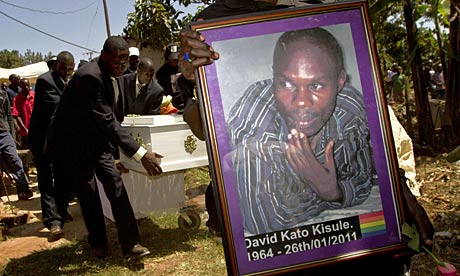 Almost four months ago, a Kampala, Uganda-based tabloid called Rolling Stone (no relation to the American magazine of the same name) published 100 photographs of gay Ugandans, along with where to find them, and warned against “recruitment.” The headline said “Hang Them.”

Five days ago, one of these men, David Kato, a 42-year-old gay activist, was beaten to death with a hammer in his home in Uganda. His photograph had been on the Rolling Stone cover.

David Kato’s murder is part of a disturbing reality: he is not the first to be martyred for his sexuality in Uganda, or in Africa, or even the world, where an estimated 80 countries have laws that criminalize homosexuality. Nor, if the bill drafted in 2009 mandating execution for homosexuals in Uganda is passed, will Kato be the last.

The United States does not have such a law, but the American evangelical movement, and other faith-based, U.S.-funded aid organizations, have been linked to the anti-homosexuality movement gaining ground in Uganda.

A month before the “Anti-Homosexuality Bill of 2009” was introduced, a group of American evangelical Christians came to the Ugandan capital of Kampala for a “Seminar on Exposing the Homosexuals’ Agenda,” and gave a series of talks on “curing” homosexuals and the threats posed by those who engage in homosexual behavior.

Several of these visitors have since tried to distance themselves from the messages they reportedly gave Ugandans, the controversial bill, and Kato’s death. But the investigative work of activists and journalists has revealed the depth of their involvement in Uganda, where nearly 85 percent of the population is either Roman Catholic or Protestant.

Investigative Fund reporter Jeff Sharlet traced the 2009 bill to a secretive branch of the American evangelical movement known as The Family; “Straight Man’s Burden” was published in the August 2010 edition of Harper’s magazine. In December 2009, Sharlet appeared onMSNBC’s The Rachel Maddow Show to discuss the involvement of well-known American evangelicals in Uganda’s anti-gay movement.

Now, a petition initiated by The Human Rights Campaign reports that Georgia-based pastor Carl Ellis Jenkins is opening 50 new churches in Uganda to “preach against ‘bad morals, including homosexuality'” and has plans to expand across East Africa.

Ugandan authorities claimed that Kato was killed by a robber. But people close to Kato, considered one of the founders of Uganda’s gay rights movement, said his life had been threatened.

According to Serra Sippel, president of the Center for Health and Gender Equity, Kato’s death was the result of a culmination of contributions from religious leaders, media, politicians, and prejudiced, U.S.-backed programs that have created a “staggering climate of intolerance” in Uganda.

In 2009, international pressure and threats to cut assistance forced Uganda’s president Yoweri Museveni to indicate an end to the Anti-Homosexuality Bill. Yet the most extreme elements of the legislation remain, and analysts say the bill could pass into law after February’s general election.

There is homegrown condemnation of the bill, as seen in activist Julius Kaggwa’s coalition of twenty-six organizations fighting its passage. Kaggwa testified before the Congressional Human Rights Commission on January 21.

Kato and two others successfully sued Rolling Stone. In January, Uganda’s High Court ordered the magazine to pay hundreds in damages and stop publishing names of people it claimed were gay.

Managing Editor Giles Muhame is unrepentant, telling the New York Times that his paper’s pages were clean of Kato’s blood, saying, “We should not overblow the death of one.”

Meanwhile, President Barack Obama issued a statement on Kato’s murder, saying, “LGBT rights are not special rights; they are human rights. My Administration will continue to strongly support human rights and assistance work on behalf of LGBT persons abroad. We do this because we recognize the threat faced by leaders like David Kato, and we share their commitment to advancing freedom, fairness, and equality for all.”