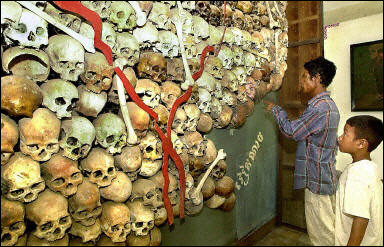 A man shows the skulls of Khmer Rouge victims to a boy in Tuolsleng Genocide Museum in Phnom Penh. | Credit: COURTESY DISMAL WORLD

A Swiss judge announces his arrival. His Cambodian counterpart immediately and publicly refuses to work with him.

Today’s developments in Phnom Penh showed that things remain as a bad as ever for the UN-sponsored office charged with the investigation of Khmer Rouge crimes against humanity, genocide, and war crimes.

As I reported in Foreign Policy on November 23, the UN half of the Khmer Rouge tribunal’s Office of the Co-Investigating Judges — built to serve the millions of victims of the Khmer Rouge, and an office charged with some of the most important criminal investigations pending anywhere in the world — collapsed over the course of this year. Its staff walked off the job in the belief that their superior, Judge Siegfried Blunk of Germany, had attempted to illegally whitewash suspects wanted in connection with hundreds of thousands of executions, forced labor, torture, and a policy of deliberately starving the populace.

Judge Blunk resigned abruptly in October but Cambodian authorities appear to be slow-walking the appointment of his replacement, the Swiss financial crimes investigator Judge Laurent Kasper-Ansermet (whose Twitter feed has attracted considerable notice in Phnom Penh).

In dueling statements issued to the news media today, Judge Kasper-Ansermet and his Cambodian counterpart Judge You Bunleng effectively exposed how unlikely it is that they will ever cooperate actively.

After starting work last Thursday, Kasper-Ansermet announced today that he had taken up his functions and had legal authority to act even though he remains the “reserve” international co-investigating judge.

An hour later, Bunleng stated that his colleague had issued this statement “without any consultation” with him and that to enjoy full powers Judge Kasper-Ansermet must await official appointment by Cambodia’s king, Norodom Sihamoni, a process in reality controlled by the Cambodian government. “[A]ny procedural action taken by Judge Laurent Kasper-Ansermet is not legally valid,” said Bunleng.

On Monday, the court had begun to take evidence in the trial of the three senior-most surviving Khmer Rouge leaders in a highly anticipated case in which Pol Pot’s government itself is under examination.

But the collapse of the two investigations currently before Judges Bunleng and Kasper-Ansermet — cases that are vehemently opposed by the Cambodian government, which views them as a threat to national security — has exposed the court to the criticism that it is unable to follow the evidence and apply the law independently and is engaging in selective justice.

When Judge Blunk resigned amid scandal this past October, the secretary-general’s deputy spokesman Eduardo del Buey said at the noon briefing on October 10 that the United Nations was “working urgently to ensure that the reserve co-investigating Judge, Mr. Laurent Kasper-Ansermet of Switzerland, is available as soon as possible to replace Judge Blunk so that the important work of the ECCC is not disrupted.”

In this, it would appear that so far the UN’s Office of Legal Affairs has been frustrated.

It is possible that Cambodian authorities do not want Kasper-Ansermet to take office because they fear that he may attempt to investigate the cases before him actively, unlike Blunk, who was widely suspected of engineering dismissals.

When Judge Blunk resigned, he said that Cambodian officials’ public remarks had made his work impossible. Cambodia’s Council of Ministers called this a “complete volte-face from mutual collaboration to sudden resignation.”

In a message on Twitter this morning, James Goldston, the executive director of the Open Society Justice Initiative, said that “Conflicting statements by the ‘tweeting judge’ and #Cambodiacountrprt at #ECCC underscore need for more #UN engagement than we have seen.”

The continuing dysfunction of the office and the unaddressed allegations of judicial misconduct leveled at Blunk, who has said little since returning to Germany, also raise the question of whether some kind of reform is necessary for the courts established by the United Nations.

There is currently no independent mechanism to oversee (and if necessary, to discipline) the conduct of judges at any of these courts.

This problem is especially acute at the so-called hybrid courts such as the Cambodia tribunal, where UN judges are called on to collaborate intimately with judges in countries where domestic courts may be less than fair and independent.

Since the Cambodia tribunal is legally a domestic Cambodian court, its judges are subject to the oversight of Cambodia’s Supreme Council of the Magistracy. However, this body is only nominally independent of the Cambodian government.

Furthermore, the mechanisms built into the structure of the Cambodia tribunal to insulate it from outside pressure — particularly its super-majority voting rule, which requires the consent of UN judges for the court to issue rulings — suppose that the UN judges will behave perfectly.

These safeguards are only as reliable as the UN judicial officers appointed to uphold them. There is nothing in the court’s procedures or law to prevent a miscarriage of justice that has the support of someone like Judge Siegfried Blunk.

When Blunk resigned, David Scheffer, the former US Ambassador at Large for War Crimes Issues, put out a statement saying that the resignation was proof that the system worked: “The resignation of International Co-Investigating Judge Siegfried Blunk demonstrates that the ECCC has the capacity to self-correct when confronted with unique challenges.” Ambassador Scheffer is one of the architects of the structure of the court, in particular the super-majority mechanism. So he may have an interest in defending this as a viable model.

But as my story in Foreign Policy showed, Blunk was done in under truly extraordinary circumstances by his own staff, who confronted him in what verged on a mutiny. Such a situation is hardly called for in the court’s procedural rules.

In an e-mail sent to me after Blunk’s resignation, David Tolbert, president of the International Center for Transitional Justice, said the Cambodia tribunal did not have sufficient procedural or legal safeguards to respond effectively to a Blunk scenario and that this experience should not be repeated elsewhere.

Tolbert, formerly deputy prosecutor at the Yugoslav tribunal at The Hague, served in 2008 as the special expert on the Khmer Rouge trials advising UN Secretary-General Ban Ki-moon.

He suggested that some sort of new oversight mechanism should be considered:

There is a lacuna in a number of the international courts, not only the ECCC. Unlike in most respected national systems, there is no established mechanism, including the appropriate and necessary safeguards and protections, for reviewing the conduct of judicial officials for misconduct or for violations of judicial or ethical standards.

The ECCC is built on the assumption that the international judges and prosecutors will safeguard the process as well as uphold the highest standards of integrity; this is the principle behind the super-majority approach. If international judges and/or prosecutors do not provide that safeguard, the system fails and thus justice will not be done. It is a not a system that, in my view and many others, should be replicated in other contexts.