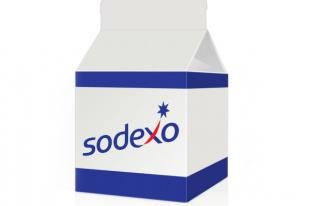 Sodexo | Credit: IN THESE TIMES

At noon on February 17, Jordan Ash, a researcher for the Service Employees International Union (SEIU), along with Josh Downey, a member of SEIU Local 105, had just finished setting up their exhibit booth at the Colorado Convention Center in Denver. It was the annualNational Conference on Education of the American Association of School Administrators, or AASA, the professional organization for more than 13,000 U.S. and international educational leaders. SEIU had bought a booth in order to share the work of its Campaign for Quality Services, a campaign to expose misdeeds by major food service contractors, which SEIU has sought, for years, to organize.

Suddenly Kay Dillon, AASA’s director of corporate and strategic alliances, walked over to the SEIU table and asked if the union could please leave. The AASA would refund the $4,900 they had paid for the booth and a workshop they had bought the right to conduct.

It was several stacks of literature on the SEIU table that had prompted the AASA request, literature related to other exhibitors at the AASA conference: specifically, Sodexo, Aramark, and Chartwells/Compass, the three largest food service management companies that run cafeterias for schools, colleges, hospitals, businesses, and even the military worldwide. SEIU’s materials showed how Sodexo, a French multinational, had cheated American schools out of millions of dollars by exacting kickbacks from food suppliers while charging the schools full price. Sodexo was forced to pay a $20 million settlement to New York State in July 2010 related to these kickbacks.

This account of what happened in Denver is based on interviews with Jordan Ash; Kay Dillon declined to comment for this article.

The request hadn’t come from Sodexo, Dillon assured Ash. (Sodexo spokesperson Jaya Bohlmann, reached later by phone, would not say whether or not the company had intervened.) Dillon explained that SEIU’s materials disparaged other exhibitors, which wasn’t allowed. Ash didn’t know how she knew what was in the literature that had just been stacked; perhaps somebody had brought copies to her.

Dillon and others may have been alerted by an SEIU email to conference participants. Called, “Capture Every Penny: Supplier Rebates and School Food Service Contracting,” it noted that some food service management contractors might not be complying with USDA procurement rules by failing to disclose supplier rebates. It invited participants to a seminar to be led by Barry Sackin, a USDA advisor on procurement training for state child nutrition staffs, “to learn how to protect your district’s finances if you outsource — or are considering outsourcing — food service operations.” Most school districts run their food service operation in-house; but one in five hire food service management companies.

Ash pointed out that at the AASA’s conference the previous year, SEIU had already distributed one of the documents that Dillon now wanted removed: “Cafeteria Kickbacks,” a March 2009 Investigative Fund/In These Times article by this writer that exposed Sodexo’s exaction of those supplier “rebates” which, in violation of federal rules, were not passed on to schools.

But the 2010 conference took place before Sodexo’s settlement with the New York State attorney general, which got a lot of press. So this year was different.

Could he display a letter from the USDA that didn’t mention the companies by name? Ash asked. It instructed education departments to follow the rules on their meal outsourcing contracts. “No,” he recalls Dillon replying, “we don’t want to get into politics.”

The two went through the documents one by one, Ash hoping to salvage a few. But Dillon said she would not permit “anything that mentions companies by name.” She didn’t want the letter from Congresswoman DeLauro [D-Conn] to the Secretary of Agriculture about the Sodexo settlement or any articles about the settlement, including one by the Associated Press.

After a painstaking culling process, all that remained on the SEIU table was a bowl of fresh fruit and a general leaflet from the union called “Taking Control of Your Contract.”

Why would the AASA censor such materials? One reason could be money. The company’s 2008 report to the IRS lists revenues of nearly $10 million, of which more than $3 million come from its convention and advertising and another $3 million from “admissions, merchandise sold, services performed, or furnishing of facilities” related to AASA activities.

I asked AASA spokesperson Kitty Porterfield how much money Sodexo and the other food service management companies contributed to the organization. She replied, “Such information is private to us and these businesses, and it would be inappropriate to disclose their prices, contracts, and business relationships with us or any other party.”

But AASA’s corporate relationships are extensive. Its website advertises that “AASA offers a wide variety of partnership opportunities designed to meet your company’s marketing goals,” from inclusion in the AASA Buyers Guide for Educators to print and electronic advertising, exhibits, and support for meetings, conferences, receptions and special events.

Ash says that Dillon also discussed the workshop by Barry Sackin, refusing permission for Sackin to mention actions by any specific companies, or to discuss food service management companies in general, even if no names were mentioned, Ash concluded that such restrictions would defeat the very purpose of the workshop.

And so SEIU was forced to pull out of the event. The AASA’s corporate exhibitors, Sodexo among them, remained.

What were the documents the AASA banned?

· A press release, “Attorney General Cuomo announces $20 million settlement with food services company for overcharging New York schools.” It listed the cheated school districts and the money they would receive.

· A September 2010 letter from Congresswoman DeLauro (D-Conn) to Secretary of Agriculture Tom Vilsack, which asked him to alert state education and agriculture agencies about the New York Sodexo settlement and to have the USDA Office of Inspector General identify and recover federal funds that might have been misappropriated through illegal procurement practices the settlement identified.

· An October 2010 letter from the New Jersey Attorney General’s office to Assemblywoman Linda Greenstein and Assemblyman Wayne DeAngelo, which said, “This office shares your concerns relating to Sodexo, and is taking appropriate investigatory action under the Consumer Fraud Act and the New Jersey False Claims Act.”

· August 2010 articles in The Trentonian and Asbury Park Press, which described the Greenstein-DeAngelo efforts and a town’s plan to audit Sodexo’s records.

· A November 2010 form letter from Kevin Concannon, undersecretary of agriculture for food, nutrition, and consumer services, to the director of the Iowa Department of Education, which reaffirmed “the importance of safeguarding Federal funding in the Federal child nutrition programs by insuring that school food authorities (SFAs) are the beneficiary of any discounts, rebates or applicable credits resulting from procurements made on their behalf by third parties (eg. distributors, food service management companies, etc) through cost reimbursable contracts.”

· A January 2011 letter from New Jersey Assemblyman Patrick Diegnan to the South Plainfield Board of Education president, which suggested an independent audit of Sodexo contracts.

AASA declined to grant an interview for this article, but Porterfield, the AASA spokesperson, emailed the following statement:

AASA was not prohibiting the Campaign from delivering its message, which AASA understood to be that, in contracting with outside vendors, a school system should be diligent in reading and understanding the agreement. This is an appropriate message for AASA members to hear, and AASA welcomed the Campaign’s desire to deliver it. AASA simply asked the Campaign to carry on a discussion in a way that would uphold the integrity of the trade show and not devolve into name-calling.

However, Porterfield would not discuss the conversation between Dillon and Ash, the alleged distortions, or even allow an interview with Dillon. AASA also declined to address the censorship issue — a lesson that educators might want to ponder.