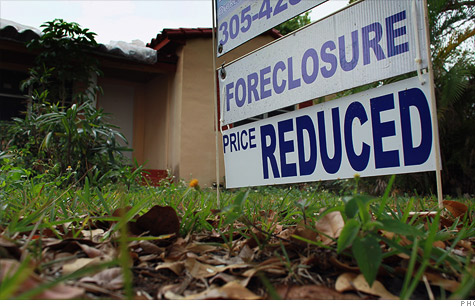 Some states are using their mortgage settlement payouts to bolster their budgets.

On February 9, to much fanfare, President Obama announced an approximately $25 billion National Mortgage Settlement with five of the country’s largest banks, JP Morgan Chase, Bank of America, Ally/GMAC, Wells Fargo, and Citi. It is the largest multi-state settlement regarding the mortgage meltdown since the $8.68 billion Countrywide Settlement in 2008. But the excitement is misplaced — it is not clear yet whether the deal has been finalized, and the actual settlement that the federal government and 49 attorneys general have apparently reached with the banks has not been released.

The ostensible purpose of the settlement is to resolve violations of federal and state law and to help a percentage of the 11 million borrowers who are in debt to the tune of more than $700 billion. In addition, the settlement is to provide aid to those who have lost their houses because mortgage servicers working for the banks filed incomplete, and potentially fraudulent, foreclosure documents.

However, according to Prentiss Cox, a professor at the University of Minnesota Law School, the $25 billion national mortgage settlement may end up functioning more as loss mitigation for the five banks than as relief for underwater borrowers.

The former Assistant Attorney General and manager of the Consumer Enforcement Division in the Minnesota Attorney General’s Office, Cox said in an interview last week, “I think that the money could be entirely illusory. It is the same mistake we made with HAMP [the Home Affordable Modification Program]. It is all the same problem — we do a program that has some general incentives to it and then we leave it up totally to the lenders as to who gets the money and how the money is allocated.”

Indeed, there already appear to be major holes in the settlement. One of the most outrageous is that the banks may be allowed to receive taxpayer subsidies for their cooperation. Last week, the Financial Times reported that the settlement’s provisional agreement contained a clause which allows the banks to count loans made under the taxpayer-subsidized federal HAMP toward compliance with the new settlement. If that provision is indeed part of the final settlement, it means that the banks would be eligible to receive taxpayer-financed incentives for making loan modifications under a settlement intended to resolve allegations that they broke federal and state laws. But that means the banks may receive financial incentives simply for agreeing to pay for their alleged wrongdoing.

This past weekend, however, New York Times columnist Joe Nocera reportedthat both Attorney General Tom Miller of Iowa, one of the leaders of the settlement talks, and the U.S. Department of Housing and Urban Development, the lead federal agency involved, said that the Financial Times got the story wrong. (Without the final settlement in hand, it is one word against another.)

Then there is the audit by San Francisco county officials of 382 foreclosures, which recently found that almost all of the foreclosures examined involved legal violations or suspicious documentation. According report for the audit, the National Mortgage Settlement does not address suspicious patterns of activity that indicate mortgage servicers may knowingly have filed false or forged foreclosure documents, which is a felony in the state of California.

So where should homeowners in danger of losing their houses go for information about the still–to-be-released settlement? The press release at the US Department of Justice website is a good start. It directs visitors to www.nationalmortgagesettlement.com, with the disclaimer that it takes no responsibility for the accuracy or legality of the information on that website.

According to the settlement’s executive summary, the banks have won a broad release from future litigation by state attorneys general and the US Department of Justice for claims related to mortgage servicing abuses, foreclosure preparation, and loan origination.

In exchange, lawmakers have wrung a $25 billion commitment from the banks. However, the only hard money that the banks have to pay is $5.2 billion, which will be devoted to foreclosure relief, housing programs, and paltry $2000 payments to borrowers who were improperly foreclosed upon. Refinancing for borrowers who are current on their payments but cannot refinance because of they owe more than their homes are worth, accounts for another $3.5 billion.

The remaining $17 billion will not come directly out of bank coffers, but will in fact be in the form of write-offs on loans, many of which the banks likely would not be able to collect. This includes credits for principal write-downs for underwater borrowers and waiving of deficiency judgments on people who have already been foreclosed upon.

Seventeen billion dollars may sound impressive, but don’t break out the champagne yet. Homeowners in this country still owe $700 billion more than their houses are worth. Consider that most recent statistics from the Treasury Department show that close to 1.6 million borrowers are seriously delinquent on their mortgages and another 1.3 million are in some stage of foreclosure. It is clear that the banks and investors behind the mortgage-backed securities that own these troubled mortgages will have to write off a lot more than $17 billion by the time this crisis is over, with or without a settlement.

Another major component of settlement is what the executive summary terms “comprehensive reforms of the mortgage servicing industry,” which includes the overhauling of servicing standards.

One of the new servicing standards is that “information in foreclosure affidavits must be personally reviewed and based on competent evidence.” Another: “Holders of loans and their legal standing to foreclose must be documented and disclosed to borrowers.” Sounds great. But why wasn’t this already standard operating procedure at these five banks?

In addition to the seemingly generous terms extended to the banks, the executive summary is short on specifics. We don’t know whether the settlement contains major loopholes for the banks to escape liability for violating the settlement’s terms. We don’t know if the terms of the actual modifications that the borrowers receive will be so bad that many of them might re-default the following year — as has been the case with other loan modification programs. And we don’t know what the financial hit will be for the banks versus the investors in those mortgage-backed securities, which include major pension funds, that actually own most of the mortgages at issue.

That the actual settlement document is not public is a major problem, because the proverbial devil is always in the details. I discovered that in 2010 when I was working on anInvestigative Fund article for the Nation magazine about the troubled 2008 Countrywide Settlement. The settlement was intended to resolve a predatory lending lawsuit that 11 state attorneys general had brought against the country’s largest lender.

Press releases issued in 2008 claimed that the Countrywide settlement would provide up to $8.68 billion in relief to an estimated 400,00 borrowers.

However, the 2008 settlement, which some media accounts touted as the “largest loan modification in history,” brought more consumer complaints than relief. From what we know thus far about the National Mortgage Settlement, it appears to be in danger of turning into a fiasco similar to the Countrywide Settlement.

In fact, in December 2010, two months after my article was published, the states of Arizona and Nevada sued Bank of America for predatory mortgage servicing and charged that the banks had violated the Countrywide settlement by foreclosing on borrowers while their modifications were pending. In their complaints, the two attorneys general also charged that Bank of America used inaccurate and deceptive practices to deny modifications to borrowers who were supposed to be receiving help under the Countrywide Settlement

How widespread were the violations of the 2008 Countrywide Settlement? That we will never know. Although there were numerous complaints, only two of the forty-four states plus the District of Columbia that eventually signed onto the settlement sued the bank for violating its terms.

However, the current National Mortgage Settlement appears to have put an end to further law enforcement investigations over alleged violations of the 2008 Countrywide Settlement.

Under Nevada’s settlement, the eligible Nevada homeowners are supposed to receive $750 million in first and second lien principal reduction and the bank is obligated to suspend foreclosure sales of any borrower eligible for modifications.

The current attorney general of Arizona, Tom Horne, who inherited the Countrywide lawsuit from his predecessor, settled with Bank of America for a paltry $10 million fine, which is to be used for a variety of initiatives such as enhancing efforts to prevent and prosecute financial fraud.

Terry Goddard, the former Arizona attorney general who was one of the lead negotiators of the Countrywide Settlement, and who two years later sued Bank of America over its alleged violations of the settlement, was quoted in the New York Times yesterday about the unresolved issues.

“The problems haven’t been rectified and borrowers continue to get the runaround,” she said. “It was not successful, and I hope it’s a powerful lesson about what needs to be done in this agreement. Trust, but verify.”

Let’s hope that the new National Mortgage Settlement does not have as many loopholes as the Countrywide settlement did. And let’s hope that state attorneys general are more aggressive in pursuing any potential violations of the current settlement’s terms. However, based upon the information available thus far, there is no reason to be optimistic about the ability of the new settlement to meet its objectives of helping distressed homeowners.