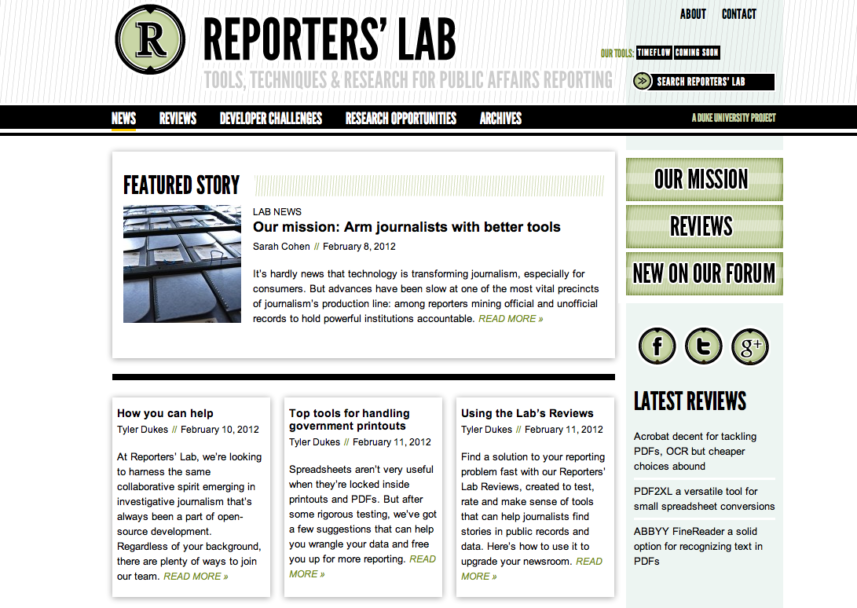 Sarah Cohen wants to make it easier for you to be an investigative journalist. And she should know about that: she’s won almost every major journalism award there is. Now, in hercurrent role as Knight Professor of the Practice of Journalism and Public Policy at Duke University’s school of public policy, Sanford, she’s just this week launched Reporters’ Lab, an exciting new website that aims to be “a home for techniques, tools and research” to support investigative and public affairs journalism.

What that means exactly is that Cohen and her small team are going to review the available tools so that reporters can quickly tell what would work best for them; develop new tools where they see a need; and give all this away free of charge and open-source for cash-strapped newsrooms, independent reporters, and anyone else who they determine is “committing acts of original journalism on a regular basis.”

“I was hired as a computational journalism Knight Chair,” Cohen says over the telephone, “and all this began as a way to think about sustainability in investigative and public affairs reporting: how to sustain revenues and yet decrease the costs of journalism.” With more than a decade of investigative reporting under her belt, she says, she was familiar with the everyday problems that journalists face. They often waste time listening to audio or watching video of, say, Board of Education meetings as there are no transcripts available. Or the government might put up a database online but it’s not searchable in the precise way that a journalist needs. Or a source might send valuable information in the form of a PDF rather than a spreadsheet. “I want reporters to do more journalism and less drudgery,” Cohen says, a sentiment that everyone, no doubt, can get behind.

Reporters’ Lab already has their first tool: TimeFlow, available for free download in an Alpha version. Cohen worked with two visualization experts to design this visual reporting tool that helps reporters build chronology. “We found there were tools available to help with place, but not with time,” Cohen explains. “For instance, if you’re reporting a long drawn-out court case, or following the BP oil spill, one day you need to know everything that [ex-BP head honcho] Tony Hayward said on the subject, and another you need to know the effect on the local birds. TimeFlow makes it easy to sort your notes using color, using source names, etc.” All the reporter has to do is “tag” their notes that way. “Bookwriters could use it,” she offers. The tool has been available for a year and a half already — predating the launch of the website by a year and a half, give or take a few days — and, Cohen says, does a very good job of what it was designed to do. She now wants to tinker with it to also work as a publishing, in addition to a reporting, tool, so that writers could pick out bits from their notes and be able to publish them directly.

The experience of building TimeFlow — her first project as Knight Chair at Duke — was what convinced her that she needed a more formal organization, one that was staffed and properly structured, to be a home for these tools.

After TimeFlow, their next project will be rolled out over the next month or two: the exciting-sounding Video Notebook that attendees of the 2012 Computer-Assisted Reporting conference by Investigative Reporters and Editors — where Cohen is a board member — got a sneak peek of at today’s panel. Say a reporter is transcribing from a video or audio file; when they stop to take notes, the file would automatically stop playing. (Did we hear several whoops and a relieved “Finally!”?) When our hypothetical reporter is ready to continue, the video would resume at the same place it left off. Suppose a reporter is live tweeting a government meeting and is unable to take notes. The video of the meeting is posted online the following day, but no transcript. The reporter would be able to use the previous day’s tweets to navigate the video, or find the right spot in it simply by searching for a speaker’s name.

This is on the cards, but what’s a good reporting tool already out there? Document Cloud, Cohen suggests. It’s gotten a lot of traction among those who need to publish documents, she says, but not enough among reporters. “Document dumps are the bane of our existence,” she adds, and it’s frustrating when reporters are presented with boxes and boxes of papers and they have no way of knowing what’s inside. What’s missing is an affordable — or free! — web scraping tool. If the government puts a searchable database online, but a reporter is unable to find the information they’re looking for because it’s not presented in the right way or they don’t know the appropriate keywords, a web scraping tool could help. One does exist, but it costs a steep $40,000 a year and is used mainly by companies. Filling that hole for reporters is something that Cohen is thinking about for her next project.

“It’s the low-hanging fruit,” Cohen says. By developing these tools, Reporters’ Lab will be “saving a lot of people a lot of time.”

The project is currently being funded by Duke University to the tune of $300,000. Cohen expects the money to last for a year and a half, after which they will probably need to raise more funding. They’re also looking to build a community of web developers and visualization experts so if you knew what web scraping was without having to look it up on Wikipedia (I didn’t), you can offer your services here. Either way, check them out and check back frequently: they might just have what you’re looking for in their magic bag of tricks.