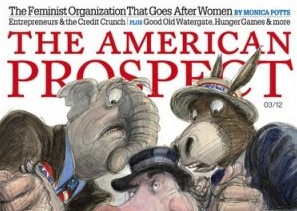 The March 2012 issue of the American Prospect

This Monday, news broke that if the independent, Washington-based American Prospectdoesn’t raise $500,000 by the end of this month, the magazine will be forced to drastically scale back, or even close its doors. After making a significant investment last fall in overhauling its website, improving its reportage, and revamping its social media outreach, the publication was counting on “some big gifts” that have fallen through, and is now struggling to survive.

Facing a massive funding gap, this is, “quite literally, do or die,” Kit Rachlis told the progressive, nonprofit magazine’s readers and friends in an email appeal, but they’re fighting tooth and nail for the former. Larger donors have pledged to fill $300,000 of that deficit, but only if the American Prospect‘s readers, supporters, and friends rise to the occasion, and contribute the remaining $200,000.

Founded in 1990, the magazine aimed to “demonstrate that progressive ideas could animate a majority politics,” and it has since become an authoritative voice in the liberal media. Just last month, Gabriel Arana, an AmProspect editor and former Nation intern, published “My So-Called Ex-Gay Life,” the article that that effectively demolished the dominant scientific study that has been used justify damaging ex-gay therapy — and received the highest web views in the magazine’s history.

Over the past five years, the AmProspect has published a number of important Investigative Fund stories, including, just this past March, Christopher Ketcham’s “Wolves to the Slaughter,” an investigation into the political jockeying behind the declining gray wolf population in the Northern Rockies. In 2009, they published “There Goes the Neighborhood,” Alyssa Katz’s report on the damaging role of housing speculators, which won that year’s Harry Chapin Media Award on poverty and hunger, and in 2008, a meticulous, collaboratively written article on the actions of the Bush administration, “How Bush Broke the Government,” among others.

Progressive media is a small, interconnected community (for instance, Nation Institute fellows Jamelle Bouie and Dana Goldstein are regular contributors at the Prospect). Losing theAmerican Prospect would be a big blow to independent media. Jonathan Cohn (a formerAmProspect editor) began his New Republic blog about his former employer’s financial troubles with this sentence: “A member of the family is in trouble.” In today’s polarized political climate, we need to protect the kind of critical journalism that the AmProspect has consistently produced over the past twenty years.

In an incredible show of support, donors have contributed more than $109,000 in the past five days. You can help that number grow by donating here.