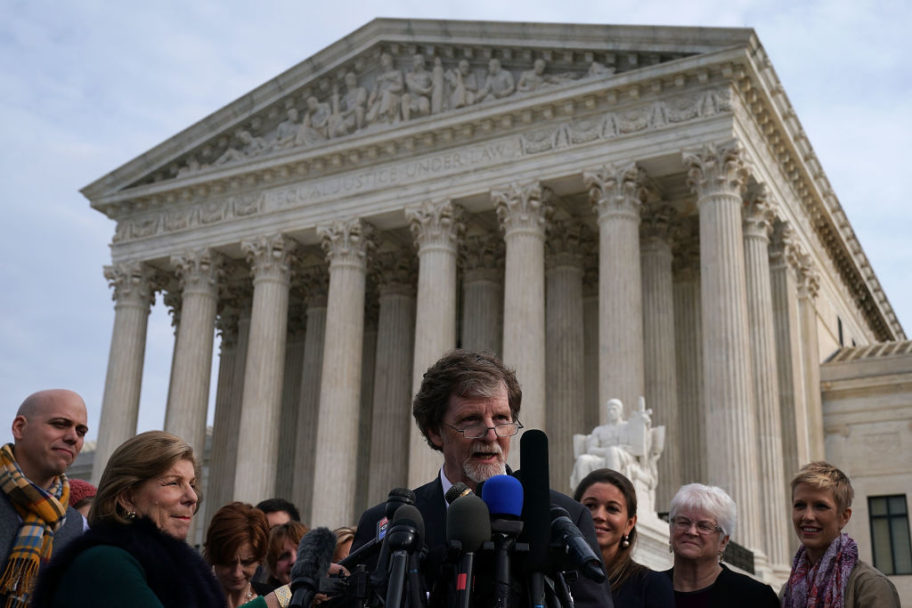 Jack Phillips speaks to members of the media in front of the U.S. Supreme Court on December 5, 2017. Image: Alex Wong/Getty Images

Today the Supreme Court heard arguments in Masterpiece Cakeshop v. Colorado Civil Rights Commission, one of the most scrutinized cases on the docket this term. The Court will decide whether Jack Phillips, a Christian baker, has a First Amendment right to refuse to make a wedding cake for a gay couple on religious or free-speech grounds, even though Colorado’s public-accommodations law prohibits discrimination on the basis of sexual orientation.

A ruling in Phillips’s favor, depending on its scope, could open LGBTQ people up to a wide range of discrimination in daily life in nearly any retail or service setting. It is also a test of a core foundational principle of the Christian-right legal powerhouse, Alliance Defending Freedom, which represents Phillips and maintains that Colorado’s law is unconstitutional as it was applied to him. As we reported last week, ADF has long argued that LGBTQ rights endanger the religious freedom of Christians. In the wake of the landmark ruling in Obergefell v Hodges (2015) in favor of marriage equality, Masterpiece Cakeshop represents the first test at the Supreme Court of ADF’s claim that religious objectors should have the right to refuse to serve same-sex couples.

Remarkably, ADF found a sympathetic ear not just from the four conservative justices on the Court—but also from Justice Kennedy, the author of four historic opinions extending gay and lesbian rights, including Obergefell itself. Along with Justices John Roberts, Clarence Thomas, Samuel Alito, and Neil Gorsuch, Kennedy appeared receptive to ADF’s claim that proponents of LGBTQ equality are motivated by religious animus.

The most revealing exchange on this front occurred when Kennedy pressed Colorado Solicitor General Frederick Yarger not about the law itself, or its legislative history, but rather about a single statement made by one member of the state’s Civil Rights Commission in 2015, when the original case was being litigated. At a hearing then, Commissioner Diann Rice said, “Freedom of religion and religion has been used to justify all kinds of discrimination throughout history, whether it be slavery, whether it be the [H]olocaust, whether it be—I mean, we—we can list hundreds of situations where freedom of religion has been used to justify discrimination. And to me it is one of the most despicable pieces of rhetoric that people can use to—to use their religion to hurt others.”

As Masterpiece Cakeshop has moved through the courts, ADF and other conservative groups have been aggressively promoting the quote as evidence of the Commission’s anti-religious sentiment, claiming that one commissioner compared Phillips “to Nazi [sic].”

But the statement does not evince a hostility to religion itself, only opposition to the invocation of religion to justify discrimination. Nonetheless, Kennedy and others seized on it to suggest that fears of anti-Christian bias might indeed be real. He pressed Yarger to disavow Rice’s statement, which eventually Yarger did. Still, to Kennedy, the entire case appeared to be tainted.

“Suppose,” Kennedy pressed, “we thought that in significant part at least one member of the Commission based the commissioner’s decision on a hostility to religion.” He asked Yarger. “Could your judgment still stand?“ Justice Samuel Alito jumped in as well, telling Yarger that there “appears to be a practice of discriminatory treatment based on viewpoint.”

Such questioning of counsel by Kennedy and the conservative justices showed just how much a perception of hostility to religion, even based on a thin reed of evidence, could potentially tip the case in Masterpiece’s favor. “Tolerance,” Kennedy bluntly told Solicitor General Yarger, “is essential in a free society. And tolerance is most meaningful when it’s mutual. It seems to me that the state in its position here has been neither tolerant nor respectful of Mr. Phillips’ religious beliefs.”

But as Yarger and the ACLU’s David Cole (also The Nation’s legal-affairs correspondent) pointed out, like other public-accommodations laws, Colorado’s is a generally applicable law that wasn’t directed at restricting religion but rather identifies classes—such as race, sex, national origin, sexual orientation, and, notably, religion itself—to be protected from discrimination. As Justice Sonia Sotomayor told United State Solicitor General Noel Francisco, who was arguing in support of Masterpiece, the motivation for such laws is not antipathy to religion. “We’ve always said in our public accommodations law we can’t change your private beliefs, we can’t compel you to like these people, we can’t compel you to bring them into your home,” she said, “but if you want to be a part of our community, of our civic community,” the state can legitimately legislate against discriminatory behavior.

But Kennedy worried that one of the remedies Colorado enforced—that Phillips had to train the bakery staff that the law in Colorado prohibits discrimination based on sexual orientation—further infringed on his religion. Phillips had to tell his family, Kennedy said, “that state law, in this case, supersedes our religious beliefs.” Justice Gorsuch suggested the training might be “compelled speech and possibly in violation of his free-exercise rights” because he would have to tell his staff and family “that his Christian beliefs are discriminatory.”

While the conservative wing appeared sympathetic to Phillips’s free-exercise-of-religion claim, the liberal wing bombarded ADF attorney Kristen Waggoner with questions about his free-speech claim. ADF argues that Phillips’s creating a wedding cake is “artistic expression” that and application of the Colorado public-accommodations law amounts to compelled speech, in violation of the First Amendment’s free-speech clause. The liberal justices peppered Waggoner with questions about what sorts of other wedding vendors would be considered artists whose expression should exempt them from the reach of nondiscrimination laws. What about hair stylists, jewelers, tailors, and makeup artists? The latter are, after all, said Justice Elena Kagan, to rare laughter in the courtroom, artists.

But defining who is an artist may not end up mattering. Waggoner and Francisco also focused the Court on the distance between discrimination against a gay couple per se, and Phillips’s refusal to make the cake for a wedding. The state cannot, argued Francisco, tell an African-American sculptor that he has to sculpt a cross for a Klan service. Gorsuch pressed a similar hypothetical to the ACLU’s David Cole, who argued on behalf of the same-sex couple, Charlie Craig and David Mullins. Cole pointed out that the Klan is not a protected class under any non-discrimination law, so it would be perfectly legal to refuse to serve it. But by transforming the case into one about “messages,” and not being compelled to deliver a “message” that contradicts one’s conviction, the conservative justices could elide the entire purpose of nondiscrimination laws: to protect individuals who belong to classes of people long subject to discrimination from the ongoing indignity of it.

The debate over whether Phillips refused to serve an event rather than people appeared to pique Kennedy’s interest as well. “Your identity thing is just too facile,” he told Cole. In other words, it’s about religious beliefs against same-sex marriage, not discrimination against a gay couple. “He [Phillips] says but I just don’t think they should have a marriage because that’s contrary to my beliefs,” said Kennedy. “It’s not their identity. It’s what they’re doing.”

This article was reported in partnership with the Investigative Fund at the Nation Institute and first appeared on the Nation and is reposted here with permission.