Alexandra Poolos is an associate producer of 60 Minutes on CBS. She is a graduate of the Columbia University Graduate School of Journalism. She has worked for CNN, Radio Free Europe, National Public Radio, Women's eNews, the Wall Street Journal, the American Prospect and Newsday. She has covered international stories in the former Yugoslavia, Rwanda, Russia and Central Asia. She is currently based in New York. Last updated July 2017 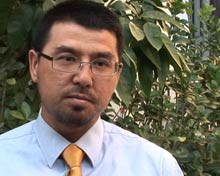