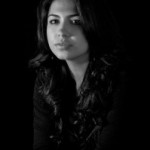 Diana Markosian is an Armenian-American photographer whose work explores the relationship between memory and place. Born in the former Soviet Union, her family immigrated to the United States when she was a child, leaving her father behind. In 2010, she received her master's degree from Columbia University's Graduate School of Journalism. Her images can be found in publications like National Geographic Magazine, The New Yorker and The New York Times. In 2016, she became a Magnum nominee.