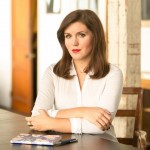 Jill Filipovic is a contributing opinion writer for The New York Times and a regular columnist for Cosmopolitan.com, where she was previously a senior political writer. A former columnist for The Guardian, she is also an attorney and author of The H-Spot: The Feminist Pursuit of Happiness (Nation Books). Her work on law, politics, gender and foreign affairs has appeared in The Washington Post, Time, The Nation, Foreign Policy and others. Last updated October 2017