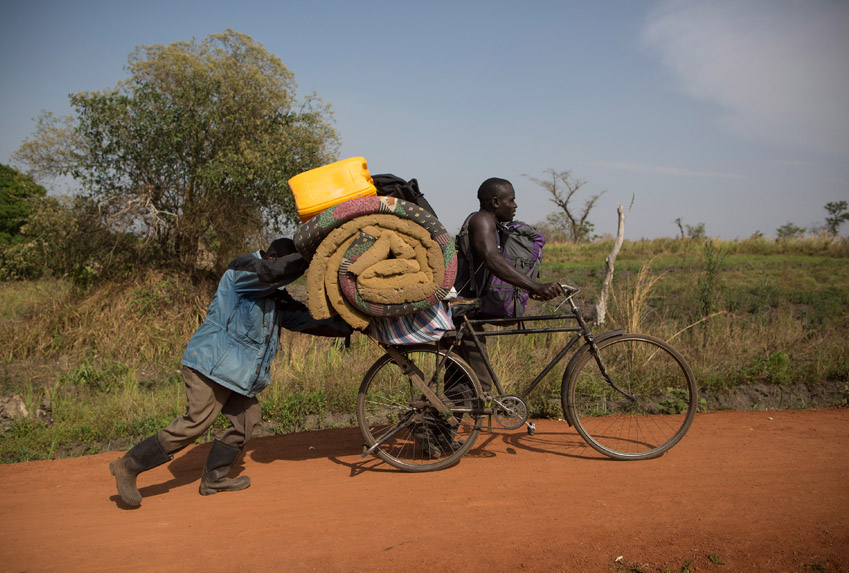 South Sudanese refugees push their belongings up a hill after crossing a small wooden bridge over a river from South Sudan into Uganda on February 24, 2017. Image: Dan Kitwood/Getty Images

It’s almost behind us. 2017. But before it slips completely away, pour yourself a cup of coffee and settle down for a good long read, because we made an “In Case You Missed It” reel for you — stories that we feel grappled with some of the most important issues of our time. In the past year, we have covered the rise of fake news on Twitter, the sale of public lands to the oil and gas industry, the underreported use of seclusion and restraints for special ed students, deadly private prisons, and much, much more. We selected 10 that we feel represent the subjects dominating the national discourse. Read on…

In the months before the 2016 election, we paired two veteran reporters on the hate beat, Sarah Posner and David Neiwert, to delve into the Donald Trump’s campaign to mainstream hate.

Black and Latino officers have long been rare voices of dissent within the New York City Police Department, which is predominantly white at its highest levels. Saki Knafo profiled Edwin Raymond, who, despite intimidation from within the NYPD, fought against his department’s continued encouragement of arrest quotas, which disproportionately affect residents of color.

Sexual Harassment: Out Here, No One Can Hear You Scream

Kathryn Joyce reveals the dangers of a culture of male entitlement and hostility hiding in the U.S. Parks and Wildlife Department and the Forest Service.

Corporate America: Government by Goldman
Veteran Wall Street reporters Gary Rivlin and Mike Hudson revealed ex-Goldman president Gary Cohn’s reckless work at the financial behemoth, and how his radically deregulatory agenda at the White House could destabilize the economy — and make billions for his former firm.

Terrorism: Home Is Where the Hate Is
In a comprehensive analysis of nine years of domestic terrorism incidents, David Niewert found that, despite fears over Muslim extremism, the far greater threat stems from right-wing actors.

Immigration: Life and Death at the Border
John Carlos Frey documents human rights abuses at the border through the heartbreaking story of 16-year-old Cruz Velasquez from Tijuana, who died of a massive overdose encouraged by border agents.

International coverage: Ghost Nation
“In his heart, Simon Yakida knew he was digging his own grave.” So begins Nick Turse’s compelling report from South Sudan, a nation birthed just six years ago and midwifed by the United States. For this compelling feature, Turse interviewed some 250 refugees who bear witness to a spike in violence since November.

Reproductive Rights: With Child
South Dakota is among the most difficult places in the United States to end a pregnancy. Kiera Feldman follows the desperate search for an abortion by women looking for help in a state where medical professionals can refuse to provide one, even in a medical emergency, without facing any liability.

Judiciary: The Christian Legal Army Behind “Masterpiece Cakeshop”
Our expert reporter on the Christian right, Sarah Posner, dug into the Alliance Defending Freedom, a Christian nonprofit whose mission is to defeat the “homosexual agenda [that] threatens religious freedom,” whose lawyer defended the Colorado baker who refused to bake a wedding cake for a gay couple.