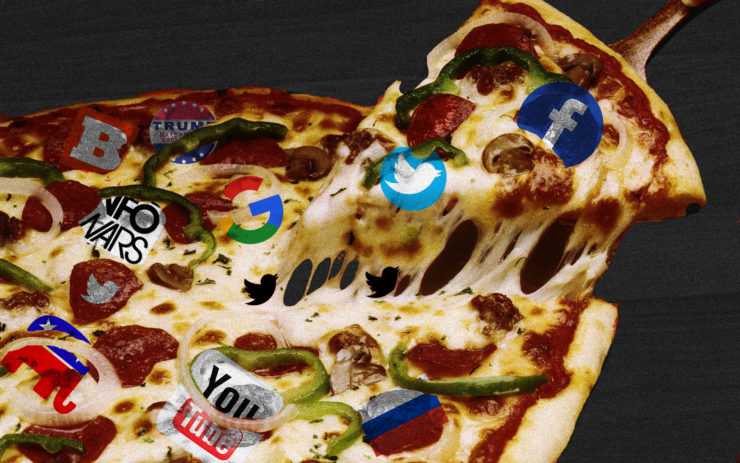 This week, we teamed up with Rolling Stone and The Investigative Fund to explore how fake news starts, snowballs, and sometimes erupts into gun-fire.

They weren’t. But that didn’t stop one armed man from traveling to the restaurant and firing three times during the busy Sunday rush, looking for a basement that doesn’t exist.

The episode opens as Reveal producer Laura Starecheski joins The Investigative Fund’s Amanda Robb in an attempt to track down the people responsible for starting the hoax. Their reporting takes them to Joplin, Missouri, in search of the woman who may have launched Pizzagate on Facebook.

Next, Robb heads to Macedonia (one of the “fake news capitals of the world”) to better understand who profits off viral hoaxes. She finds that many fake news purveyors have no political bias or ideology; they’re just hoping to make some money in a country where jobs are scarce. With their help, and with a surprising assist from American fake news sites like Breitbart and The Blaze, Pizzagate rocketed from a fringe idea into the mainstream conversation.

Finally, our reporters take a close look at automated social media accounts, also known as bots, which have become part of the political landscape. To what extent did these bots help spread Pizzagate? And were any of them tied to fake social media accounts run by Russian propagandists? Reveal cyber security reporter Aaron Sankin answers that question.

Ultimately, the story shows how fake news can have real consequences.

“My name has been torn to shreds,” Comet Ping Pong owner James Alefantis said. “And then there are all these other people that continue to perpetrate these conspiracy theories and lies online and there are absolutely no repercussions for these people and I wonder when they will be held accountable.”

Laura Starecheski is a reporter and producer for Reveal.