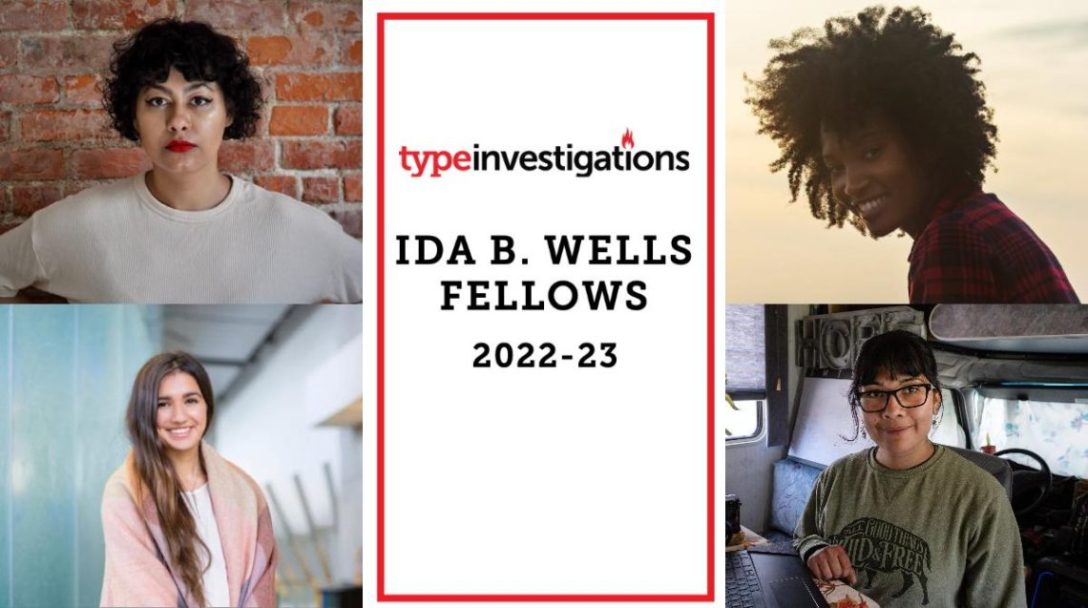 New York, New York, June 6, 2022 — Type Investigations is pleased to announce the 2022 Ida B. Wells Fellows. This year’s fellows will report on a range of issues, including domestic homicide prevention, migrant rescue practices, homelessness in the Bay Area, and the impact of agricultural policies on Black farmers.

“These journalists bring a wealth of experience, expertise, and dedication to their work,” said Noy Thrupkaew, the new director of the Ida B. Wells Fellowship program, who is also a reporting fellow at Type Investigations. “Reporters with deep connections to and knowledge of the complex issues impacting different communities are vital to the field of investigative journalism.”

Each of the four emerging and mid-career journalists receives a $25,000 stipend, plus funds to cover reporting costs for their first substantial piece of investigative reporting. During the year-long program, the cohort has access to intensive editorial feedback, research support, fact-checking, legal counsel, and assistance with story placement and publicity.

Now in its seventh year, the Ida B. Wells Fellowship also includes a Southern Fellow, drawn from a nine-state region in the south, where Ida B. Wells was from and where her anti-lynching reporting was based.

Past fellows have won prizes for their reporting, and gone on to work at top newsrooms across the country including the Associated Press, the Washington Post, Grist, PBS, and more. Fellowship investigations have helped drive legislative change, inspire public initiatives, and spark public hearings.

Learn more about the Ida B. Wells Fellowship program and past fellows here.

TANVI MISRA
Tanvi Misra is a freelance writer and multimedia journalist primarily covering migration, urban policy, and criminal justice. Her work has appeared in The Atlantic, The Baffler, the BBC, Bloomberg CityLab, The Fuller Project, The Guardian, The New Republic, NBC News, NPR, and Teen Vogue. Her writing spans genres, ranging from magazine features and essays to political analyses and investigations. She has also reported, written, and voiced radio series, podcast segments, and investigative audio features. Tanvi is a 2022 Ira A. Lipman fellow at Columbia University where she is working on a feature about the experiences of unaccompanied migrant girls. As an Ida B. Wells fellow, she will be investigating the conditions worsening the missing migrants crisis at the U.S.-Mexico border.
Twitter: @Tanvim

SAFIYA CHARLES
Safiya Charles is our Southern fellow. A Montgomery, Alabama-based writer, Charles covered the movement around justice for Black farmers at The Counter, and wrote about race and politics for The Montgomery Advertiser, the Alabama capital’s daily newspaper. Her work has also appeared in The Nation and The New Republic. She will be reporting on the impact of U.S. Department of Agriculture policies on Black farmers.
Twitter: @imsafiyacharles

YASMIN RAFIEI
Yasmin Rafiei is an investigative journalist who focuses on healthcare and health policy reform. She is currently a reporter in residence at Berkeley’s Investigative Reporting Program, as well as a medical student at Stanford University. Rafiei has worked as an advisor to Canada’s COVID Task Force; an analyst at Chatham House, the global-affairs think tank; and completed studies in politics, philosophy, and economics at Oxford University as a Rhodes scholar. She has written for The Guardian, Foreign Policy, The Globe & Mail, and The New England Journal of Medicine, among others. Rafiei will report on domestic homicide prevention.
Twitter: @YasminRafiei

YESICA PRADO
Yesica Prado is a journalist and artist based in Berkeley, California. A first-generation Mexican immigrant from Nezahualcoyótl, Mexico, Prado focuses her reporting on issues that limit people’s access to land, such as immigration, homelessness, and Indigenous status. As a former CatchLight local fellow, she documented the experiences of residents living in their vehicles as they work to protect their communities from policies that restrict their movement and essential life activities. Currently a staff reporter at the San Francisco Public Press, Prado has a BFA in photography from the University of Illinois at Chicago, and a master’s in journalism from the UC Berkeley Graduate School of Journalism. She will report on homelessness in the San Francisco Bay Area.
Twitter: @Prado_Reports