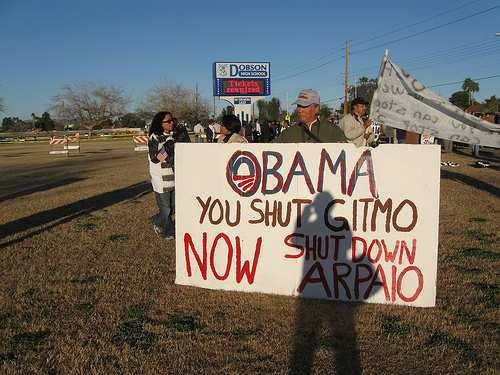 The Supreme Court’s decision to uphold Arizona’s employer sanctions law yesterdayovershadowed yet another blow against Maricopa County Sheriff Joe Arpaio. Anyone keeping track of major scandals surrounding the infamous sheriff already knows that Arpaio has embezzled $100 million and that his department has bungled more than 400 sex crime cases — defrauding his voters of their money and ignoring violent sex offenders in exchange for Arpaio’s fanatical aim to target brown people for harassment and possible deportation. Under a contract with the feds called 287(g), Arpaio’s local deputies can enforce federal immigration law, a practice that has long been criticized by those who say Arpaio should concentrate on local issues rather than international migration. The latest outrage involving Arpaio’s department draws attention to three Phoenix-based sheriff employees, arrested for their roles trafficking drugs and human beings across the US/Mexico border.

Marcella Hernandez and Sylvia Najera are two detention agents who worked at one of Arpaio’s notorious jails; Alfredo Navarrette is a deputy who, for the past decade, enjoyed a post in the sheriff’s anti-smuggling unit. All three were arrested this week with about a dozen others, on suspicion of cross-border smuggling. Hernandez is said to be eight months pregnant with the child of a leader of a Sinaloa drug cartel. The so-called “Toughest Sheriff in America” snubs critics who denounce his enforcement of federal immigration law, and claims that his deputies are trained and certified by the Immigration and Customs Enforcement Agency to use 287(g). In this case, Both Hernandez and Navarrette were trained and certified — yet both now face charges for their roles in international smuggling.

It’s unlikely this latest scandal will result in Arpaio’s displacement, or in a federal indictment. Arpaio may be at a relative advantage with this particular investigation because his own department conducted it internally, and he posed for cameras at a press conference, discussing the arrests. For the time being, Arpaio remains sheriff of the nation’s sixth-largest city, a position he’s held for nearly 20 years. And for the time being, the Obama administration has yet to indict Arpaio on any one of several unsettling allegations — staying about as quiet regarding Arpaio as it has been regarding immigration in general. Despite Supreme Court rulings, a 19th century, Wild West-style state, an extremist, nearly 80-year-old Sheriff Arpaio and a neglectful Obama administration, migrants continue to flock to Arizona: 108 undocumented migrants were located at a “drop house” in Phoenix earlier this week.