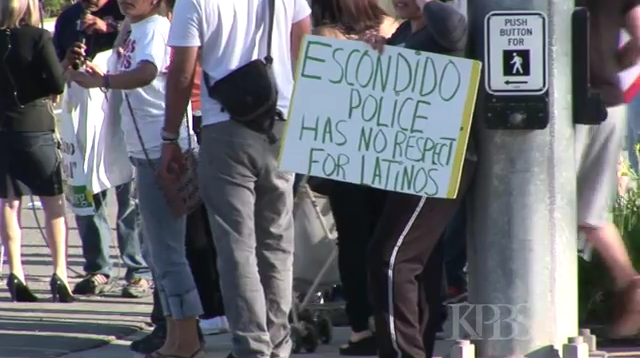 A still from the KPBS broadcast, "Escondido Police Under Fire," by John Carlos Frey

The chief of police in Escondido, CA, insisted I interview him. Chief Jim Maher had “an immigrant-friendly agenda,” he said, and was a friend to Latinos. He had done nothing wrong, and the media and activists were just spreading lies.

I was sitting in the Escondido Police Department, camera rolling for a two-hour interview, talking with Maher about the city’s DUI checkpoints. I had read several well-researchedarticles about these checkpoints and the millions of dollars that were changing hands, all under the guise of getting drunk drivers off the road. A commendable and perfectly legal effort, to be sure. But also legally questionable, as I found out in the course of my investigation.

Until my conversation with Chief Maher, my investigation — which was broadcast on KPBS, and accompanied by a radio segment, and an online story — was to be about racial profiling of the undocumented immigrant community in Escondido. I had heard tales of the anti-immigrant stance of the city — which was 49 percent Latino — for years. As an independent reporter working with a nonprofit, the Gatekeeper Foundation, instead of a news agency, I had to raise money to fund the many months of gathering facts, interviewing residents, and researching Escondido’s policies that would form the foundation of my story. It was at one of our fundraisers in Escondido that I met the man who would lead me to Jim Maher.

He blended into the small, mostly sympathetic crowd. He was a friend of the chief of police, and he listened as I explained that our nonprofit collects information and puts together stories about the undocumented immigrant community as well as other marginalized communities nationwide. “We try to tell the stories the media knows very little about,” I told the crowd. I imparted statistics, handed out information, and screened a short video about the need to raise public consciousness through media outlets. The chief of police’s friend did not contribute financially that night, but by taking my handout directly to his powerful friend, he profoundly changed the focus of my investigation.

A couple of days after the fundraiser, Maher called on my cell phone. He told me he knew that I was trying to dig into the anti-immigrant policies of the Escondido police. Without taking a breath, he began to defend his police department and their tactics. I did not have to ask him a single question. He spoke to me for almost half an hour, trying to convince me that he was not a racist and he was an immigrant-friendly chief. He had received a bad reputation from all the negative media attention that Escondido had received for their policies toward immigrants, he said, and he was constantly being misrepresented. “We have more outreach programs to the Latino and immigrant community than any other police agency in the county,” he protested.

Maher offered to do an on-camera interview. That’s how I found myself, several weeks later, in a conference room in the Escondido Police Department. Maher had just returned from the international police chiefs convention in Chicago, where ICE officials had presented him with a trophy honoring his department’s work on immigration.

I had come to Escondido to research the accounting practices and revenue streams that the DUI checkpoints generated. I wanted to look into the city’s impounding of cars and their tow fees, their grant programs and the exact dollar amounts received. I wanted to follow the money. My initial plan did not call for interviewing the chief of police — until he called me.

Most of our conversation was dry, full of uninteresting information about how DUI checkpoints work. I already knew most of it.

But when he started talking about ICE (Immigration Customs Enforcement) agents within the Escondido police department, I sat up and took notice.

“We ask ICE officers to be available during the checkpoints,” he said. People “want us to stop the checkpoints, because it’s such an easy way to catch unlicensed drivers.”

What did immigration agents have to do with catching drunk drivers? Maher went on to explain that ICE conducts immigration checks on unlicensed drivers who go through checkpoints. The immigration agency looks up the names of those individuals who cannot produce government ID; if they discover that the unlicensed driver is undocumented, depending on the circumstance and at the discretion of ICE, he or she is arrested and deportation proceedings begin. Immigration is a priority, he said, at these checkpoints.

That immigration officials were actively participating in taxpayer-funded DUI checkpoints, intended only to deter impaired driving, seemed suspicious, as if the Escondido PD had been deputized as immigration officers. A city with an almost 50 percent Latino population would have many undocumented immigrants, and all of them drive without a license because state law prohibits undocumented immigrants from obtaining one. The authorities in both Escondido and ICE would know this, and their use of DUI checkpoints to check immigration status seemed too convenient.

The chief gave me, without my direct intention, a solid way into the story. From this remark, I gained insight into the misuse of a DUI checkpoint. Maher claimed that he was a friend of Latinos, but how could he not know that many within that community have undocumented immigrants as friends and family members?

For my investigation, which I did end up raising money for, I spent most of my time and resources looking into dollar amounts, spreadsheets, and legal documents. I used the assistance of three forensic accountants, lawyers, and expert law enforcement aides to understand the business practice of DUI checkpoints.

We uncovered the padding of expenses, misrepresentation of facts, and apparent fraud in the Escondido PD. And I have the Escondido Chief of Police to thank for my best lead.