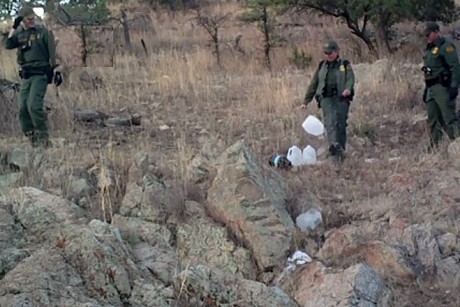 A hidden camera set up by the group No More Deaths shows Border Patrol agents destroying water left in the desert for migrants to drink. | Credit: THE NATION INSTITUTE COURTESY OF NO MORE DEATHS

The US Customs and Border Patrol has been in the headlines for the past few weeks — and for all the wrong reasons. There was the investigation I led into acts of abuse by border officials that aired on July 20 on PBS Need to Know, in partnership with The Investigative Fund, now known as Type Investigations, now known as Type Investigations. The second in the “Crossing the Line at the Border” series, it tackled acts of verbal abuse, sexual assault, acts of torture, and more by border officials. We had clandestine footage of border patrol agents destroying water jugs left out by humanitarian groups in the desert near migrant trails where clusters of bodies have been found. We had allegations of massive, dangerous overcrowding in the cells, the deprivation of food and water, even the withholding of medical attention from sick migrants. It contradicted CBP’s policy of humane treatment of migrants in their custody.

The border patrol agency, when contacted for their response, had only this to say: “Border Patrol agents are required to treat all those they encounter with respect and dignity. This requirement is consistently addressed in training and consistently reinforced throughout an agent’s career.”

They didn’t refute a single claim, or even acknowledge a specific allegation.

Then there was the recent case of excessive force used by a CBP official in a case that made the headlines last week when a San Diego family accused the border patrol of overstepping their authority.

It all began last summer, when an off-duty border patrol agent had an altercation with two San Diego residents at Los Taquitos Taco Shop in Chula Vista, CA. Josue Torres and Jamie Santillanes were at the restaurant where the agent, Carlos Hinojosa, said the duo threatened him with a knife and then beat and robbed him. According to an audio tape obtained by the local ABC News affiliate, Hinojosa refused to call 911, instead calling a co-worker to complain about the incident.

Three weeks later, in August 2011, more than 50 armed men surrounded Josue Torres’ house where he lived with his extended family while helicopters buzzed outside. According to ABC News, the border patrol agents were looking for evidence at the home because, as one agent told a startled family member, “We take care of our own.” Agents pulled family members out of the house at gunpoint, interrogating and even allegedly using excessive force against them before arresting Torres and his cousin Santillanes. The pair was charged with multiple felonies, including robbing and harming Agent Hinojosa.

The court proceedings revealed that Hinojosa didn’t show a badge or identify himself as a border patrol agent the night of the incident. According to his report, he somehow “knew the subjects were nefarious,” possibly even gang members, though later police reports showed no gang ties. The jury came back with a verdict of 10-2 — in favor of innocence.

When asked about specifics of the incident and the case, Border Patrol Supervisor Steven Pitts told ABC News, “The overwhelming majority of Customs and Border Protection employees and officers perform their duties with honor and distinction.” Again, there was no explanation — why was the Torres family subjected to a raid? Would Agent Hinojosa be reprimanded for making false accusations against Torres and Santillanes?

CBP has plenty of prepared statements that it issues in such cases. There’s the one on the extensive training that agents get, and the exemplary way that most of them discharge their duties. But when a force numbers in excess of 60,000, even a small percentage abusing their authority adds up to a large number of cases. And if there’s a subject that CBP will not address, it’s that the number of civil and criminal cases against border patrol agents is on the rise.

Perhaps our July 20 broadcast will help hold their feet to the fire. It helped make the abuse public, and as a result, the grassroots advocacy group the Southern Border Communities Coalition (SBCC) sent a delegation to Washington, DC to demand some answers. They brought former border patrol agent Ephraim Cruz, who was featured in the Need to Know episode, with them. The delegation even met with acting Commissioner of U.S. Customs and Border Protection David Aguilar who according to SBCC Director Christian Ramirez did not deny or take responsibility for any of our findings, which revealed serious violations of stated border patrol policy.

Commissioner Aguilar admitted he had watched the Need to Know episode; during their meeting, Ramirez said, Aguilar “was defensive and seemed aggravated by the report. Although he was not specific, he felt the episode was a campaign against the Border Patrol.” He did not apologize for the actions of his agents, and neither did he pledge to take action to correct agents’ behavior.

SBCC’s other meetings in the capital were more fruitful: the delegation also met with several Members of Congress and urged them to watch the episode. As a result, six Members of Congress issued a joint press release in which they “expressed grave concerns about the agency’s commitment to preventing the mistreatment of detained immigrants.”

We are grateful for this statement, but abuse victims need more than words. The Department of Homeland Security, which oversees the Border Patrol, and the Office of Inspector General, which is responsible for investigating allegations of abuse, have issued no comparable statement. CBP’s response, once again, came in a statement that avoided any specifics: “CBP employees and officers perform their duties with honor and distinction… We do not tolerate abuse within our ranks, and we fully cooperate with any criminal or administrative investigations of alleged misconduct by any of our personnel, on or off duty.

Here’s to hoping that there will be an investigation of alleged misconduct that they can cooperate with.