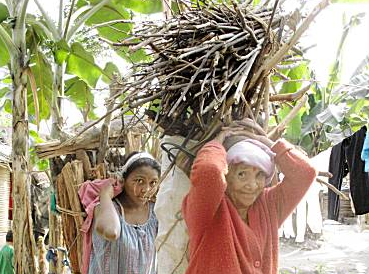 The impressive necklace of cliff-perched fortresses that dot this Himalayan nation’s mountainous perimeter are a testimony to Bhutan’s long-standing effort to keep out foreigners.

In the 1980s, however, the tiny Buddhist nation of just 600,000 sandwiched between the People’s Republic of China and India found itself with what it considered to be a foreigner problem.

Bhutan’s minority population of ethnic Nepalese had mushroomed to represent one-third of the population, causing then-King Jigme Singye Wangchuck to start a “one nation, one people” policy to deport and strip many of their Bhutanese citizenship. The campaign ended with the expulsion of about 105,000 Nepalese through beatings, torture and murder committed by the Royal Bhutan Army that lasted until the early 1990s, human rights groups and deportees say.

“We left because we were scared that they would imprison us, that they would beat us, that I would be raped,” said Matimya Moktan, 41, who arrived in Nepal in 1991 and now lives in a small mud stick hut with her three children and husband in one of seven refugee camps in eastern Nepal.

Locked in political limbo, these camps have become breeding grounds for a fledgling militancy that seeks to overthrow Bhutan’s monarchy just two years after the king abdicated in favor of his son, Jigme Khesar Namgyel Wangchuck, who heads a constitutional monarchy that permitted the nation’s first democratic elections last year.

“This (insurgency) is something Bhutan needs to be worried about,” said an intelligence official in neighboring India who spoke on condition of anonymity because he is not authorized to speak to the media.

Analysts say the Maoist insurgency in Nepal – which ended in 2006 – inspired Bhutanese refugees after Nepal’s King Gyanendra was forced to abdicate and a new government formed with former rebels.

The ideological affinity with the Nepalese Maoists is evident in the literature the Bhutanese militants disseminate and the similar names they use to describe their movement: the Communist Party of Bhutan, Tiger Forces, the United Revolutionary Front of Bhutan and United Refugee Liberation Army.

“We are preparing a protracted people’s war,” said a 27-year-old leader of the Communist Party of Bhutan.

“Like every Maoist struggle in the world, we use home-made guns, knives and explosives. After a certain point, we will progress to a high-tech war,” the rebel, who goes by the name Comrade Umesh, said, referring to automatic rifles, machine guns, powerful explosives and detonation devices.

Indian intelligence sources say these refugee militants may soon acquire such weapons through a recent alliance with two Indian separatist groups: the National Democratic Front of Bodoland and the United Liberation Front of Asom operating in the states of Sikkim and Assam located between Nepal and Bhutan.

The insurgency, however, has been limited to occasional bombings that have damaged bridges, fuel depots and electrical transformers in southern Bhutan and the capital of Thimphu. To date, there have been no deaths and just one injury, a woman who suffered a minor shrapnel wound, according to Bhutan’s national newspaper, Kunesel.

Bill Frelick, refugee policy director for Human Rights Watch, says the insurgents, who are believed to number between 600 and 1,000, are still too weak to launch an effective revolution. But other analysts say the alliance with militant Indians, the continuing relocation of refugees and recruiting forays into Bhutan are worrisome signs.

In 2006, the United States and a handful of other Western countries offered to resettle more than 70,000 Nepalese refugees. About 7,000 have already left the camps and the rest will be gone within four years, according to the U.N. High Commissioner for Refugees.

Frelick said the insurgents could take advantage of the resettlement program by using future remittances to buy weapons and having camps void of more restrained voices. “You could end up with all the more moderate people leaving the camps,” he said.

Meanwhile, the militants regularly cross into Bhutan through thick jungles that straddle the porous border to lecture and train ethnic Nepalese residents who remain in Bhutan, refugees say.

“If all we had to show were our weapons, we wouldn’t get very far,” said Umesh. “So we teach our ideology and train cadres in making explosives and in guerrilla fighting. We are laying the groundwork in Bhutan both ideologically and militarily.”

While the government hopes the nation’s fledgling democracy will keep the estimated 100,000 Nepalese in Bhutan from insurrection, the rebels predict their ranks will increase, citing a lack of state services, special travel permits required to leave the south and a ban on Nepalese from becoming citizens.

Perhaps with that in mind, the government plans to reopen 15 schools and build more health centers in Nepalese areas by the end of the year.

“The best way a country like Bhutan can defend itself and prevent security problems … has to be through the people,” said Prime Minister Jigme Thinley. “By the end of five years, there will be absolute parity in terms of the provision of … services and infrastructure. This is how we can prevent conditions for discontent and disaffection from growing in our country.”

Since the late 1800s, Nepalese workers have migrated to southern Bhutan in search of farmland and a better life. The region, which is warmer and prone to malaria, had long been shunned by the nation’s majority Drukpas, who prefer cooler northern areas.

By the mid-1980s, ethnic Nepalese made up roughly 30 percent of Bhutan’s population, retaining their culture, language and Hindu religion, even though many were Bhutanese citizens and had little contact with Drukpas or the government of then-King Jigme Singye Wangchuck.

That changed in 1985 under the king’s “one nation, one people” campaign, which mandated all citizens to adopt Drukpa dress and speak the Dzongkha language. Many Nepalese were stripped of their citizenship if they lacked the papers to prove residency prior to 1958. “Deep inside, they knew they never belonged to this country,” said Bhutan Prime Minister Jigme Thinley.

By 1991, tens of thousands of ethnic Nepalese were forcibly evicted from the country or fled voluntarily in the face of officially sanctioned pressure, including “arbitrary arrests, beatings, rape, robberies and other forms of intimidation by the police and army,” according to a 1994 report by the U.S. State Department.

About 105,000 Nepalese eventually crossed into India, where they were trucked to seven camps in eastern Nepal under the supervision of the U.N. High Commissioner for Refugees. In Nepal, they have remained stateless, even though they share the same ethnic and cultural background.

Some historians say the backlash was a response to the demographic threat. Others say the monarchy feared anti-royalist and Maoist ideologies that were gaining momentum at the time in Nepal.

Research assistance provided by the Investigative Fund of the Nation Institute in New York.