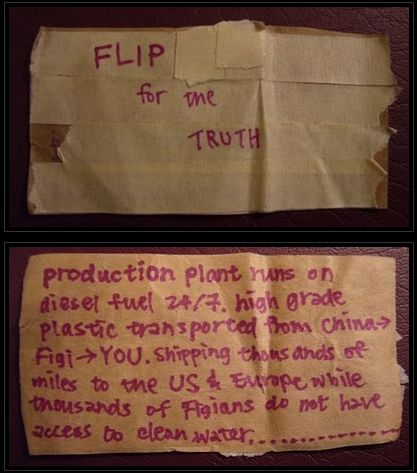 A notice pasted to a bottle of Fiji Water at a Whole Foods in New York on February 25, 2010 | Credit: JEFFREYTWENTYSEVEN

Anna Lenzer's Fiji Water investigation from late last year is still making waves. After tearing up the Twittersphere for months, attracting defensive counter-Tweets from Fiji Water owner Lynda Resnick, and being reprinted as far and wide as the UK and Australia, the investigation started to leak into foodie circles.

One waiter at a trendy Los Angeles restaurant Tweeted that a customer asking for Fiji Water got an earful from him about just why they don't serve the stuff — that Fiji Water profits off of a tax-free sweetheart deal from a military junta, that half of Fijians don't have potable water, that those classy square containers use twice the plastic of most other bottled waters — only to find out he was serving Resnick herself!

Food co-ops such as Co-Opportunity in Santa Monica started posting Lenzer's article for their customers.

And now blogger JeffreyTwentySeven, who says he works at a Whole Foods in New York City, posted these photos of the work of a DYI propagandist, who spread the word by taping a homemade sign to a bottle of Fiji Water. In case you can't read the eloquent scrawl, it says: “production plant runs on diesel fuel 24/7. high grade plastic transported from China —> Figi —> YOU. Shipping thousands of miles to the US & Europe while thousands of Figians do not have access to clean water....”

As Mother Jones blogged in response, “Thanks for spreading the word, Fiji Water guerrilla, wherever you are.”

Why not send us your own pix of homemade efforts to spread the word that Fiji Water isn't as “green” as the company claims...